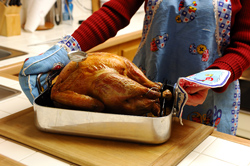 Turkey is the center of many traditional holiday meals. First, choose the right sized turkey for your gathering. Thaw the turkey safely using one of our 3 recommended methods. Don't wash the turkey before roasting because washing can spread bacteria around your kitchen (proper cooking kills any bacteria on the turkey). Cook stuffing outside the turkey to ensure it reaches a safe temperature. Since turkeys are cooking faster than before, see our roasting section for cooking times. Lastly, refrigerate any leftover turkey within 2 hours of cooking.

Turkey provides protein along with other key nutrients. A serving is 3 ounces cooked poultry (about the size of a deck of cards). One serving of roasted, skinless turkey provides:

Use the following chart as a helpful guide to determine how much turkey you need: 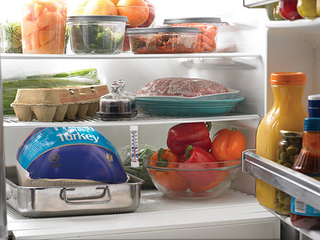 While thawing, turkey must be kept at a safe temperature (below 40 F). There are three safe ways to thaw a turkey:

1. Thaw in the refrigerator.

3. Thaw in the microwave Oven.

Review of studies from several universities related to washing meat and poultry indicates that there is no benefit. In fact, washing can allow bacteria on meat and poultry to spread to other ready-to-eat foods. Therefore, the USDA does not recommend washing your turkey before cooking. Cooking to proper temperature will destroy any bacteria present.

The USDA does not recommend washing your turkey before cooking.

If you must wash the turkey

You have to clean and sanitize sink surrounding countertops. 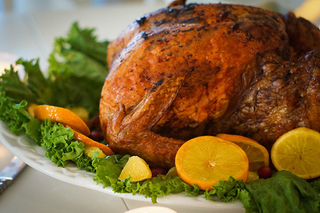 According to the U.S. Department of Agriculture (USDA) stuffing a turkey is an invitation for trouble. You risk the possibility of foodborne illness. The stuffing may not reach the 165 F temperature needed to kill bacteria.

The University of Georgia tested turkeys to determine cooking times and techniques. The study concluded that stuffing should be cooked outside the bird since there is no guarantee that the stuffing will reach 165 F at the same time the turkey reaches this temperature. If the stuffing has not reached 165 F when the turkey is done, further cooking will be required. Therefore, the meat may be overcooked. For optimal safety and uniform doneness, cook stuffing separately. You can get the same flavor if you precook stuffing to 165 F. Then loosely stuff into the turkey during the last half-hour of cooking.

If you must stuff the turkey

Turkeys are cooking faster than before