When Brigid Tuck was growing up in Le Sueur, her mother went to work every morning and her father got the kids off to school. And every day, she says, “Dad would shout after us while we were walking to the bus. ‘Remember! You can make a difference!'”

Since 2008, Tuck has been making a difference for Minnesota’s communities and industries. As Extension’s economic analyst, she knows that decision-makers have a daunting amount of data available, so she guides them to ask the right questions, and her reports and presentations provide a thorough interpretation.

She and her husband are raising their three children on her family’s original homestead in Le Sueur, where she chairs the local school board, so she crunches those numbers from Extension’s regional office in Mankato. Moreover, a good deal of her work happens all around the state. “When I started my job, a colleague said I’d probably spend all my time locked in my office,” Tuck says. “Turns out, I spend more time out in communities than I do in my office.”

Telling the story with numbers

Her analysis shows clearly that, though agriculture and mining are still important drivers, professional services, health care, tourism and other industries create a diverse economy in rural Minnesota. Now, she consistently reminds her audiences that “this isn’t your grandmother’s rural economy.”

“We want to help Greater Minnesota see all of its economic assets, and be able to tell their story,” Tuck says. She has continued to do that with her Getting to Know Greater Minnesota's economy 2019 update. 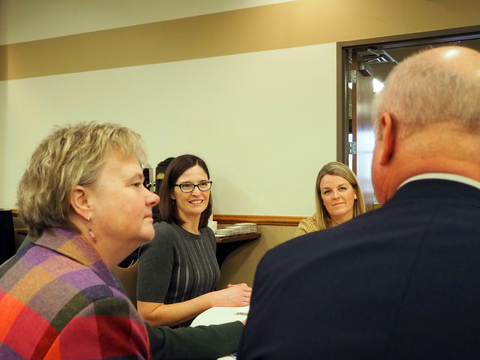 From recreational trails, to wineries, Tuck’s analyses help communities understand the contributions of their unique assets. Take, for example, the Iron Range’s curling culture. While not known everywhere, curling has passionate fans and a rich history. Leaders of the Range Recreation and Civic Center (RRCC) in Eveleth engaged an Extension team to examine those contributions.

"The little-known sport of curling is getting famous since our Minnesota-based Olympic team won the gold in 2018,” says Ardy Nurmi-Wilberg, a consultant working with area organizations. “We wanted to seize this opportunity to tell the whole story of what curling, and the center that was built by curlers, offers to the region. And we wanted all of the local partners to understand that the arena was worth their investment."

The Quad Cities of Eveleth, Gilbert, Mountain Iron, and Virginia came together to build the RRCC, a multi-million dollar curling facility and event center.  They jointly own the property, but it is managed by the Curl Mesabi Curling Club. Tuck worked with Xinyi Qian, Extension tourism educator, and John Bennett, Extension economics educator, to conduct profiles of users and visitors of the center, as well as an economic impact analysis.

The study found that the Center creates important connections—between communities and among young and old curlers, for example—while also preserving the Iron Range's curling culture. The study also found that in 2017, the Range Recreation Civic Center supported $2.4 million in economic activity in St. Louis County. In fact, for every dollar invested by RRCC partners, $7.80 was generated in the county.

Qian notes that some of the most successful community tourism ideas build on assets like curling, with authentic ties to local culture: “When communities understand their unique opportunities, they can attract visitors. More importantly, they can support quality of life for residents, too.”

Nurmi-Wilberg is one of the local leaders who is thinking about these opportunities, and she appreciates the help. "Through Brigid, the University is here to help us. I learned so much from her. I can talk to people about economic impact now. I know what questions to ask."

Curling may not be of statewide significance, but it is part of the diversity and interdependence of regional economies that Tuck emphasizes when she educates community groups. "Growth in one industry only helps other sectors, and a strong business mix keeps the tax burden off the back of just one industry,” she says.

That’s not to say traditional rural industries should be forgotten. In fact, Tuck saw how stable agriculture prices helped Greater Minnesota's economy during the great recession, although many farmers are hurting right now.

“Our economic drivers in rural and urban Minnesota have much more in common than people assume,” says Tuck. “Sure, the Twin Cities has double the number of jobs in professional and business services than Greater Minnesota has, and the Twin Cities doesn’t have agriculture or mining. But we share an interest in the same industries, even in the same order. That’s a good reason to work together as we create Minnesota’s future.”

Tuck’s commitment to Minnesota will continue to take her to communities from border to border, working with her teammates to help communities know and tell their story.

“I honestly believe that our communities are what we make them,” says Tuck. “My job is to help Minnesotans make them better."

Many factors have affected Minnesota's economy over the past five years since, in 2014, Extension's economic impact analyst, Brigid Tuck, took a thorough look at the economy in each of Minnesota's regions. 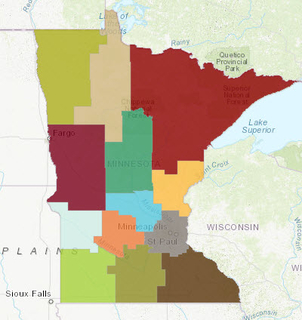