As soon as the field is passable in early spring, mow or chop the old asparagus ferns with a brush hog mower or flail chopper if not chopped in the previous fall. Alternatively, they can be burned down with a controlled burn. Burning helps eliminate asparagus beetles that have overwintered in the old ferns.

Broadcast phosphorus and potassium fertilizers (as recommended in Nutrient management) and give the entire field a very shallow disking (1-3 inches). Do not delay disking or disk too deep, as doing so can considerably damage the spears just below the soil surface and let in disease organisms.

Spears are harvested when they are between six and 10 inches long. Harvesting can be accomplished by breaking the spears off or using a pronged knife. 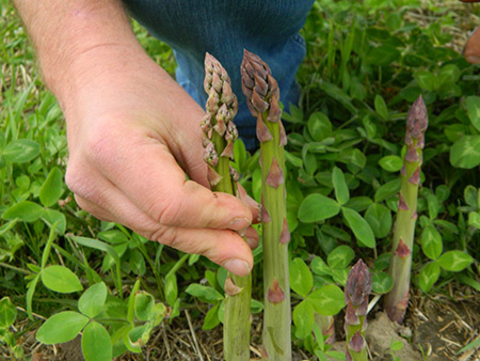 Using a knife increases time and labor costs compared to snapping spears by hand. Additionally, using a knife may reduce your precision and may make you more likely to accidentally cut nearby spears that are still developing; developing spears injured by cutting will not grow properly. The advantage of using a knife is that it allows you to cut spears below the soil where the base of each spear is white and woody. This tissue is less prone to water loss, and so the harvested spears retain their quality longer.

Harvesting by hand has a different set of advantages and disadvantages. Snapping severs the spear aboveground at the point where it is tender, which reduces the shelf life of your asparagus. However, harvesting by hand is faster, easier and less likely to result in damage to nearby spears.

Harvesting may have to be performed every two days at the height of the harvest season (late May to early June). Spear emergence greatly increases in response to warm temperatures and slows considerably with cold temperatures.

Because asparagus spears emerge so early in the spring, Minnesota growers should expect a night or two of freezing temperatures to occur early in the harvest season. If a hard freeze or frost is in the forecast, harvest all spears in the field regardless of size. These can be marketed as tender, early-season “shorties” at farmer’s markets and farm stands, or used for value-added goods like soups and pickled asparagus.

Asparagus should be refrigerated upon harvest. For farmer’s markets and farm stands, they are typically packaged as one pound bundles tied with rubber bands. Store the bundles standing up in a bin, in a humid environment, or in a container with a shallow amount of water to prevent drying. For restaurants and foodservice, the spears may be sold in small flats or according to the customer’s specific requests.

When to stop harvesting asparagus

Harvesting for too long stresses the plants, potentially reducing yield the following year. Spears are really the stems of the plant, so removing too many spears (stems) depletes the sugar reserves in the crowns and causes a gradual decline in plant health.

In Minnesota, the asparagus harvest season in a mature stand (over three years old) is six to eight weeks long and ends in late June or early July depending on the year and location in the state. Dry weather can cause the season to end sooner, and a late spring or more northern latitude may cause the season to start and end later.

Three signs to stop harvesting include:

Daily harvest weights gradually decrease after the peak harvest in early June. Keeping daily records of how many pounds are harvested every day will help determine when spear growth starts to slow down and when it is time to stop harvesting. Harvest generally ends by July 1 in most of Minnesota.

Plantings less than three years old should have an abbreviated harvest. A one-year-old patch (planted one year ago) may be harvested for up to one week. Young crowns have not yet built up large enough energy reserves to withstand full harvest periods. While many growers in Minnesota choose not to harvest from one-year-old stands at all, some will harvest one or two times within one week and then stop. This allows the plants to establish extensive root systems and accumulate sugar reserves.

At the end of harvest season, harvest all remaining spears regardless of size. Then proceed to clean up and renovate the beds in preparation for fern growth, described in the next section.

Managing an asparagus stand after harvest

Asparagus is low maintenance after harvest, but it is not zero-maintenance. Postharvest tasks to keep the field healthy include moderate weed management, fertilization and, in some cases, irrigation. These tasks should not take much time, but ignoring them may decrease plant health and vigor the following year. In the very late fall or following spring, cut or burn down the old ferns.

Nitrogen fertilizer can be applied immediately after the last harvest, and before fern growth, to encourage maximum fern size, photosynthesis and energy storage.

By the end of harvest, weed pressure may be heavy in the asparagus stand, especially if herbicides were not used. Remove weeds after harvest and before ferns start to grow. This prevents weeds from producing seed and reduces competition for the ferns.

Hand-pull large weeds and perennials. Immediately after removing all remaining spears, the rows can also be mowed once. Cultivation, cover crops, flaming and mowing can be used between the rows. One pass of a mower or flame weeder will not kill thistles, so those must be hand-pulled.

To kill small emerged weeds (less than three inches) and prevent new weed emergence, apply a pre- and post-emergent herbicide mix postharvest. You must apply this in the small time window between the final spear harvest and fern growth, so it is best to do it the same day as the final harvest and fertilization. Plan the final harvest for a time when fertilizer and herbicides can be applied immediately afterward.

In times of severe drought or if the asparagus is grown on very sandy soils, irrigation can help maximize fern growth and subsequent yields.

The asparagus ferns gradually die in the late fall, turning brown by winter. As they die, they transport carbon and nutrients down to the roots for winter storage. The ferns must be removed every year once they are completely yellow or brown. Do not remove green ferns, as this decreases energy storage in the plants.

Remove ferns in the late fall or early spring. When possible, late fall is preferred, to eliminate insect pests that overwinter in the ferns. However, fall fern removal is rarely possible in Minnesota because the fields usually become covered in snow while the ferns are still green. Most Minnesota growers wait until spring to remove the ferns.

Remove ferns from the crowns by chopping, mowing or burning. In spring, it is best to remove them from the field and burn or compost them elsewhere in order to minimize asparagus insect pests like asparagus beetles and pathogens that have been overwintering in the ferns.

Don't till the ferns into the soil as it contributes relatively little organic matter and can create insect pest problems.