All in-person Extension meetings, events and classes are canceled through Friday, May 15.

A quick guide to asparagus 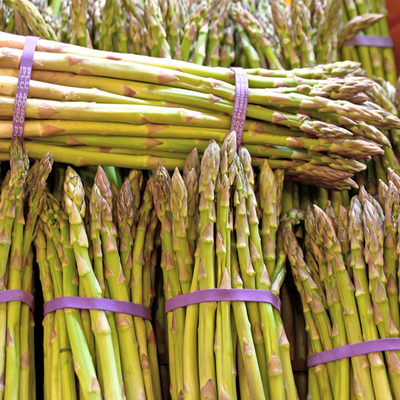 Asparagus (Asparagus officinalis) is one of the earliest harvested vegetables each spring. Asparagus spears are crisp, tender and flavorful.

Asparagus is a perennial plant that comes back from the same root system every year. It needs the rest period that freezing winters provide.

The edible part of the plant is the shoot, or spear, that emerges from the soil. Later in the summer, these shoots will develop into tall plants with fine leaves or ferns.

The fern creates energy that will be stored in the underground portion of the plant to produce the following year’s spears. It is important to take care of the ferns even after the harvest is over to make sure you will have good future harvests.

A planting of asparagus can last 15 years or more, so choose the spot for an asparagus bed carefully.

Most people start asparagus from purchased crowns because it is easier, and you grow a crop at least one year earlier than if planting seeds. Purchase one-year-old crowns. Older crowns are more prone to damage during transplanting.

Asparagus crowns will continue to grow both vertically and horizontally over several years. Planting at the right depth is important. Planting too shallowly could result in early spear emergence in the spring, increasing risk of freeze damage and winterkill of the crown. Starting with deeply set plants will help the planting live a long time.

How to keep your asparagus plants healthy and productive

If perennial weeds begin to infest the asparagus bed, dig them out in late fall after frost has killed all of the ferns. Do not dig too deeply, and try to leave the ferns in place. They will catch and hold snow on the bed, warming the crowns.

If female plants set fruit, each red berry can contain up to eight seeds. Volunteer asparagus plants can become the worst weed in the asparagus bed, so remove ferny seedlings.

The most common insect pests on asparagus in Minnesota are the common and spotted asparagus beetles. They damage asparagus by feeding on the spears, resulting in browning and scarring. Their feeding can also cause asparagus shoots to bend over making them look like a shepherd’s crook.

In spring, spears will start to emerge from the soil. The first spring, a year after planting the crowns, do not harvest any spears. Allow the spears to become ferns and build the strength of the crowns.

The second spring after planting crowns, if the plants were strong and healthy during the previous growing season, begin to harvest when the spears are six to eight inches long. In the first year of harvest, only pick asparagus for two weeks. After that, allow the spears to develop into ferns.

In the following years, harvest asparagus up to July 1. Some gardeners will not harvest during the second year at all, preferring to allow the plants to build more strength before finally beginning to harvest in the third year.