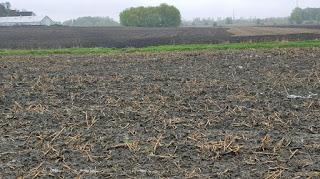 Unseasonably cold temperatures, wet conditions and snow can impact soybean planting in much of the Upper Midwest. Here, we outline the key factors for successful soybean planting.

Pay attention to the five-day forecast prior to planting, and avoid planting when the near-term forecast calls for extreme cold and wet weather.

The lack of oxygen in saturated soils and the formation of a soil crust of even modest strength can almost eliminate soybean emergence.

Planting in cool and wet conditions also may lead to poor germination and seedling diseases caused by pathogens such as Pythium. Extended cold and rainy periods after planting can magnify these problems.

Recent planting date research at the University of Minnesota supports the historical planting date data shown above. However, we’ve found that soybean maturity somewhat affects the rate of yield loss.

Planting very full-season varieties (+0.5 maturity group (MG)) tends to produce greater overall yields, but only when planted by the first week of May. By mid-May, any yield advantage of longer-than-adapted varieties is lost.

You can plant a somewhat shorter-season variety (-0.5MG) through the end of May with little yield penalty. However, short-season varieties have a lower yield potential than adapted or longer-than-adapted lines.

It’s important to keep the maturity-switching recommendations in mind. The standard University of Minnesota guideline is that you should not adjust soybean maturities until June 10.

Soybean producers who start with very long-season soybeans should consider switching by June 1. Those who plant short-season soybean varieties can hold their maturities until late-June.