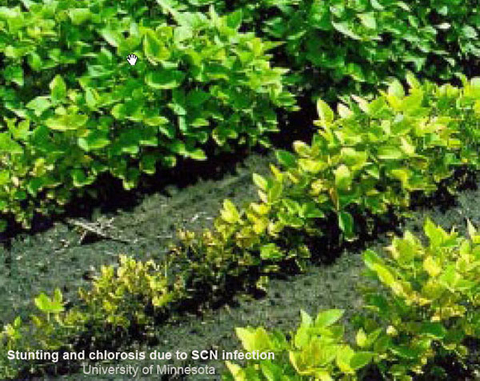 Soybean cyst nematode (SCN) is one of the most significant pathogens of soybean in most places where soybean is grown. It is widespread in Minnesota and has continued to spread into new areas and counties. Yield loss from SCN can exceed 30 percent. Soybean cyst nematodes are microscopic roundworms that infect the roots of soybean and other plants. Above-ground symptoms are not always visible, even with yield loss of 15 to 30 percent. Thus, SCN can be present in a field for years before it is identified. When symptoms are present, they are non-specific and similar to symptoms from other pathogens or abiotic stresses. Infection by SCN can also potentially increase other soil-borne soybean diseases such as brown stem rot, sudden death syndrome, and Fusarium root rot. 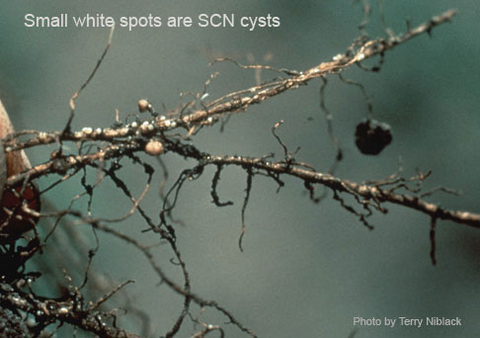 Juvenile (microscopic) nematodes enter the plant roots and start to feed. As they continue to feed on the roots, they swell as they mature. SCN is best diagnosed by gently digging roots from the soil and looking for females and cysts that are visible to the unaided eye or with a hand lens. Tiny white to yellow lemon-shaped females may be seen on roots starting the end of June and then throughout the rest of the season. The bodies of the females are white and fairly easy to see in the early and middle of summer, but turn brown late in the season and become more difficult to see.

Infected plants may become discolored (chlorotic), stunted, or necrotic due to feeding by the female nematodes. These symptoms tend to be more extreme in fields with high levels of SCN and when plants are stressed due to low fertility or drought. Highly infested areas in fields may be oval to somewhat elliptical in outline, with the most severe damage in the center with less damage toward the margin. 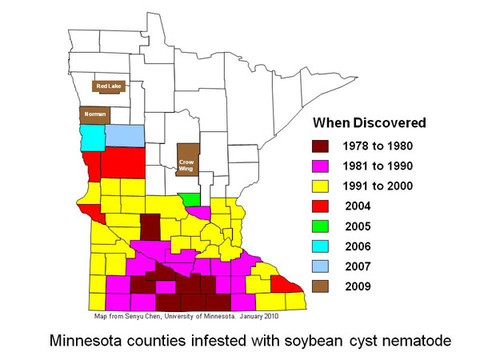 SCN is caused by the nematode Heterodera glycines. Cysts on roots can contain hundreds of eggs that are eventually released into the soil and can remain viable for years until a suitable host plant is found. Host range includes soybean and numerous legume and weed species. Many types of SCN (HG types, previously called races) occur that are pathogenic to different sources of resistance to SCN. Nematodes can be spread by anything that moves soil, such as water, wind, and machinery.