Soybean aphids are small (one-sixteenths of an inch or less), soft-bodied insects that use piercing-sucking mouthparts to remove plant sap.

Both winged and wingless forms can occur in the field. Their bodies are yellowish-green and pear-shaped, with a pair of dark cornicles (“tailpipes”) at the end of the abdomen. Winged aphids have a dark head and thorax (Figure 1).

During soybean pod fill, a small, pale-colored aphid form (referred to as white dwarves) may occur on leaves in the lower and middle canopy.

Presence of lady beetles and ants

The presence of lady beetles or ants on soybeans often indicates aphid infestation and can be particularly useful in finding small, isolated early-season aphid colonies.

It also encourages the growth of sooty mold fungus, which creates a black, powdery coating on leaves. As the season progresses, the presence of honeydew and cast aphid skins indicate high soybean aphid populations.

Some infestations can cause potassium deficiency symptoms on upper leaves. While inspecting plants for soybean aphids, be on the lookout for dead aphids, which may be indicators of beneficial organisms working to suppress aphid populations.

Aphid mummies are an aphid body’s dried, brown or black remains after tiny parasitic wasps have fed on it from the inside. Diseased aphids are discolored and fuzzy-looking (see Figures 22 and 23).

In Minnesota, soybean colonization by aphids can occur as soon as soybean emerges, and aphid populations can persist until soybean leaf drop. Begin scouting for soybean aphid on soybean in mid- to late-June and continue until R6.5 (pods and leaves begin to yellow), regardless of calendar date.

If you stop scouting too early, late-season infestations can build to economically damaging levels. Yield loss can occur into early R6 (pod cavity filled by seed). Because aphid populations can rapidly grow, scout infested fields on a weekly basis.

Yield-damaging soybean aphid populations can occur in any field. However, some fields tend to have more consistent problems with aphid infestations each year. Several factors increase the likelihood of aphid problems.

Early in the season

Later in the season

Later in the season, full-maturity soybean or late-planted soybean, such as beans following peas, are often reported to have higher populations.

Rigorous and possibly more frequent scouting of high-risk indicator fields can provide valuable information on when an area’s aphid populations are beginning to increase. Increases should trigger scouting of other fields you’re managing.

Scouting requires entering the fields and inspecting plants. By the time you can detect soybean aphid populations from the road, significant yield loss has likely already occurred.

Through timely and thorough field-scouting, you can identify and treat significant soybean aphid populations before economic yield loss occurs.

Through R5 (seeds developing, but pod cavity not filled), use the following economic threshold. All three conditions should be true before treating:

Count both adults and nymphs, including any white dwarves. However, avoid counting soybean aphid look-alikes, such as potato leafhoppers and whiteflies (Photos 3 and 4), as well as cast soybean aphid skins and dead aphids.

The previously mentioned economic threshold is based on the average of multiple plants selected from throughout the field and not just hotspots or field borders. Avoid making treatment decisions based on field borders.

Small aphid hotspots often collapse from predation, parasitism or emigration. On the other hand, once a high percentage of the field’s plants have aphid colonies, aphid numbers (aphids per plant) can rapidly increase.

Though an economic threshold hasn’t been developed for R6, infestations in early R6 may require treatment if aphid populations are very large and plants are experiencing other stresses.

Soybean aphid numbers can be deceiving. Economic threshold levels may be present, but not obvious without close inspection. The small dwarves and nymphs, as shown on the leaves in Figure 11, can make accurate estimates difficult.

This method can save time and is relatively easy to use. However, you get less information about the population’s dynamics and the method can over-recommend treatment.

In each 50-acre area of soybean, initially inspect 11 plants in this manner and tally the numbers of infested and un-infested plants. From those results, decide to treat the field, not to treat the field or inspect five additional plants.

To account for the tendency to over-recommend treatment, confirm the decision to treat a field by resampling the field in three to four days.

This method is based on the same economic injury data as the 250 aphid per plant threshold used in the whole-plant sampling method. In other words, this is not a new economic threshold of 40 aphids per plant. The time savings with this method may reduce later in the season when aphids are distributed lower in the canopy.

Managing aphids and other considerations

Many of the foliar insecticides labeled for soybean aphid are effective. However, there’s no guarantee of a return on the insecticide investment, because soybean aphid populations may crash at any time.

Using the economic threshold mentioned earlier—250 aphids per plant on 80 percent of the plants, with aphid populations increasing—to trigger insecticide applications should minimize this risk.

Detectable soybean yield loss doesn’t occur at aphid densities below the economic threshold of 250 aphids per plant (for a short period).

Applying insecticide at aphid densities below this threshold, such as 5, 50 or 100 aphids per plant, is unlikely to save yield and may result in treating a large percentage of fields where aphids would never develop into yield-threatening problems.

Treatment below the economic threshold also increases the risk of negatively impacting beneficial insects (predators, pollinators) and the risk of aphids developing resistance to insecticides.

The longer large soybean aphid populations are allowed to persist on soybean, the greater the chance for an unacceptable yield loss.

Signs of soybean stress (nutrient deficiency symptoms, stunting or puckered leaves) indicate that some yield loss has probably already occurred. It isn’t advisable to wait until symptoms appear in large areas of the field.

The economic threshold of 250 aphids per plant remains valid despite changes in soybean and input prices. These price changes adjust the economic injury level (EIL), which is the point at which losses are sufficient to justify insecticide application.

However, the economic threshold of 250 aphids per plant is still sufficiently below the EIL to allow several days to make an insecticide application before losses occur. A lower economic threshold for soybean aphid isn’t justified at this time.

However, regularly scouting fields and using the threshold of 250 aphids per plant through the R5 stage should prevent most, if not all, yield-limiting aphid populations in R6. While the economic injury level for R6 soybean isn’t known, it’s believed to be higher than earlier stages.

Late-season treatment decisions are complicated by the uncertain timing of aphid movement back to buckthorn, which can occur as early as mid-August and as late as soybean leaf drop in October.

Finally, pay particular attention to insecticide pre-harvest intervals (PHI), the amount of time required between pesticide application and harvest as stated on the label. They can remove fields from insecticide consideration.

Over time and soybean growth stages, the position of soybean aphid populations change within the soybean canopy as the aphids track changing nutrient levels in the plants.

Early in the season

Early in the season, aphids tend to be located on new growth in the upper canopy. During this time, examining upper leaves is a quick way to determine the percentage of plants with aphids.

Later in the season

As soybeans near the R5 stage, the production of new leaves slows. When vegetative growth at the top of the plant ceases, aphids tend to move down the plant toward pods, stems and lower leaves.

At this later time of year, it’s often easier to find aphids on new leaves on lower canopy branches, non-senescing leaves (especially the undersides), stems and pods. Large numbers of aphids on the stems and pods generally indicate populations approaching, if not exceeding, 250 aphids per plant.

The presence of winged (alate) aphids may indicate the arrival or departure of aphids. Large numbers of winged aphids can be produced during late R4 and early R5 soybean growth stages, particularly if populations on individual plants are high.

These winged aphids can redistribute within the field or neighboring fields, but they may also move long distances with weather systems. When most of the aphid movement is out of an early-infested field, populations can decline up to 90 percent.

A very high percentage of aphid nymphs with wing pads is an indicator of a potential migration event. If such a field is close to the economic threshold of 250 aphids per plant, sample it again in a couple days to determine if the aphids stayed or left the field.

With typical planting dates and adapted maturity varieties in Minnesota, this migration or redistribution event usually occurs in the last few days of July or early August. As the winged aphids settle in new fields, populations can rapidly increase. Previously uninfested fields can quickly reach the economic threshold. The presence of winged aphids alone or with only small nymphs are signs that aphids are arriving rather than leaving.

If a field must be retreated within a season, consider switching to a different insecticide mode of action. Rotating modes of action will prevent the development of pest resistance to insecticides. 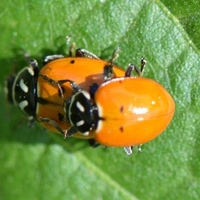 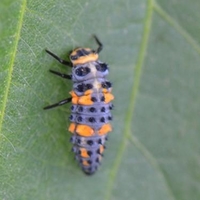 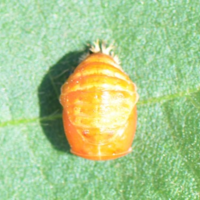 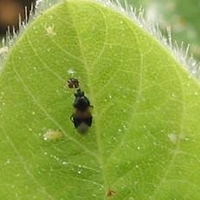 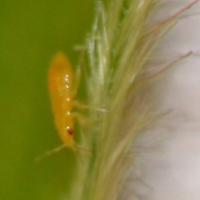 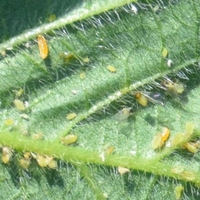 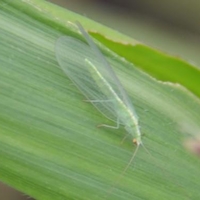 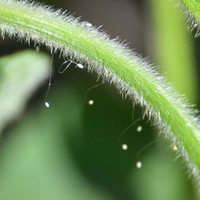 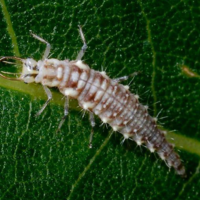 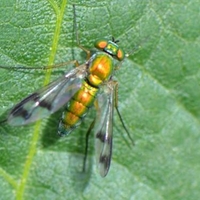 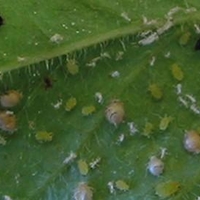 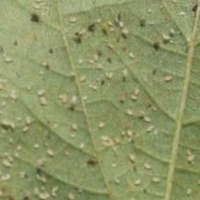 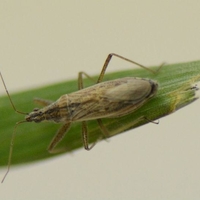 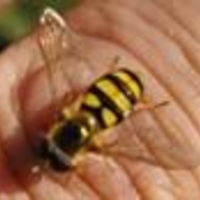 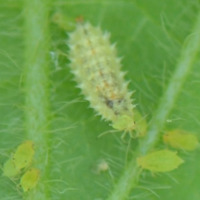 Unless otherwise specified, photos by Bruce Potter, University of Minnesota.