Here, you’ll find strategies for managing spider mite outbreaks, including how to scout for them, when to treat and which miticides may be effective.

Spider mite outbreaks are rare, but have occurred more frequently in recent years—including in 1988, 2007, 2009 and 2010. To make matters worse, you’ll need to make tough decisions if you’re trying to manage both spider mites and soybean aphids.

About spider mites and the damage they cause

Two-spotted spider mites are minute (less than 0.002 inch), greenish, yellowish to orange arachnids with two dark spots on their abdomen. Note they have eight legs, not six like insects. Spider mite adults are about half the size, or less, of the smallest soybean aphid nymph.

These mites attack a wide variety of plants, including several crops (soybeans, dry beans, alfalfa and corn), vegetables, ornamentals and trees. Mites overwinter as eggs and move to crops from permanent vegetation.

Hatching mites colonize the undersides of leaves. Look closely, and you might even see the webbing that earns them the name spider mites. They disperse by spinning a silk thread that's caught by the wind.

Spider mites have a straightforward life cycle, progressing through three stages between egg and adult (Figure 1). Depending on temperature, development takes five to 19 days. Hotter temperatures (more than 90 degrees Fahrenheit) accelerate reproduction, while cooler temperatures slow it down.

With females producing up to 100 eggs each (clear, round and shiny spheres on Figure 1), populations can explode. In fact, there can be as many as 70 times more mites in as little as six to 10 days.

Spider mite populations are held in balance by natural enemies, weather and host quality. Drought triggers spider mite outbreaks in soybean and corn by upsetting this balance in four ways.

Spider mites injure leaves by piercing cells and sucking out cell contents. This injury produces white or yellow spots or stippling that’s heaviest on the underside of leaves (Figure 3).

How to scout for and spray spider mites

Infestations are typically first observed near field edges or where soybeans are stressed. If you notice lower leaf loss or yellowed or browning spots at the field edge, it’s time for some detective work (Figure 4). 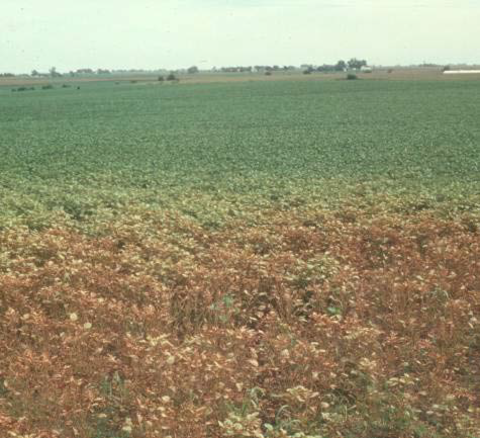 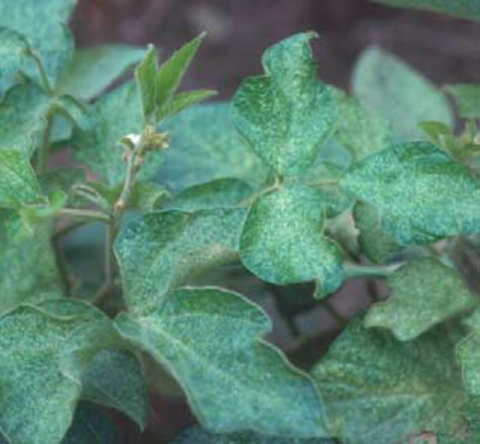 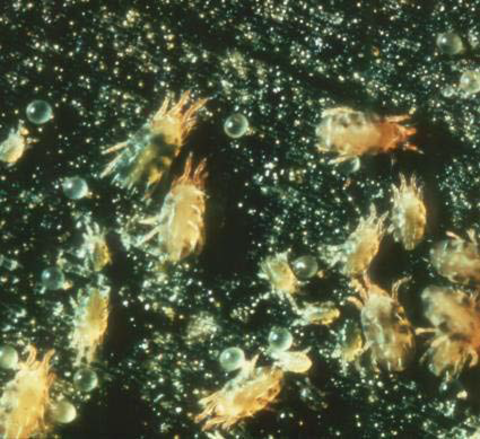 When scouting fields for spider mites, note field edge symptoms,  leaf loss and stippling on leaves and presence of mites on plants.

If you verify mite presence, it’s time to move further into the field. Move at least 100 feet into the field before making your first stop. Walk a “U” pattern checking at least two plants in each of 20 locations.

Check fields every four to five days when drought persists. Under these conditions, infestations can quickly develop.

When a soybean field reaches a three on the following scale, spray the middle and upper canopy leaves to protect them.

0: No spider mites or injury observed.

5: Lower leaf loss is common, with yellowing or browning moving up the plant into the middle canopy. Stippling and distortion of the upper leaves are common. Mites are present in high levels in the middle and lower canopy.

If leaves drop or plants are killed, pod fill stops in its tracks. Pods on mite-stressed plants are more likely to shatter, which compounds yield loss. Only a 10 to 15 percent reduction in effective leaf area will justify an insecticide/miticide application to avoid yield losses. Unfortunately it's not easy to estimate a 15 percent reduction in effective leaf area.

Damage isn’t reversible, so it's important to protect the middle and upper canopy leaves. At a rating of three, there’s heavy stippling on the lower leaves with some progressing into the middle canopy and very little in the upper canopy.

At this point, mites will be common in the lower canopy, present in the middle canopy and with scattered colonies in the upper canopy. Some lower leaf yellowing will be common with accelerated leaf loss in small areas. In cooler weather, these symptoms will be less pronounced.

While there are many insecticides labeled for soybean, a few have adequate mite activity (Table 1). In addition to dimethoate, bifenthrin or mixtures containing these ingredients, growers have access to two more miticides for use against two-spotted spider mites in soybean.

Some insecticides may aggravate the situation by causing populations to increase. Flaring—when sprayed populations rise above the untreated level— can occur because these insecticides remove predatory mites and insects, and may even stimulate more rapid reproduction.

Table 1 shows the insecticide group,  common and trade names of insecticides labeled for two-spotted spider mite (TSSM) control in soybean, the TSSM growth stage that's controlled and any insecticide resistance concerns. The information is summarized from miticide labels to help producers select products. Labels change, so read and follow label directions. The label is the ultimate authority for its application to two-spotted spider mites and may differ from the information provided in this table.

*Restricted use pesticide
Always read and follow label directions.
Products are mentioned for illustrative purposes only. Their inclusion does not mean endorsement and their absence does not imply disapproval.