Cecilia Riedman and Stephen Long guide their boat along the shore of Turtle Lake in Itasca County and point to a small island of rock and pine. “Recognize that?” Long asks visitors. “A Hamm’s beer commercial was filmed there in the 1960s.” The visitors can’t help but chant the jingle, “From the Land of Sky Blue Waters.”

Turtle Lake is iconic Minnesota, but things have changed since the 1960s.

“It used to be that our lake association was mostly concerned with planning the Fourth of July Festival and the fishing contest,” Riedman says. “Now we’re also thinking about how to engage the 230 people in our association to prevent aquatic invasive species (AIS) from invading our lake.”

Riedman and Long want to keep their lake healthy and free of zebra mussels and other invaders that crowd out native species, but they also care beyond their own waters. So they applied, together, to volunteer as AIS Detectors.

The program, which launched in 2017, is led by University of Minnesota Extension and the Minnesota Aquatic Invasive Species Research Center (MAISRC), in coordination with the Minnesota Department of Natural Resources (DNR). Reidman and Long are trained to identify and report suspicious findings, and to help boaters understand how to prevent the spread of unwanted plants, fish and invertebrates.

Long is retired from his career in air traffic control. Riedman, once a marine biologist, switched to a career in the corporate world for years before retiring and was looking for an opportunity to be a citizen scientist. “It’s also a chance to do something together that we both feel passionate about,” she says.

The duo’s skills, time and energy are much appreciated. “With over 13 million acres of surface water in Minnesota, officials can’t examine all of it,” says Megan Weber, Extension aquatic invasive species educator. “We need as many eyes on the water as possible, and that’s where AIS Detectors come in.” 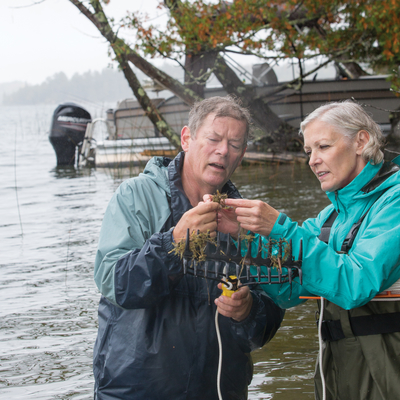 Reaching out with research

Bill Grantges, Itasca County AIS coordinator, most values Riedman and Long and other AIS Detectors for the educational outreach component of their volunteer service. Itasca County alone is almost as big as Delaware and Rhode Island put together.

“Between my ties to Extension and MAISRC, I can share cutting-edge research and give people hope,” he says. But with 1,100 lakes, and 240 resorts, lodges and campgrounds to reach with information, he’s found a lifeline in the volunteers.

It’s also helpful when the people delivering the message are in the same boat, proverbially speaking.

“People can tune out the message sometimes,” he says. “But when an AIS Detector comes, especially if they’re from the same chain of lakes, it’s like a family member is talking to you.”

The AIS Detectors program launched with a grant from the Environment and Natural Resources Trust Fund, administered by the Legislative-Citizen Committee on Minnesota Resources.

Could I become an AIS Detector?

Join the fight by completing 16 hours of online and in-person training. Once certified, AIS Detectors serve these four functions while they continue learning through advanced training opportunities: 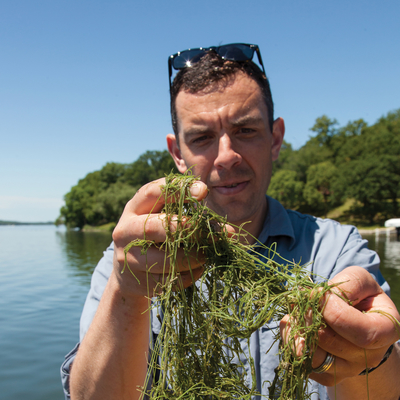 The launch of the AIS Detectors program has been timely for Dan Larkin, an assistant professor and Extension specialist who studies the ecology and management of aquatic invasive plants.

Even with hundreds of citizen scientists, it is hard to know where to deploy them in a state with more than 11,000 lakes. Ranjan Muthukrishnan, a postdoctoral associate working in Larkin’s lab, developed a risk model based on water chemistry and used it to prioritize deployments for “Starry Trek,” a statewide search for the invasive alga starry stonewort, which has been found in 11 Minnesota lakes since its discovery here in 2015. Lakes were chosen for searches based on Muthukrishnan’s predictions and local input.

This led to Grand Lake in Stearns County being one of nearly 200 lakes searched.

“Volunteers discovered a small infestation of starry stonewort there,” says Larkin. “It was found early, and the lake association and DNR responded quickly. DNR specialists hand-pulled it and we’re optimistic that continued monitoring and hand-pulling can control this population.”

Guardians of the Waterways features an AIS detector volunteer.