It was a cinnamon cake made with green tomatoes that started it all.

Salter and her friends—with the guidance of University of Minnesota Extension Master Gardener volunteers Del Hampton and Mary Cichon—were a couple of years into working the garden they had started in the Heritage Park neighborhood of north Minneapolis.

“Mary gave us the recipe,” says Salter. “I couldn’t believe there were tomatoes in it—you don’t know they’re there.” The students had been through years of nutrition and gardening classes with Extension. Alecia Leonard and Elana Dahlberg at the nonprofit Urban Strategies, a partner in the neighborhood, suggested they develop their business minds as well as their cooking skills and green thumbs.

“The first thing we thought of was the green tomato cake,” says Leensa Ahmed, also a high school junior and the bakery’s chief financial officer. “We made $1,500 selling them at a festival and used the money to help our friend who had been in a car accident.”

A youth-led business is born

The next year, more kids joined the effort. The Green Garden Bakery now uses commercial kitchen space, baking and selling a variety of veggie-filled treats at the Minneapolis Farmers Market, online and in some local markets. They’ve continued to give back, voting on community needs to support.

These young entrepreneurs appreciate Extension’s Hennepin County Master Gardeners for encouraging them in their food-based business. “We can email them. We can call them. I know they’ll respond,” says Salter. “Whether there’s a weed taking over the beds, or we need to know when to pick something or what else we can grow, Mary will teach me the concepts and Del will motivate me to do it well.” 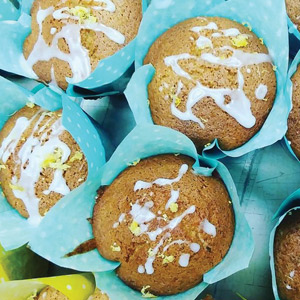 Heritage Park is a low-income neighborhood that has been defined as a food desert with food security a priority issue. Hampton, a retired financial worker and competitive dahlia grower, isn’t big on the “food desert” term, though. “Desert is a geographical term, but it’s not a geographical issue. It’s economic,” he says. “We overcome it in three ways: mindset, skill, will.”

When Salter and Ahmed and their friends move on, they will help younger kids take the reins. Two hundred youth are involved at some level, from the youngest just beginning to learn basic gardening skills from the Master Gardeners to the most highly invested young people on the bakery’s 13-member executive board.

“A storefront is in the works,” says Salter. “If we don’t make it by the time we go to college, the kids after us are going to take it far.”

Visit StoryCorps to listen to Master Gardeners and youth in conversation.

Listen to the recording