During the past two decades, young professionals in Minnesota have been migrating from urban areas to rural areas. They are attracted to the slower pace of life, relatively lower cost of living, and small schools that rural communities offer. In particular, the northwestern part of the state has attracted new residents because of its healthy agricultural and manufacturing regional economy.

This fact sheet examines a few ways that 76 northwestern Minnesota communities are striving to recruit new residents and offers some ideas for others to use. We called the 76 communities' city clerks, mayors, or economic development staff. Interviews determined if formal recruitment methods backed by the city were used, and if so, what types were employed. We also asked about informal recruitment methods.

There has been a renaissance in rural living over the past two decades in Minnesota. Attracted by a slow pace of life, small schools, and a relatively lower cost of living, many young professionals are migrating from urban areas to rural areas. The northwestern part of the state, in particular, has sustained a healthy agricultural and manufacturing regional economy, which may certainly be an additional attractor for Minnesotans of various ages.

So how are local governments in northwestern Minnesota capitalizing on the growing popularity of their region? What recruitment incentives do they offer to attract more residents? What limitations do county and municipal governments face in this effort? This fact sheet examines a few ways that 76 northwestern Minnesota communities are striving to recruit new residents and offers some ideas for others to use. 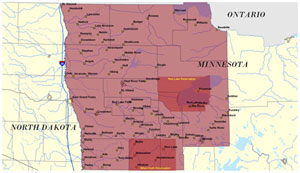 Located in 11 counties, the 76 communities we studied are in wooded areas and the prairie country of the Red River Valley. With the exception of one city with about 13,000 residents, most towns have a population of fewer than 10,000 residents and three-quarters have fewer than 740 people. Four of 10 communities surveyed had a volunteer economic development committee or a paid economic developer of some kind.

The predominant formal strategy used by city governments that did recruit focused on land or housing incentives for recruitment. Most cities used one or more of the following incentives: free lots, suspended taxes, free or discounted sewer/water hookups, or renovation loans on existing homes. Other formal methods cities used to recruit new residents included:

Our research showed that the larger the community, the more likely city-backed, formal recruiting existed—as indicated in this chart: 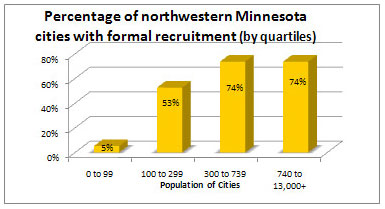 When community contacts were asked if they were aware of any informal recruiting, 25 percent said they knew of individuals or civic groups that had attempted to interest former residents or newcomers in moving to their city. Some 17 percent of those surveyed said they were aware of both formal and informal recruiting methods, while just over 33 percent said they knew of no recruitment efforts of any kind in their area. However, the majority of interviewees said they had heard some discussion about recruiting new residents.

Northwest Regional Development Commission Executive Director Leon Heath noted that it can now cost cities from $20,000 to $30,000 per housing lot to extend required sanitation services and access roads. This means that cities eager to attract new residents must carefully craft their land-incentive agreements in order to maximize existing municipal utility and sewer/water use for each lot.

Of those interviewed, only one city indicated it was intentionally not recruiting new residents. Contacts in two cities said they do not need to formally recruit newcomers because they have a popular local culture and are near major regional employers who draw new residents without effort. Interviewees at Indian reservations in northwestern Minnesota said they are not formally recruiting new residents, noting that tribal members who left years ago for the Twin Cities are moving back in with relatives and friends while they wait for housing to open up.

With some exceptions then, the overwhelming majority of cities surveyed expressed a desire for attracting new residents. A clear pattern showed that the larger the city in northwestern Minnesota, the more likely the community would dedicate both formal and informal resources to recruitment. The biggest impediments to expansion were lack of available lots, housing, and sewer/water services. On the other hand, it was often the smallest cities with almost non-existent municipal services that boasted "low taxes" when asked what made their communities attractive. These small communities might benefit greatly from adding new residents to their tax rolls, yet they face the interim dilemma of lacking the tax revenue to pay for new services that attract newcomers.

Regardless of size, most communities do not publicize the availability of recruitment incentives outside their immediate environs, making it difficult for those living farther away to learn about them. For example, a billboard advertising free lots only reaches those who travel through the region. Some cities have advertised throughout the region, but only one community has used mass media or targeted advertising to urban areas other than nearby Fargo-Moorhead and Grand Forks.

In light of the information from this research, city leaders should ask:

Before committing to a campaign to recruit new residents, city leaders also should consider land and zoning issues. Ask the following questions:

Finally, think about what has attracted other residents to your community in the past, and what you can improve easily. Then inquire further and ask current residents in your town what weaknesses can be reduced and what positive traits should be highlighted to those who might be looking for your city's values and lifestyle. Think of those who have not found you yet!

Rural migration: The brain gain of the newcomers