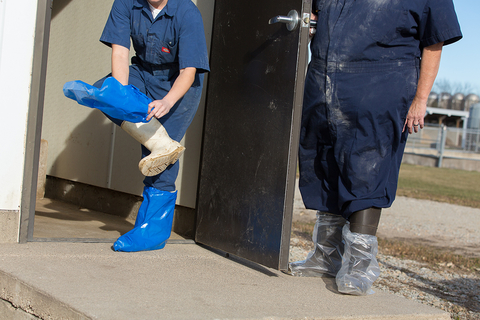 Highly Pathogenic Avian Influenza (HPAI) in Minnesota and the Midwest can cause great loss to commercial poultry farms. HPAI represents a change in what avian producers have come to expect, given spring introductions of avian influenza are usually rare. Biosecurity is key to preventing or reducing the extent of possible virus introduction.

With introductions into single barns on multi-barn sites, barn biosecurity is key. You need a line of separation around each barn in addition to the separation area for the farm unit. Lines of separation define clean areas from dirty areas.

None of these excuses are acceptable reasons for breaking biosecurity protocols.

A survey of poultry farms by Racicot and coworkers, 2011, 2012 using video and audits to track compliance revealed:

For service providers and nonfarm employees

Every person entering and exiting a farm site must understand and follow the biosecurity protocols the farm has in place. Biosecurity is key to keeping animals healthy and farms productive.

Contact the farm owner or manager to help you through their biosecure protocol. Protocols may differ by farm. Some farms may require days of downtime between visits to other farms.

Ensure that you clean and disinfect all of your tools and equipment after every use. Keeping disinfectant sprays and disposable gloves and boot covers in your service vehicle may be helpful.

Be aware of the common ways disease might be introduced to a farm. People may carry disease onto a farm by:

Vehicles may also introduce disease to farms including:

Biosecurity often starts at the outer boundary of a farm site, known as a perimeter buffer area. This boundary separates the barns and animal areas from other areas on the farm site. Make sure you understand where this boundary is, what items are allowed to cross the boundary, and the protocol for you, your equipment, and service vehicle.

Farms may require additional steps, but at a minimum when exiting a barn: