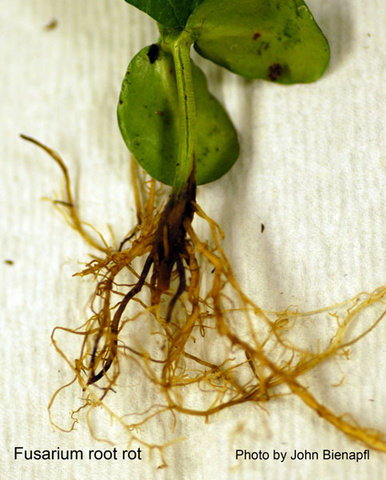 Fusarium root rot is an important disease that occurs in many soybean production areas in the U.S. However, this disease may be difficult to diagnose because the causal agent(s) may either act as primary pathogens or they may colonize root systems along with other soilborne fungi. Fusarium species are often isolated from soybean roots that are also infected by other pathogens (e.g. Pythium, Phytophthora, and Rhizoctonia). Fusarium species are common and can survive for long periods in soil.

The lower taproot and lateral roots of infected soybean plants may appear brown to black in color and show cortical decay or vascular discoloration. Lateral roots may also die and decompose, and secondary roots may develop above them on the upper taproot. If root rot becomes severe, infected soybeans may develop foliar symptoms including stunting, marginal or whole leaf chlorosis (yellowing), wilting, and defoliation. 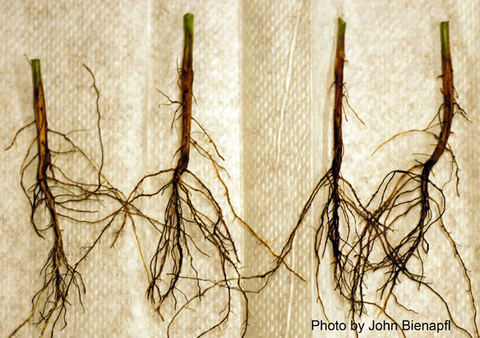 Cool temperatures and wet soils, particularly early in the growing season, often favor infection by Fusarium species. However, later in the growing season, as soil moisture becomes more limiting, soybeans may become stressed and may also be prone to infection by Fusarium. Factors such as the soybean cyst nematode, soil compaction, crop rotation history, soil pH, and soil type may be important for the development of Fusarium root rot. Flooding has been shown to reduce plant stand and increase levels of root rot. 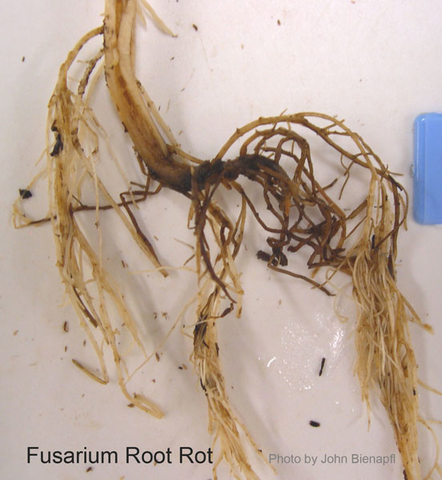 Planting in well-drained soils and minimizing soil compaction may help to make conditions less favorable for infection by Fusarium species. Minimizing stress and injury to plants caused by soybean cyst nematode, herbicides, iron deficiency, and other plant pathogens may also help to reduce Fusarium root rot. Fungicidal seed treatments are often recommended when planting into fields with a history of fungal root rot problems and may aid in controlling Fusarium root rot.