Brown stem rot (BSR) is widespread across the northern tier of the U.S, soybean producing states. The BSR pathogen infects the inner stem, and symptoms may or may not be visible without splitting stems of infected plants. BSR can cause significant yield reductions, and plants without visible symptoms on leaves may also suffer yield losses from five to 15 percent BSR can cause premature senescence of infected plants. BSR can be confused with sudden death syndrome (SDS) based on the similar leaf symptoms for both diseases.

Symptoms of BSR usually don't appear until mid-August or later. BSR causes browning of the pith in the center of the stem, especially near the lower nodes. The pith is typically brown in stems that are split, whereas the pith is white in healthy stems. Depending on summer environment, soybean cultivar, and type of the pathogen, leaves may also develop brown and yellow discoloration between the veins. The leaf symptoms can be confused with SDS symptoms, but these two diseases can be differentiated by the pith color in the lower stem. 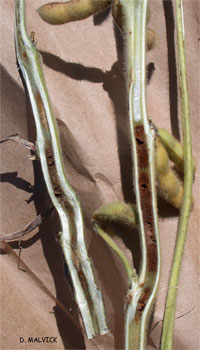 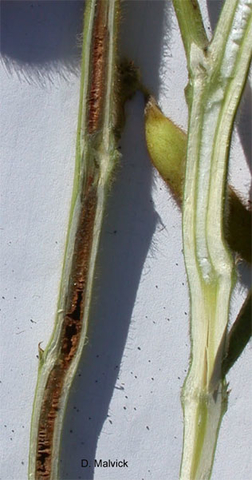 The BSR fungus infects through the roots and stem early in the growing season, but symptoms typically do not appear until August. BSR symptoms are favored by cool, wet weather during pod-fill followed by hot, dry weather in mid-late August. Soybean cyst nematode may enhance BSR.

Phialophora gregata, also named Cadophora gregata is a soilborne fungus. This pathogen overwinters in soybean stem residue and soil. Two different types of this pathogen (A and B) cause different symptoms. Type A typically causes pith browning and leaf symptoms, but type B usually causes only pith browning. Type B is common across the northern states in the Midwestern U.S.

The two most important tactics for management of BSR are the use of resistant soybean varieties and rotation to non-host crops such as corn. Because SCN may interact with BSR, resistance to SCN may also help to reduce BSR. 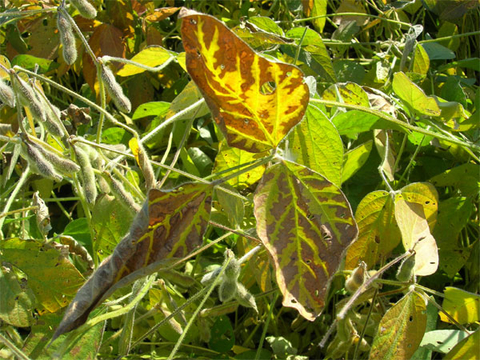 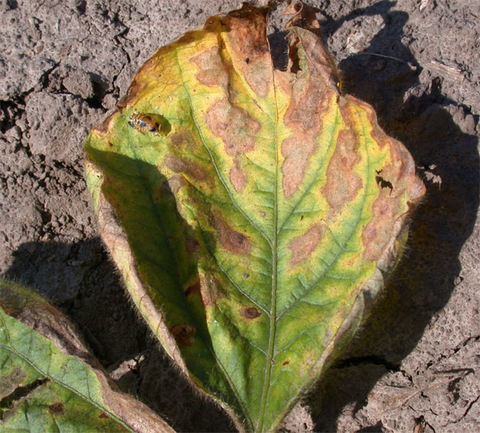