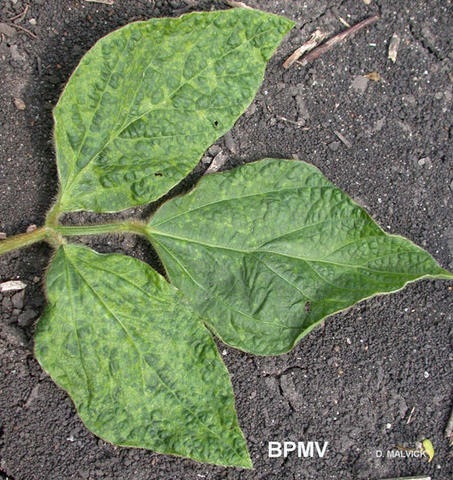 Bean pod mottle virus (BPMV) is widespread viral disease in the U.S soybean growing areas that is transmitted by leaf-feeding beetles. BPVM can affect seed quality and cause yield loss, especially when plants are infected as seedlings. In addition, plants infected with bean pod mottle virus may be predisposed to seed infection by Phomopsis fungi that also reduce seed quality.

Bean pod mottle virus causes green to yellow mottling of young leaves. In severe infections, leaves may become distorted. Seeds from infected plants may be mottled or discolored, but other factors can also cause mottled seed. Symptoms may not be apparent at high temperatures or after pod set. Pod formation may be reduced when infected plants are under moisture stress. BPMV can interact with the soybean mosaic virus to create severe symptoms in plants infected by both viruses. BPMV may also be related to the development of green stem syndrome, in which plants retain green stems and leaves after pods and most nearby plants have matured. 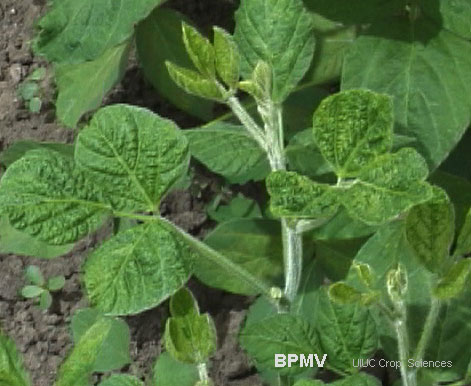 Plants can be infected at any time during the growing season, but infection generally seems to occur early in the season. Cool temperatures favor development of BPMV symptoms. Infection is also favored by high populations of bean leaf or other beetles that transmit the virus. The rate of infection is reduced following severe winters that result in poor survival of beetles.

The causal agent of BPMV is a virus. The disease is transmitted by leaf-feeding beetles, such as the bean leaf beetle and the western corn rootworm adults. The virus can also be transmitted sap and by infected seed, but seed transmission rates are very low and have been estimated to be 0.1 percent. The host range of BPMV includes common bean and some clovers. Overwintering beetles and some perennial weeds near the edges of fields may be sources of the virus in the spring and early summer. 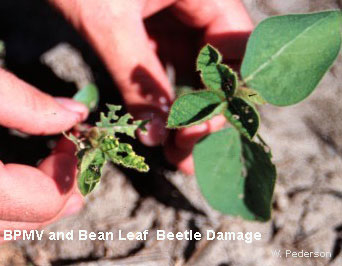 At this point, effective management tactics are not available. Resistant varieties are in development and not available commercially. The value of insecticides for controlling transmission via the bean leaf beetle is uncertain.