Japanese beetles are an invasive species.

The Minnesota Department of Agriculture monitors this invasive species. Please report Japanese beetles found outside the seven county Twin Cities metropolitan and southeast areas of Minnesota to Arrest the Pest.

Japanese beetles (Popillia japonica) were first found in the United States in 1916, after being accidentally introduced into New Jersey. Until that time, this insect was restricted to Japan where it is not a major pest. This pest is considered to be an invasive species. It is now found throughout the eastern U.S., except for Florida, and continues to move westward.

Japanese beetles were first discovered in Minnesota in 1968. At first, only a few beetles were found. By 2001, they occurred in much higher numbers. In one year the Minnesota Department of Agriculture (MDA) trapped more than one million beetles. Since then, Japanese beetle numbers have fluctuated from year to year.

Japanese beetles are most commonly found in the Twin Cities metropolitan area as well as southeast Minnesota. The MDA maintains an updated distribution map of Japanese beetles.

How to identify Japanese beetles

Japanese beetles are a serious pest of flowers, trees and shrubs, fruits and vegetables, field crops and turf. Adults feed on more than 300 plant species, whereas the grubs feed mainly on the roots of grasses.

They skeletonize leaves by feeding on tissue between the major veins giving them a lace-like appearance. Damaged leaves turn brown and may fall off.

Grubs chew grass roots and reduce the ability of grass to take up enough water and nutrients to remain healthy. When grub feeding is severe, dead patches of grass develop.

These dead patches can be rolled back like a carpet due to the lack of roots. If grubs are not found, examine still living turf at the edges of damaged areas for their presence.

Moles, skunks, crows and other insect-feeding animals may dig up grubs, further damaging the turf. 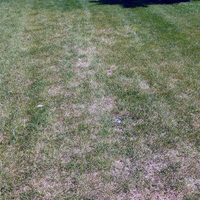 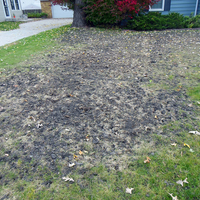 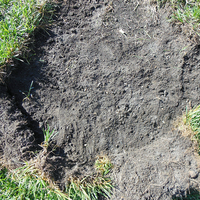 Look for beetles in your yard and garden starting in late June and early July. Start management when they first appear. Damaged leaves attract more beetles so minimizing beetles on plants should mean fewer beetles will be attracted to them.

Japanese beetles feed for six to eight weeks so it is important to continue management until their numbers decrease. Once they are present in large numbers, managing them becomes more difficult.

Most feeding is finished by mid to late August.

Physically removing beetles can be a practical and effective management practice for smaller landscapes or a few plants, especially when only small numbers of Japanese beetles are present. Handpick or knock the beetles into a bucket of soapy water to kill them.

Check your plants daily and remove any beetles that you find to minimize feeding damage. Remember beetle-damaged leaves emit air-borne chemicals that attract more beetles. By physically removing them, you’ll reduce the number of new beetles attracted to your plants.

The best time to remove Japanese beetles is in the evening or in the morning when beetles on the plants are still cool and sluggish. However, anytime that it can be done is still useful.

In some cases, it is possible to protect plants with fine netting to prevent beetle damage. However, do not cover plants in bloom that require pollination (i.e. fruits) as this will prevent pollinators from reaching them. Instead, handpick beetles until the plant is done blooming and starting to set fruit, then cover it.

Don't use Japanese beetle traps. Hanging a trap in a home garden is not an effective way to protect plants. And they may attract more insects to your yard.

The traps attract beetles using synthetic female sex pheromone and a blend of chemicals with a strong floral odor. They were developed by researchers to monitor for the presence of Japanese beetles so that management strategies could be implemented.

While these traps can collect an impressive number of beetles, research at the University of Kentucky has demonstrated that more beetles fly toward the traps than are caught. This usually results in more damage to nearby gardens and landscape plants than would have happened if no traps were present.

Although Japanese beetles feed on many different kinds of plants, there are some that they seldom damage. When choosing new plants for your landscape, consider using a less preferred plant.

Is the four o’clock flower toxic to Japanese beetles?

The four o’clock, also called marvel-of-Peru (Mirabilis jalapa), has been reported by some gardening sites and blogs to not only halt the beetle’s garden invasion but kill them in the process. But these sources offer no evidence of its effectiveness. Four o’clocks are grown as annuals in Minnesota.

This plant does affect humans. The sap from four o’clocks is a mild irritant, causing itching on the skin. Also, eating the plant may cause stomach upset or other intestinal issues as well.

If physical removal and barriers are not practical or you wish to supplement non-chemical management, you may choose to use an insecticide to protect valued plants. Remember that insecticides can pose significant risks to beneficial insects, including pollinators, as well as birds, fish and mammals.

Use low risk insecticides when they are effective for protecting your plants.

Products containing pyrethrins (e.g. Pyola®) are somewhat effective contact insecticides provided they are sprayed directly on the insect. Repeat applications are necessary. Avoid spraying bees and beneficial insects as these products are toxic to these non-pests as well.

Neem oil is effective for several days but repeat applications are necessary. Neem oil helps deter Japanese beetles but is less effective when large numbers are present. This product is low risk to bees and other beneficial insects.

Caution: pyrethroids, carbaryl, and acephate are toxic to bees and other pollinators.

A systemic insecticide is absorbed by the plant and moved through its tissues and is applied as a soil drench or injection, a trunk spray or a trunk injection. This can be useful to avoid pesticide drift, especially when treating large trees.

Trunk injections should be done by a certified tree care professional.

Imidacloprid and dinotefuran, both neonicotinoids, are available to residents. They are applied to the soil and only one application is needed per year. Do not apply to soil within 4-5 feet of pollinator attractive plants.

Caution: Imidacloprid and dinotefuran are very toxic to pollinators. Either avoid applying these insecticides to bee attractive plants or wait until the plants have finished blooming before treating them.

Controlling Japanese beetle grubs is unlikely to reduce the number of adults on landscape plants. Beetles emerging from non-treated grass areas can fly a considerable distance to preferred adult food plants. Only treat white grubs to protect lawns from damage.

If your lawn has a recent history of grub damage, you may wish to treat with a preventive insecticide in June or early July (see below) to help ensure that the lawn is not damaged again.

If you adopt a "wait and see" approach, and discover in summer that your lawn has become infested, a curative insecticide can be applied in late July to mid-September when the grubs are still relatively small (1/2 inch or less). Yellowing or browning grass in August is an early symptom of white grub damage. There are other possible causes for discolored turf so check under the grass to make sure it is due to white grubs.

Once white grubs are nearly full-sized (about 1 inch long), and the turf has begun dying in patches that pull easily from the soil, you can still apply a "rescue" treatment with a fast-acting curative insecticide in September, but expect only partial control. Once the grubs have stopped feeding and started to move downward in late fall, insecticides are not effective against them.

Do not treat in spring because the large grubs are hard to kill, they feed for a relatively brief time and rarely cause damage in the spring. Treating in spring is no guarantee that the lawn will not be re-infested again in mid-summer.

Parasitic nematodes, such as Heterorhabditis bacteriophora, are available. They generally do not affect beneficial insects. They need to be applied after the eggs have hatched and the grubs are present. If using nematodes, apply them during cool, overcast days or in the evening and water before and after application as they are susceptible to drying out. While they can be effective, results have been inconsistent.

Milky spore bacteria, Paenibacillus popilliae (formerly known as Bacillus popilliae) infect only Japanese beetle grubs and have no effect on beneficial organisms. Although these bacteria occur naturally in the soil and may infect a small percentage of the grub population, applying commercial milky spore products has not been shown to provide any benefit in modern university research trials.

Preventive insecticides are applied as insurance against grub damage. Preventive treatment may be warranted if a lawn has a recent history of grub infestation, or if the adult beetle flight is particularly high in a given summer.

The best timing is during the month or so before the adult beetles first emerge and start laying eggs (mid-June to mid-July in Minnesota). Chlorantraniliprole (such as Scott's Grub-Ex®) is an effective, preventative insecticide that is also low risk for bees.

Products containing imidacloprid or clothianidin are also effective if applied preventively, but they can pose a hazard to bees foraging on flowering weeds or nesting in treated lawns.

To minimize their hazard to pollinators

Homeowner products for preventive grub control usually have the words "season-long" grub control on the packaging.

Curative means treating white grubs when they are feeding and damage is noticed. If turf damage has been sporadic the last few years, it may be worth waiting to see if they are a problem. Watch closely for symptoms of turf damage.

Effective curative insecticide are trichlorfon, clothianidin, and carbaryl. All three are toxic to bees. Clothianidin, in particular, is systemic; i.e., it can be taken up by the roots and move into the nectar and pollen of flowering lawn weeds.

To minimize the hazard of curative grub insecticides to pollinators, mow any flowering weeds just before or right after the pesticide application. Avoid areas being used by ground-nesting bees. Homeowner products for curative grub control usually have the words "24-hour" grub control on the packaging.

Acknowledgement: Special thanks to Dan Potter, University of Kentucky, for his review and comments on this publication.