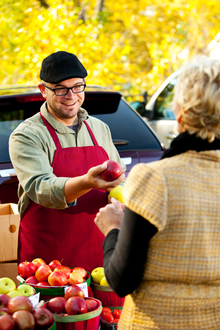 “Green” and sustainable building construction, social network game development, solar panel manufacturing, Pilates and yoga studios–these are a few of the fastest growing industries across the United States in the past decade.

Local food growers are working to have their day in the sun, too. And rural leaders are anxious to see how local food production might diversify and strengthen their economy–adding local producers to traditional agriculture, manufacturing, education and health care as economic drivers in Greater Minnesota.

According to the U.S. Department of Agriculture, local food sales totaled nearly $5 billion in 2012. That includes sales through direct-to-consumer channels, such as farmers’ markets, community-supported agriculture (CSA) programs, and roadside stands, as well as through indirect channels, such as restaurants, schools, and other institutional buyers.

That $5 billion figure is a small part of the total agriculture market, but it is meaningful to rural economies that want to keep dollars local and attract new residents.

“Growers are rooted in the community,” says Ryan Pesch, an educator with the Extension Center for Community Vitality (CV), with pun intended. “They live there, they shop there, they sell their products there. And that’s important to economic and community developers.”

Small farmers are every bit the business people as store owners. And like all players in emerging industries, understanding potential markets is critical to growth.

Another example of Extension's current efforts with local food producers is the Farm-to-School program. In collaboration with various partners, Extension educates schools and farmers about opportunities to bring local foods to school menus.

According to a March 2011 survey,* the number of Minnesota school districts engaged in Farm-to-School rose from 10 in 2005 to 123 in 2010. When Pesch and other University researchers looked at the economic impact of Farm to School in 2010, they discovered that incorporating local foods into school menus can contribute as much as $430,000 to a regional economy.

Two years later, Pesch was enlisted by small farmers in four counties in West Central Minnesota to explore the market potential of healthcare institutions, such as hospitals, nursing homes, and assisted living facilities. Were these institutions interested in buying local foods? Would they accept fruits and vegetables in whole, unprocessed form?

The study provides a prime example of how independently owned businesses can use research to expand markets.

So what did Pesch learn? Overall, he found substantial interest among survey respondents in buying fresh, local produce, and less concern than he expected about the logistics of processing. Specifically:

Pesch estimates that growers could double sales of fresh produce to healthcare institutions if they use technologies to extend the season. His analysis found that the four-county, healthcare market potential for fresh produce ranges from $93,245 for a standard summer season to $207,115 if seasons are extended.

In addition, Pesch recommends that growers focus on higher demand crops, including tomatoes, potatoes, onions, cucumbers, apples, melons, strawberries, carrots, and lettuce. Again, most of these crops are acceptable to the survey respondents in whole form.

These recommendations are a good starting point for growers interested in pursuing healthcare customers in the four-county area. “We analyze the big picture,” Pesch says. “The next step for growers might be their nearest Small Business Development Center, where they can get help with business planning. Where we leave off, business planning kicks in.”

“We’re uncovering some barriers to small growers following through, so the story’s not finished yet,” Pesch says. “But we can help with that. For example, small farms might join forces to navigate regulations to distribute the quantities necessary to meet demand. We just need to learn more.”