A quick guide to spinach and Swiss chard 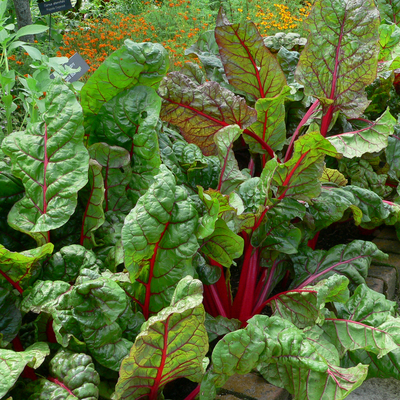 Swiss chard and spinach are leafy greens in the amaranth family, grown in many Minnesota gardens.

You can eat spinach (Spinacia oleracea) leaves raw or cooked. You can also cook and eat the “crown” of the plant, the area where all the leaves emerge at the soil surface.

Chard (Beta vulgaris) is the same species as beet, and you can use its leaves just like beet greens. While beets form a large taproot and develop a modest crop of leaves, chard grows a large crop of giant leaves and a thin, branched taproot. You can use chard leaves raw in salads, as well as cook them. The upright ruffled leaves with thick leaf stalks are attractive in the garden, with colors ranging from green and white to pink, red, orange and yellow.

While spinach is always available in grocery stores and on restaurant menus, chard is a less common vegetable. In the garden, chard is easy to grow, yielding tasty leaves from spring through fall, while spinach can be very frustrating to gardeners.

An important difference between the two plants is that spinach is day length sensitive, while chard is not. Spinach plants respond to increasing day length by “bolting:” sending up a flowering stalk and setting seed. In hot weather, plants respond more quickly to the day length signal. Drought can also accelerate bolting.

During May, the days are much longer than the nights. If the weather turns hot, or the planting gets dry, a spinach planting will stop leaf production and grow a flowering stem. In June, the plants tend to bolt even in cool weather.

Growers breed and select spinach varieties for resistance to bolting, but Minnesota’s northern latitude means that our day length increases quickly through the spring, to the very long days of mid-June. Our long days will even challenge varieties that are slow to bolt.

Many gardeners develop a liking for Swiss chard and learn to cook with it simply because it is a reliable crop. Chard is a biennial. It will not flower until the plant has lived through a winter, so there is no danger of it bolting in summer heat.

Chard does best in cooler weather. In the summer, its growth will slow, but as long as the soil does not dry out, it will still grow leaves. When cool weather returns in September, the plants quickly develop many leaves.

A number of leafy greens can be summer substitutes for spinach: heat-loving plants that grow tender, thick leaves. These plants can fill in the gap between spinach crops, and provide harvests when chard growth has slowed due to summer heat. Follow seed packet instructions for planting.

To direct seed spinach for a summer crop, sow seeds as soon as the soil is workable in the spring. For a continuous spring supply, plant spinach seeds every one to two weeks, until outdoor temperatures reach 80°F. For a fall crop, sow seed two months before the average first frost date. Combine a modest harvest of spinach with other early crops such as peas, lettuce and chives for a fresh-from-the-garden meal.

Spinach planted in August for a fall crop will grow under shortening days, and will not bolt. In the cooler northeastern part of Minnesota, from Duluth north, spinach planted in early August will likely flourish. In other parts of the state, it is best to wait until mid-August or later to sow the fall crop of spinach, to avoid summer heat.

Start chard somewhat later, in early to mid-May, as cold temperatures can lead to bolting. In this case, the plant bolts because it perceives a “winter” that signals it to flower. There is no need to make multiple chard plantings, as the plants will not bolt due to heat or day length.

Room temperature should be good for germination unless the house is particularly cool because of air conditioning. In this case, use a heating mat for faster germination.

Frequent, shallow cultivation with a hoe or other tool will kill weeds before they become a problem. Be careful not to damage the plants when cultivating.

Mulching with herbicide-free grass clippings, weed-free straw or other organic material to a depth of three to four inches can help prevent weed growth, decreasing the need for frequent cultivation.

In spring, harvest single leaves as soon as they reach a usable size by pulling them from the plants. Spinach and Swiss chard can grow new leaves, especially if you harvest individual leaves at the "baby" stage, so multiple harvests are possible.

If you notice a spinach plant bolting, the rest will soon follow, so harvest all of them.

You can pick the fall crop leaf by leaf, or you can harvest the whole plant by cutting it off at or just above the soil surface. This later crop of spinach is likely to grow much larger leaves and crowns than a spring crop. As cold weather sets in, a floating row cover can protect the plants from freezing, giving them a chance to grow

Some gardeners harvest entire heads of chard at once rather than picking individual leaves.

Both spinach and chard will only last for a few days in the refrigerator. Harvesting when plants are cool, rather than in the heat of the day, running leaves under cold water and immediately refrigerating them, will make it possible for spinach to last a week. Chard may last slightly longer. It is best to pick these vegetables as you need them.

For a large end-of-season harvest, freezing is the best way to preserve leafy greens.

Many things can affect spinach and Swiss chard. Changes in physical appearance and plant health can be caused by the environment, plant diseases, insects and wildlife. In order to address what you’re seeing, it is important to make a correct diagnosis.

You can find additional help identifying common pest problems by using the online diagnostic tools or by sending a sample to the UMN Plant Disease Diagnostic Clinic. You can use Ask a Master Gardener to share pictures and get input.

Cercospora leaf spot is sometimes present on Swiss chard in Minnesota. This type of leaf spot may stunt plant growth and creates reddish-purple spots on the leaves.

Spinach plants can start to flower after multiple days of high temperatures (greater than 75° F).