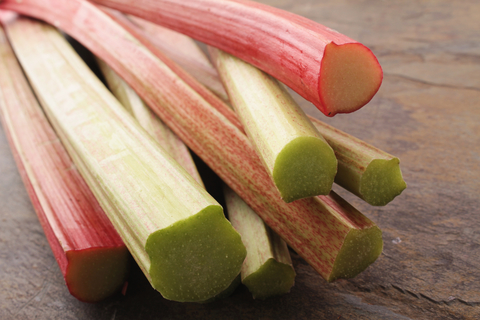 Rhubarb (Rheum rhabarbarum) is a perennial vegetable hardy enough for Minnesota gardens. It is in the buckwheat family, has a sour flavor and is among the first crops ready for harvest in spring.

Rhubarb is also a "pie-plant," because you can cook, sweeten and use the chopped stalks as a pie filling, usually with strawberries.

You can also incorporate it into breads and cakes, sweet and use it as a sauce, or cook with sugar, strain and drink it as a refreshing juice.

Few people can eat much rhubarb as a raw vegetable. While juicy and crisp, it is very sour.

Gardeners often acquire rhubarb plants from another gardener who is dividing a large plant. Although there is a possibility of receiving a plant infected with a virus, chances are good that the plant is healthy and vigorous, since it is large enough to need dividing.

You can also purchase plants at garden centers and from mail-order catalogs. Nursery-grown plants will be virus-free.

Catalogs also sell rhubarb seed. The reddest varieties are not available as seed, only as plants.

How to keep your rhubarb plants healthy and productive

Rhubarb plants are very large. A single plant usually provides enough for any family. Give each plant a three-foot-by-three-foot area in the garden.

For most gardeners, it is most convenient to position rhubarb at the edge of the garden. It should be in a spot that receives all-day sun. Rhubarb is hardy in USDA Zone 4, and worth trying in Zone 3.

Proper watering will help rhubarb growth. Soak the soil thoroughly when watering, to a depth of at least one inch each week during the growing season.

The rhubarb plant will produce the next year's buds at the outer edges of its crown. With each passing year, the plant will become slightly wider. The center may not produce any new stalks. Like many perennial plants, rhubarb can benefit from division every few years.

As new growth is starting very early in the season, use a clean, sharp shovel to cut the plant in half or in thirds. Move the divisions to newly prepared planting sites, or give them away. You can also dig up the entire plant and divide it using a sharp knife.

Because rhubarb takes so many nutrients from the soil, move the plant to a new site every so often. Rotate another crop into the former rhubarb patch.