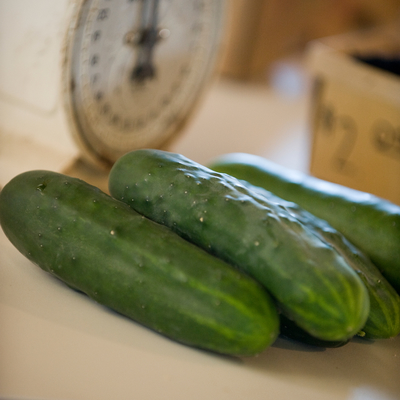 Cucumbers (Cucumis sativus) are common garden vegetables in all regions of Minnesota. You can eat them pickled, or raw in salads.

Like other vine crops such as squash, melons and pumpkins, cucumbers grow best in warm weather. Some varieties form long vines that may need a trellis. Others are bush-types that fit better in a small garden.

Cucumber plants have separate male and female flowers on the same plant. Male flowers usually appear first, each attached to the plant by a slender pedicel, or stem. Female flowers grow close to the main vine. Between the flower and the vine is a small round ovary, the unfertilized fruit.

Other varieties have only female flowers, each of which can produce a fruit. These varieties can have high yields. You must grow the all-female varieties with another cucumber variety having traditional flowering habit to provide pollen.

The best way to start cucumbers is direct seeding. Use a soil thermometer and sow seeds after the last frost date, once the soil is at least 70° F at the one-inch depth. In most of Minnesota, this will be sometime in late May.

Sow seeds about one-half inch deep. For vining types that will spread out in the garden, sow seeds two inches apart. Allow about two or three feet of space on either side of the row for the vines to spread.

A "hill" of three or four seeds sown close together is another way to plant cucumbers in the garden. Allow five to six feet between hills. You can plant bush types, with very short vines, in closely spaced rows or hills, with only two to three feet between rows or hills.

After emergence, thin seedlings to stand 8 to 12 inches apart. You may also train the vines to climb a three- to four-foot trellis, allowing you to space garden rows more closely, and producing perfectly straight fruit.

After the seedlings have emerged, position the row covers over the plants, securing the edges with soil or staples. Spun row covers raise air temperature around the plants and protect them from cold nights. Row covers prevent both pests and beneficial insects needed for pollination from the plants, so you must remove them from the plants once flowering begins, unless the variety is seedless.

How to keep your cucumber plants healthy and productive

Poor fruit set could e due to not enough pollination. Cold, rain or cloudy weather can reduce pollination.

Bitterness in cucumbers is sometimes a problem. Typically, fruits are bitterer closer to the skin, and bitterest at the blossom end. Concentrations of the bitter compound, cucurbitacin, vary among varieties. There are some non-bitter varieties available to home gardeners. Bitter varieties are more attractive to cucumber beetles, so planting non-bitter varieties has the benefit of less pests.

The first blossoms often drop from the vines. This is not a problem, since the first flowers to appear on the vines are male. The female flowers, which open later, have a swelling at the base that forms the fruit, also known as the ovary. After bees pollinate these female flowers, the fruit develops. 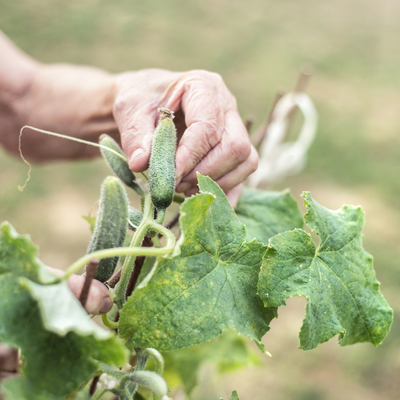 Many things can affect cucumber plants. Changes in physical appearance and plant health can be caused by the environment, plant diseases, insects and wildlife. In order to address what you’re seeing, it is important to make a correct diagnosis.

You can find additional help identifying common pest problems by using the online diagnostic tools What insect is this? and What's wrong with my plant? or by sending a sample to the UMN Plant Disease Diagnostic Clinic. You can use Ask a Master Gardener to share pictures and get input.

Many of the same cultural practices help prevent a wide variety of cucumber diseases.