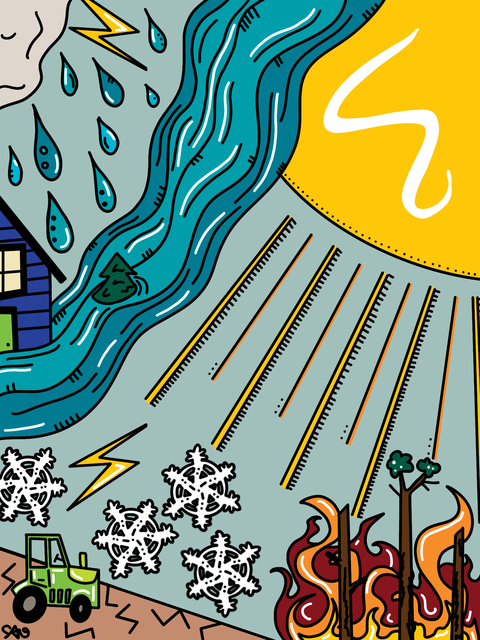 In 2012, during Kathleen Doran-Norton’s tenure on the Bridgewater Township Board in Rice County, a rainstorm took place so unrelenting that it was called a “once in 200 years” storm.

But it happened again the next year. And the year after that. Three years, three storms that would have been rarities in earlier decades.

“These storms washed out the township’s gravel roads. Farmhouses were like moats. It was an intense experience, and it was personal,” Doran-Norton says. “Federal agencies fixed the damage but did nothing to adapt things so that roads could handle it better next time.”

There will be a next time; the occurrence of extreme weather is accelerating as the climate changes. It all made taking part in University of Minnesota Extension’s first community-based climate communicators program important for Doran-Norton.

A gap between knowing and discussing

The program was developed by the University of Minnesota Climate Adaptation Partnership, led by Heidi Roop, Extension climate scientist, with support from the U of M Sustainable Development Goals Initiative. Twenty participants came together starting in the fall of 2021 to build their knowledge of local climate impacts and, critically, the skills and confidence to discuss climate change in their communities.

The science supporting climate change is beyond question. Polling regularly shows over 70% of Minnesotans are concerned about climate change and agree it is occurring. But less than half think climate change will harm them personally and even fewer ever discuss it. “Moving from science to action requires discussing the issue and deploying solutions to prevent further warming and prepare communities for the changes we’ve already set in motion,” says Roop.

“There’s a gap between the knowledge that climate change is real and talking about it,” says Suzi Clark, a University of Minnesota post-doctoral researcher who helped develop and lead the climate communicators program. “It comes down to a spiral of silence that causes people to think they’re isolated, and that most people don’t believe the climate is changing.”

Bridging that gap became the focus of a series of virtual workshops connecting participants with scientists and communication experts. Each participant also identified an opportunity to apply their new climate communication skills. Over the months, they created family-friendly events, met with elected officials to discuss local solutions and worked with municipal leaders to have their cities join Minnesota’s “GreenStep City” program.

Information about what’s happening in our backyards drives home the point that climate change isn’t only about shrinking glaciers or stranded polar bears.

Participant Stuart Giere said the climate communicators program gave him skills he wants to use to broaden awareness in the business community. For Giere, a recently retired engineer and executive, the goals hit close to his home in Spicer, Minn.

“One of my viewpoints over the years had been that climate change is hype. No more. Something is happening here, with rising waters and volatilities in our atmosphere,” he says. “There will be businesses that fail because of climate change. There will be ones that succeed and entrepreneurs that arise.”

“In terms of keeping the focus on rural audiences, this program is a trailblazer,” says Kathy Draeger, executive director of Extension’s Regional Sustainable Development Partnerships, a partner in bringing the course together.

Empowered with the skills she built in the course, Doran-Norton plans to work with Rice County’s sustainability committee and learn how other counties approach sustainability. She’s also pursuing connections to build climate stewardship within Minnesota’s Catholic community.

“There’s awe and beauty in the land,” she says. “But we’re feeling the impact of climate change right here within our own communities.”