How to identify rust 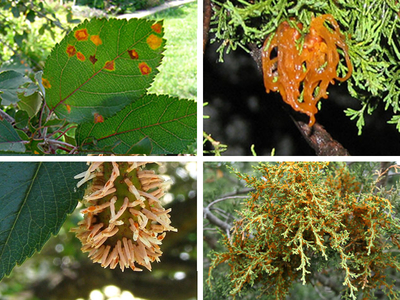 These diseases require plants from two different families in order to complete their life cycle; one plant from the Cupressaceae family (red cedar, juniper) and the other from the Rosaceae family (crabapple, hawthorn, serviceberry). Symptoms are very different on each type of plant.

Japanese apple rust is caused by Gymnosporangium yamadae, a fungus native to Asia. While this disease has been found in the Eastern U.S., it has not been identified in Minnesota. Like other Gymnosporangium rusts, this exotic disease spends part of its life on apples or crabapples and the other part on Chinese (J. chinensis) and flaky juniper (J. squamata).

Suspected cases of Japanese apple rust should be reported to the Minnesota Department of Agriculture's "Arrest the Pest" at 1-888-545-6684 or arrest.the.pest@state.mn.us.

How do cedar apple rust and related rust fungi survive and spread?

Although cedar-apple rust is the most well known, there are actually four different rust fungi that cause similar diseases on the same types of trees in Minnesota. All four require plants from two different families to complete their life cycle; one plant from the Cupressaceae family (red cedar, juniper) and the other from the Rosaceae family (crabapple, hawthorn, serviceberry, etc.). These four related rust diseases have very similar life cycles and biology.

How to manage cedar apple rust and related rust diseases

Rust resistant cultivars of hawthorn are difficult to find. Often, a cultivated variety will have resistance to one of the rusts (such as cedar-apple rust) and be highly susceptible (very likely to be infected by) to a different rust (such as hawthorn rust).

Plant disease-resistant varieties of crabapple and apple when possible. Do not plant Beacon and Wealthy apple varieties in areas where cedar apple rust has been a problem in the past. Among apple varieties commonly grown in Minnesota, these are the only two that are likely to be significantly damaged by rust.

Reference: Adapted from Diseases of Tree and Shrubs, Sinclair and Lyon, 2005.

Trees and shrubs in the Rosaceae family are highly attractive to bees, birds, and other wildlife. Avoid using fungicides if possible.

Some resistant varieties of juniper and eastern red cedar are available and should be used in areas where Gymnosporangium rusts are a known problem.