The Minnesota Department of Agriculture monitors this invasive species. Please report any BMSB you spot at Arrest the Pest. 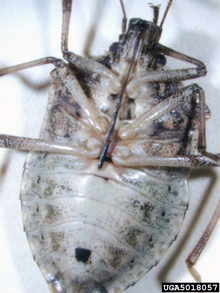 The brown marmorated stink bug (Halyomorpha halys) is not native to the United States. In the mid-1990s, it arrived undetected in a shipment from Asia.

The range of this bug is expanding across the U.S.

This invasive species can attack many crops.

You can help monitor for BMSB

If you think you have found a brown marmorated stink bug, contact the Minnesota Department of Agriculture's Arrest the Pest program.

For more information on this species, visit www.stopBMSB.org.

A free Midwest Stink Bug Assistant app has been developed by the University of Minnesota Extension IPM Program, the Minnesota Invasive Terrestrial Plants and Pests Center, and Purdue University. The app is available for both Apple and Android.