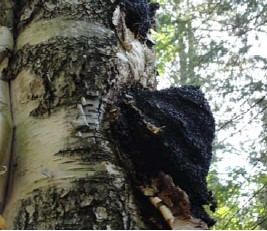 Minnesota is home to the ingredients for a folk remedy often used for medicinal purposes. Chaga is a fungus that takes the form of a conk, the spore producing fruiting structure of the fungus.

Chaga (also called the clinker polypore) is a popular folk remedy for various illnesses. Chaga and similar products have even been marketed in Russia and Japan as being anti-cancer drugs. Most people in Minnesota incorporate it into teas for medicinal purposes.

How to find and identify chaga

Chaga can be found on birch trees in forests across central and northern Minnesota. It can also be found on aspen, alder and elm trees.

Chaga can be found year round, but it is most noticeable in the winter when there are few leaves. The black, charcoal-like mass sticks out on birch trees in forests in the winter.

The conk of the chaga can be up to 30 inches long and 20 inches wide. The conk is found at a wound in the tree. Trees with chaga conks are likely dead or are in the process of dying.

How to harvest chaga 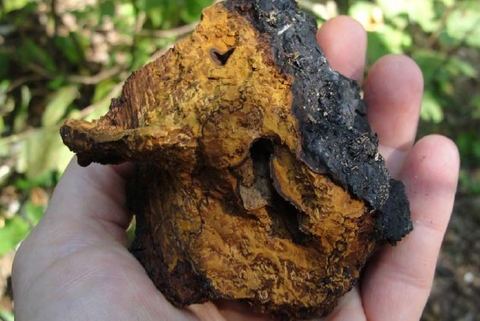 The conk of chaga can be harvested with a hatchet or hammer. Removing the conk does not harm the tree, as it is likely already dead or dying. Once harvested, the conk will regrow slowly, taking as long as 20 years to reach its original size. Be sure to check all local regulations before harvesting chaga.

Chaga can be transported easily because of its hard exterior. Store it in a dry environment with adequate airflow. There is no need to refrigerate or dehydrate chaga.

To learn more about chaga, the Minnesota Harvester Handbook has a number of tips for harvesting goods from the woods. It also has a number of helpful facts on each species, organized by season of the year.