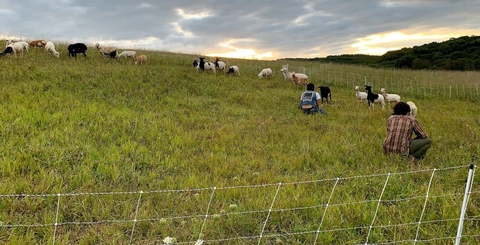 Minnesota is a culturally diverse state; its population consists of members from various racial, ethnic and religious groups. One population that has been established in urban and rural areas of Minnesota is Muslims.

The word halal describes anything that Muslims can use or engage in according to their religion, Islam. Halal food has to be prepared according to Islamic law. 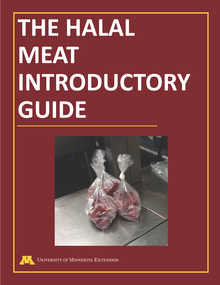 What is a domestic halal meat supply chain?

The Halal Meat Introductory Guide is an in-depth guide for farmers and ranchers interested in participating in a halal meat supply chain.

The market for halal meat in Minnesota holds untapped potential for communities throughout the state.

On the consumer side, Minnesota is home to thousands of people with an unmet preference for fresh, high quality, and affordable meats processed using halal methods. On the producer side, many farmers and ranchers across the state are looking for new markets and have an interest in serving these consumers. Each stop along the supply chain requires understanding the requirements for halal production.

Halal consumers, like people of all faiths and the secular community, have demand patterns based on seasonal events and holidays. Around these holidays, demand for certain types or cuts of meat increases.

Globally, the market for halal products is growing. The halal market is closely aligned with the Muslim population, with few non-Muslim consumers looking for halal labels on food. Around the world, there are an estimated 1.8 billion Muslims. Minnesota’s estimated Muslim population is around 150,000 people. About one-third of that, approximately 46,300 people, are of Somali descent, making them the largest cohort within the Minnesota Muslim population.

Step 2. Submit the application with all supporting documents.

Step 3. Discuss the scope of certification with an HCB representative.

Step 4. A service agreement is developed.

Step 6. Prepare for an inspection (a farm visit by an HCB representative).

Step 7. Discuss the findings of the inspection with an HCB representative.

Step 8. Perform corrective actions (if any).

To enter the halal market, a broker, producer, or processor may want to have an additional secular or non-halal market channel as well. Some animals will be haram due to being injured while in transit, co-mixing with haram products after slaughter, or for other reasons. If processed at an equal-to or USDA-inspected facility, these products can still be sold through other market channels but should not be labeled as halal. Alcohol is forbidden in halal products, and so any cleaning solvents used in halal processing should not include alcohol.

The following establishments in Minnesota have previously conducted halal slaughter under inspection according to the Minnesota Department of Health. This list may not include all establishments.

In Minnesota, halal labeling is protected under state statute, and can be oral or written statements.

The halal label is regulated under MN Statute 31.658 which states:

“A person must not:

(1)  serve, sell, or expose for sale food or food products, meat or meat products, or poultry or poultry products that are falsely represented as Halal;

(3)  make an oral or written statement that deceives or otherwise leads a reasonable person to believe that non-Halal food or food products, meat or meat products, or poultry or poultry products are Halal.

Possession of non-Halal food or food products, meat or meat products, or poultry or poultry products in a place of business is presumptive evidence that the person in possession of them exposes them for sale.

It is a defense against a charge of misrepresenting non-Halal food or food products, meat or meat products, or poultry or poultry products as Halal that the person relied in good faith upon the representation of a slaughterhouse, manufacturer, processor, packer, distributor, or person or organization which certifies or represents a food or food product, meat or meat product, or poultry or poultry product as having been prepared under or sanctioned by Islamic religious requirements.”

Livestock slaughter and processing is regulated at the federal level by the Food Safety and Inspection Service (FSIS) of the USDA. The FSIS guidance regarding definitions of halal labels defers to the Islamic authority. All livestock slaughtered for meat in the United States for interstate commerce must meet USDA standards. There are three classifications of slaughter facilities that Minnesota farmers can utilize: USDA-inspected, Minnesota “equal-to” facilities, and custom exempt.

The halal meat supply chain must follow a set of rules and regulations outlined in Islamic law, with particular attention paid to the process of slaughter, known as zabihah. The slaughtering should be done in a humane way, and the animal must be alive and healthy at the time of slaughter. The process involves restraining, stunning (if required, but the stunning should be reversible, i.e. should not kill the animal), and using a sharp knife to sever the trachea, esophagus, and main arteries, without cutting the spinal cord. While there are differences in the criteria of the halal slaughtering process among Muslims, nearly all agree that the slaughtering should be done in the name of Allah, and no other name but the name of Allah should be invoked in order for the meat to become halal for Muslims to consume. The blessing is bismillah, or “in the name of God/Allah.”

The act of slaughtering should take place quickly, with the cut made in one motion. The slaughtering blade should be newly sharpened and not lifted off the animal until the animal is no longer alive. It is also recommended to perform the slaughtering while facing Mecca. In Minnesota this is toward the northeast, as the shortest distance to Mecca is over the Arctic Circle. The animal must be respected, should not see the blade before the time of slaughter, and should not witness the slaughter of other animals.

The other requirement for halal slaughtering is that the blood of the animal must be completely drained before butchering may occur. It is assumed that some blood left in the meat and internal organs will be neutralized during cooking. Brining meat in a salt bath is not traditional practice for halal meats, in contrast with kosher tradition.

There is no complete agreement on whether or not halal slaughtering should be performed only by Muslims. Many Muslims accept meat slaughtered by a Christian slaughterer; others may reject it if they believe the slaughterer consumes pork, is not a person of good integrity, or does not invoke the name of Allah.

Any Minnesota meat processing facility is able to apply for ritual slaughter processes through MDA or USDA. The requirements for MDA are to list the name of the slaughterer, the explanation for the request, and the time period for the exemption. For a USDA-inspected plant, there is a place to select “Religious Slaughter Exemption” on the Grant of Inspection application. USDA also requires the name of the religious authority to be on file.

Halal slaughter needs to be included in a processor’s humane handling plan, which is a required document for USDA inspection. The plan needs to include information on the specific slaughterer, policies, and standard operating procedures. A letter from a religious authority is required only if the meat is to be labeled halal. If the buyer does not require labeled packaging (for example, the buyer is buying a whole carcass), a letter from a religious authority is not required by the USDA.

Similarly, for state-inspected equal-to facilities an application for exemption to utilize ritual slaughter is available from MDA and requires the name of the slaughterer, the type of ritual slaughter being practiced, and the reason for requesting exemption. The form requires only the signatures of the establishment owner/manager and the MDA representative. A signature from a religious authority is not required for the religious exemption in equal-to plants. However, any labeling of the meat may require a letter from a religious authority or certification body.

The most common method of religious processing is for a broker or a buyer to bring a halal slaughterman to the facility, rather than using a facility with a halal-trained slaughterman on staff. Religious slaughter practices tend to slow down line speeds by roughly 30 percent, adding costs and decreasing productivity. Reduced productivity is challenging in an industry with low margins and high fixed costs. Live slaughter takes longer and can increase the risk of injury for workers.

Processors typically charge for slaughter either per head or by weight. Due to the fixed costs associated with the slaughter line and the small size of goats, which means not much meat remains after slaughter and processing, goats are relatively expensive to process. Minnesota’s halal goat consumers tend to prefer smaller animals (less than 30 pounds hanging weight), which are perceived as younger and better tasting. However, there is also a market for older, larger animals because they are less expensive.

Another major issue for processors is the slaughter of hogs in the same facility as halal slaughter. Many consumers expect that halal meat was not processed in the same facility as hogs. However, this practice appears to be somewhat regular, with many halal brokers using facilities that process hogs as well. The issue of hogs on the same line is something that should be discussed in detail with any buyers, particularly with halal, because the market is highly based on trust and verbal affirmation of practices. Ideally, a processing facility that pursues halal slaughter would not also process hogs.

There are many consumers looking to buy halal meats. Make sure your market is ready to handle and sell halal products.

Recommendations for store employees on how to handle halal meat

Halal conscious meat consumers want to be sure that the meat they buy is indeed halal and that halal requirements were not compromised at any stage of the supply chain. This means knowing:

These steps can help supermarkets gain the trust of halal conscious consumers.

Access to halal food is vital for many consumers and having halal foods available in Minnesota communities addresses food insecurity. Most markets that sell halal food accept food assistance benefits like SNAP, EBT and WIC.

Currently, the majority of halal goat meat comes from Australia and New Zealand. That meat has been frozen and traveled thousands of miles before reaching its local market. Research suggests that fresh goat meat cooks better than frozen and thawed meat, both in terms of drip and cook losses and color quality.

The modern meat production chain is complex, and it can be challenging for halal consumers living in majority non-Muslim countries to know where their meat products came from and how they were produced. For example, consumers may not know if the production has taken place in the facility that produces other products that are considered to be non-halal, which must not come into contact with halal products. Therefore, when the halal certification logo is displayed on a meat product, it means that the product has been produced under strict guidance and supervision, and is permissible for Muslims. 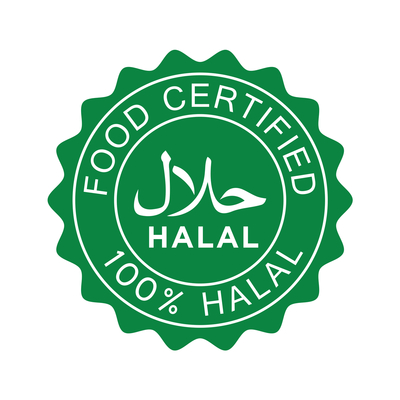 Still have questions about halal foods? Would you like to have your store added to the Halal-friendly Minnesota map?  Contact Extension educator Serdar Mamedov at  smamedov@umn.edu for assistance.

Localizing Halal Meat Production is a project that will document steps to create a local halal meat supply chain in the Willmar area, and run a pilot program to learn about buying preferences for fresh halal meat.

Working with a local goat producer, a USDA-certified halal meat processor, and Somali-owned grocery stores, project partners will create a framework that can be replicated to expand access to local halal meat. This project started in summer/fall 2021 and is supported by the Regional Sustainable Development Partnerships Southwest Region.

The Goat Meat Marketing Case Study was released in 2022. Its purpose is to share one livestock farm’s experience entering the halal market so others can learn from them. In this example, Kandi Acres marketed halal meat directly to halal stores in Central Minnesota between October 2021 and July 2022.