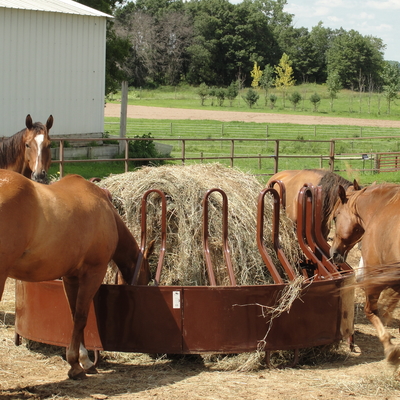 Horses efficiently digest forages, and most horses can fulfill their nutrient requirements on these types of diets.

You should choose your forage based on your horse’s nutrient needs and consider plant species and maturity when making a decision about what to feed your horse.

Legumes and cool-season grasses are common horse forages. Know what percent grass and legumes are in your hay before buying it.

Legumes include alfalfas and clovers. They generally produce a higher quality forage than cool-season grasses when baled at the same growth stage. Compared to grasses legumes are,

Alfalfa has more protein than grasses, which is highest in the leaves. As the plant matures, the protein content declines. Excess protein doesn’t affect the horse’s health but will increase their water needs. Thus, horses will urinate more and excrete more ammonia.

Some legumes are hard to dry (like red clover) when making hay, and thus have a higher risk of molding.

Cool-season grasses are grasses that thrive in cooler, wetter climates. They are popular in the Midwest and grow best in the spring and fall. The following are common cool-season grasses found in horse hay and pastures:

Compared to legumes, grasses are

Consider having your hay tested to determine the contents of hay such as:

Be sure to request an equine analysis and remember that the analysis is only as good as the sample you submit.

The maturity of a plant affects forage quality. Young, immature plants are nutrient dense and contain less fiber. As the plant matures, the proportion of fiber in the plant increases. This can decrease plant digestibility.

Grasses harvested just as the seed heads start to form have excellent fiber digestibility and energy availability, and will produce leafy hay.

A horse’s mouth, lips and tongue are very soft. Thus, they will be more willing to eat softer hay and in turn, waste less. Even if the hay has good nutritional value, it must be appealing to the horse otherwise they’ll waste it.

Sweet smelling hay is appealing to people and horses and indicates available energy (sugar). A sweet smell is an incentive for the horse to eat the hay and get its full nutritional value.

You can feed quality rained-on hay to horses.

Learn more about determining the value of rained-on hay.

Horse quality hay should be baled between 10 and 15 percent moisture.

Preservatives are commonly used during times of frequent rainfall or poor drying conditions (high humidity or heavy dew). Propionic and acetic acids are commonly used hay preservatives that are applied to hay as it is baled to allow baling of slightly wetter than normal hay with a reduced chance of mold formation during storage.

Moisture at the time of baling is directly related to mold formation.

Yearlings fed hay treated with a preservative had similar intakes and weight gains during the trial period compared to yearlings consuming untreated hay. Clinical measures of the yearling’s well-being were not affected by consumption of preservative-treated hay, indicating the preservative had no negative effects on the horses.

Learn more about mold in hay.

Hay can be baled in a variety of ways. Depending on your storage and feeding methods, each type has pros and cons.

Horse owners also commonly use round bales (800 to 1,200 pounds). Due to their size, a tractor or skid steer is needed to move round bales.

Round bales can be less labor intensive than small square bales. But when stored improperly or fed without a feeder, round bales can result in excessive hay waste. Having enough horses (i.e. more than one) feeding off a round bale will reduce waste during feeding.

Animals will make a mess of your hay storage by depositing feces and chewing through twine.

Droppings from some wildlife can cause diseases in horses like EPM (equine protozoal myeloencephalitis).

Stack bales on pallets to allow air flow under the bales and to help prevent the hay from absorbing ground moisture. Hay bales stored on wet surfaces can have as much as 50 percent spoilage.

Hay should keep indefinitely if:

Storing round bales end-to-end will reduce waste when stacked outdoors. Stacking large round bales usually increases losses, especially when stored outside. Stacking tends to trap moisture and limits drying from the sun and wind.

Outside storage loss for round bales ranges between 5 to 35 percent depending on:

To reduce this loss:

All bales began the storage period at a similar moisture.

Changes in forage quality were observed at ≥180 days of storage with a dilution of nonstructural carbohydrate (NSC) and a concentration of insoluble fiber components including NDF and acid detergent fiber (ADF) due to moisture penetration in bales tied with twin or bound in net wrap.

Combined, these results indicate that B-Wrap® was better at shedding precipitation and inhibiting moisture penetration compared to the other wrap types. This is critical as moisture can dilute beneficial nutrients leading to a concentration of insoluble fiber values.

The cost of a wrap type is a common concern for producers.

Feeding the bales to beef cattle

After an additional storage period of 4 months (16 months post-harvest or October 2018), the 24 round bales were fed to 18 Angus cow-calf pairs to determine the effect of wrap type and alfalfa cultivar on cattle preference and hay waste.

Alfalfa variety and moisture content at the time of feeding

Forage quality at the time of feeding

Mold concentration at the time of feeding

Twine tied and net wrap bales had higher mold counts compared with B-Wrap®. Current recommendations for concentrations of mold in livestock rations indicate values of 5 x 105 to 1 x 106 CFU/g are relatively safe, while >5 x 106 CFU/g should not be fed to livestock.

However, no illnesses or adverse health issues were observed in cow-calf pairs likely due to the relatively short experimental period and because most moldy hay was confined to the outer 6 inches of the bale, which cattle tended to flip out of the feeder.

Beef cow DMI during the first 24 hours was negatively associated with the mold content of the hay. These results confirmed that wrap type, but not alfalfa cultivar, influenced forage quality and mold counts in alfalfa round bales stored outdoors, which in-turn impacted cattle preference during feeding.

These projects were published in Translational Animal Science and Applied Engineering in Agriculture and were funded in part by Midwest Forage Association, John Deere, and Tama Inc.

Extension resources at University of Kentucky, Virginia Tech, University of Wisconsin, and Pennsylvania State contributed to this article.

Get the monthly horse newsletter by email.

Check out our Healthy Horse and Hay Price Calculator apps.