Crusting happens when rains breaks down soil aggregates into particles that cement into hard layers at the soil surface, when it dries rapidly. In soils that haven’t been seeded, the crust prevents further soil drying by sealing off the underlying soil from the air.

How to break crusts

You can break crusts in unseeded fields by very shallowly working the fields, no deeper than the depth of the crust. Do this with tools such as a rotary hoe, a field cultivator with narrow shovels or spikes or a rigid harrow.

Breaking the crust will help dry the field more quickly and warm the soil. Some compaction will occur due to the extra trip over the field, but the benefits of the tillage should outweigh the negatives.

In seeded fields that developed crusts after heavy rains, breaking the crusts may be crucial for good stand establishment and to avoid reseeding.

A rotary hoe is the best tool for breaking a crust. 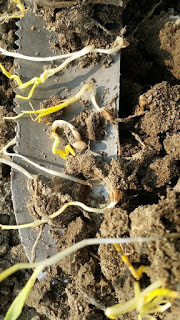 A spring-tooth harrow with the teeth set straight down instead of slanted back can sometimes be used. The circular motion of harrow teeth set in this fashion can very effectively break a crust, enough for young seedlings to emerge. Avoid a heavy rigid harrow, as too much soil movement may expose seedling roots.

If neither tool is available, running over the field with an empty double disc drill will also break the crust.

The goal of any crust-breaking trip is to crack the crust into small pieces and slightly move them around to let air and light into the soil below. Seedlings trapped under a crust will try to grow and elongate below the crust until they run out of stored energy from the seed.

The cooler the weather, the longer the seedling can survive, unless a seedling disease infects it. The warmer the temperature, the faster the seedling will try to grow and the sooner it will run out of energy. It’s important to deal with crusts soon after they form.

With any crust-breaking method, some stand damage is likely. However, compared to the damage a crust can do, the damage done while breaking crust is usually much less than what the crust itself causes.