Kiwiberry is an exciting new fruit crop for Minnesota, and many aspects of production are still in the research phase. We have compiled some region-specific production recommendations based on our research to date, and will continue to update information as we discover more.

Keep up with the latest kiwiberry research on the University of Minnesota Fruit Research site, and follow us on Instagram @umnfruit.

Kiwifruit is in the genus Actinidia, which includes about 80 species that are native to the forests of eastern Asia. Two species, Actinidia kolomikta and Actinidia arguta, can be grown for fruit in Minnesota and similar regions. These species have become known as kiwiberries because they produce grape-sized berries with a flavor similar to fuzzy kiwifruit, but a bit sweeter. Unlike the larger fuzzy kiwi, kiwiberries have thin, smooth skin and do not need to be peeled before eating.

A third species, Actinidia polygama, can also be grown in this region. The fruit has an unusual spicy, green-peppery flavor that some people find too strong.

Most kiwifruit plants are either male or female: the males supply the pollen and the females produce the berries. To get fruit you need at least one male plant for each six to eight female plants.

Several named varieties of each species are available, and new varieties will likely be available soon thanks to fruit breeding programs across the U.S.

Characteristics of kiwiberry species for Minnesota 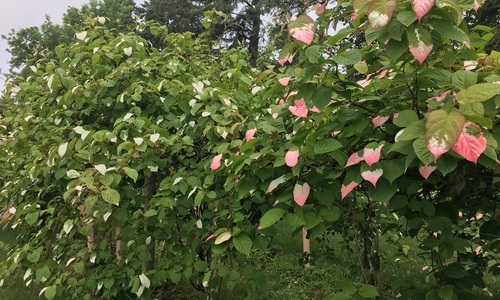 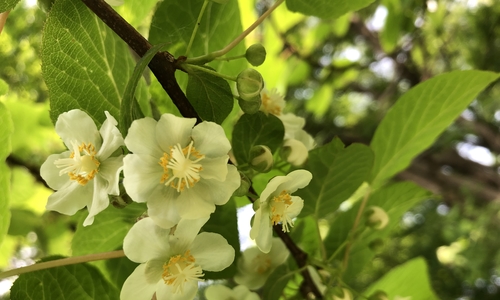 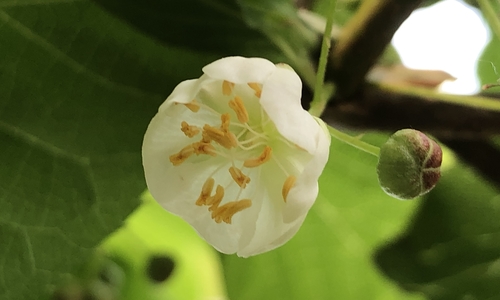 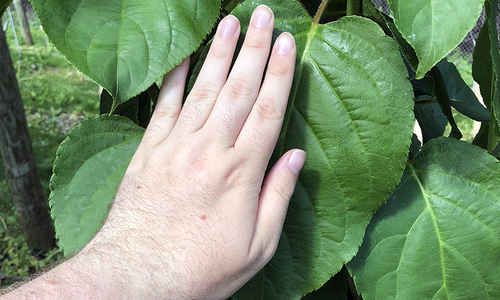 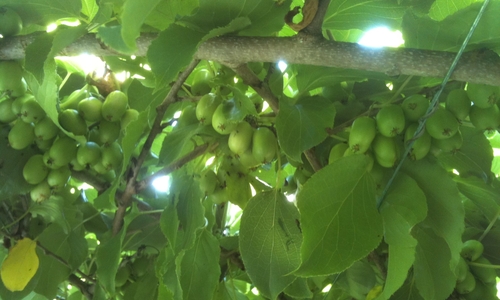 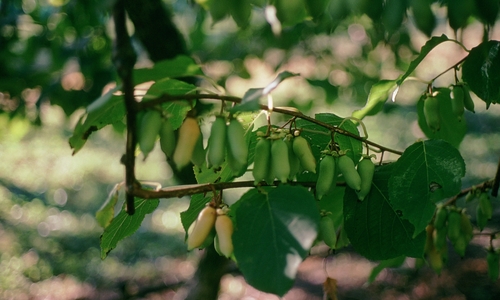 In the wild, trees shade the trunks of kiwifruit vines. The tops of the plant receive sunlight by growing up into the forest canopy. Successful vine growth and fruit production in a cultivated setting can be achieved by imitating environmental conditions found in its native habitat.

Kiwiberry grows best in well-drained, aerated, moisture-retentive soil, that is rich in organic matter and slightly acid to neutral (pH 5.5 - 7.5).

Use a 4-inch thick layer of mulch to retain moisture, regulate soil temperatures, control weeds and encourage healthy root growth. In the spring, the cooler soil temperatures beneath the mulch layer can delay budbreak and reduce the potential for spring-freeze injury.

Compared with plants grown in bare soil, A. kolomikta grown under a thick layer of mulch tends to have a much more laterally extensive and denser fine root system. Many of these roots are distributed along the mulch-soil interface and can extend several feet out from the trunk.

Vines can be trained to a pole or tree stake and then onto a trellis structure, such as a T-bar or pergola. Both T-bar and pergola trellis systems use high-tensile steel wire to support the vegetative canopy.

New vines take four to five years to train for production. Vines with an established root system that need to be regrown and trained because of winter injury may take one to three years to train.

Fifth season and beyond

Much of the vegetative growth occurs during the spring and early summer. Left unchecked, vines can grow into a tangled mess within a few seasons. In Minnesota, pruning is done in three seasons, and each season’s pruning is a little different.

Major pruning should be done at this time of year, once the soil begins to freeze. At this time, cuts on exposed wood will have the opportunity to dry out over the winter and reduce the potential for sap flow, or “bleeding” in the spring.

It is ideal to do dormant pruning in late fall before heavy snowfall. But if pruning isn’t completed in late fall, it can also be done in late winter. Prune while the soil is still frozen.

Pruning cuts made at this time of year will be subject to profuse sap-flow “bleeding." Prevent this by painting the cut areas with latex paint on a day when air temperatures are expected to remain above freezing for several hours so the paint can dry.

We do not yet have specific soil recommendations for kiwiberries, but these general guidelines have been successful in research trials:

Insect damage is rare on kiwiberry, though Spotted Wing Drosophila may appear where overripe fruit is left on the vine or on the ground. Pick all the fruit during harvest, and remove any fruit that falls to the ground.

Rabbits and deer can cause problems to the trunk and foliage.

Aside from the root rots common to kiwifruit in poorly drained soil, there are no significant diseases to worry about when growing kiwiberry.

In late winter, the warmth of the sun combined with the reflection off the snow surface heats up the wood tissue in the vine's trunk. After sunset, the temperature cools quickly and refreezes this tissue. That rapid thaw and freeze cycle can result in death of cambium-layer tissue under the bark and lead to cracking of the trunk, severely damaging the vine. This is called sunscald injury, and may be important for small scale growers.

Ways to protect vines from sunscald:

Spiral and full grow tubes or tree shelters can also prevent rabbit damage in winter. Split tubes do not protect the vines from rabbit damage, since the animals can access the trunk from the open side.

History of kiwifruit production in the Upper Midwest

Cold-hardy kiwifruit has been grown in Minnesota since the late 1800s. In one of the earliest accounts from 1892, Samuel B. Green, the University of Minnesota’s first Professor of Horticulture wrote:

A. arguta, wrongly called A. polygama – a rampant growing ornamental vine from Japan. This has been grown in a small way by R. J. Mendenhall, of Minneapolis, [in the area around present-day Lake St. and Nicollet Ave] and has been found to be unreliable. At the experiment station we lost ours the first winter it was planted.

The non-cold hardy Japanese plants likely originated from one of Professor Green’s instructors at the Massachusetts Agricultural College (MAC), now the University of Massachusetts, where Professor Green received his degree in 1879. MAC President and Professor of Botany and Horticulture, William S. Clark, brought back seeds of A. arguta and A. polygama that he and his students collected in the forests and markets near Sapporo, Japan in 1876 and 1877.

Upon his return a year later these seeds were distributed to various horticultural societies, contacts and academic institutions including Harvard’s Arnold Arboretum (1876) and Michigan State University (1878). Plants were growing in Iowa by 1884.

After the first experiments with the fruit in the 19th century, kiwiberry research continued in the 20th century. In 1902, Professor Joseph L. Budd at Iowa State University wrote:

Actinidia arguta - This is a peculiarly rampant growing vine from Japan, with a tropical expression of foliage. Where hardy east of the [Great] lakes and in the South, it will cover a fence, arbor, or trellis in less time than any vine known to the writer. In the West, north of the 42nd parallel, [the latitude for Ames, Iowa] it is not hardy enough for a permanent covering of arbor or porch; but in less important positions, if cut back severely when injured, it soon regains what it has lost, with added beauty of the new growth.

In 1905 Professor Green wrote regarding vines growing on the St. Paul campus farm:

Actinidia arguta - A rank growing climbing plant from Japan. Foliage large, handsome, has never flowered at the University Farm but has held on well and made a vigorous growth each year. We cannot advise planting as there are more desirable vines.

In 1905, Professor Green did not have access to more cold-tolerant genetic stock. At the St. Paul campus, minimum winter temperatures during the preceding two winters were -33° F and -26° F and it is likely that the Japan-derived plants that he was growing at that time were killed back to the snowline. In Minnesota, A. arguta typically requires a minimum of two consecutive mild winters in order to flower, because mid-winter temperatures below -25° F can cause vascular injury for most varieties of this particular species.

USDA-sponsored plant explorations in Russia and China during the first two decades of the 20th century introduced more cold-hardy plant material to North America. After Professor Green’s death in 1910, the Minnesota Experiment Station did not perform further evaluations of kiwiberries until the mid-1980s.

In Ottawa, Canada (USDA Hardiness Zone 3b) the most cold-hardy of the kiwifruit species, A. kolomikta, was planted in 1897 and reported two years later as being hardy. In 1931 at the Morden Arboretum in Manitoba (USDA Hardiness Zone 3a), A. kolomikta was reported to be hardy enough to survive the winters of southern Manitoba. Three Russian accessions obtained and planted in 1962 were still growing at Morden in 1970.