The way you store hay after baling can have a big effect on hay quantity and quality losses, so it’s worth investing additional resources – money, labor and equipment – in hay storage.

This preserves the value of the hay and ensures a good return on your initial investment to bale the hay. Baling uses a large number of resources, including land, labor, seed, fuel, fertilizer and equipment.

Here are some best practices for preserving the value of your baled hay.

Most dry matter and quality losses that occur during storage are due to molds and bacteria that consume hay’s nutrients. These microorganisms generate heat that causes chemical reactions and additional nutrient loss.

In extreme cases, the heat generated by molds and bacteria can cause fires, destroying the hay and the surrounding structures. Molds and bacteria grow and reproduce faster if hay is warm and moist. The more time they have to work, the more damage they can do.

In general, microorganism-caused losses are lower at lower temperatures and moisture levels and shorter storage periods. Because most hay is stored outdoors or in structures that aren’t heated or cooled, storage temperature follows outdoor temperature and is beyond your control.

We have little control over hay storage temperature, plus livestock feeders and hay processors usually need to store hay for year-round use. This means controlling moisture is probably your best strategy for limiting storage losses.

The timing of baling is critical to maximizing the hay’s value. Optimum moisture for baling is between 15 to 20 percent moisture (wet basis), which is low enough to prevent mold activity.

Baling at lower than 15 percent moisture will result in greater harvesting losses, especially for alfalfa, because leaf loss increases as moisture decreases.

Large hay packages, especially large rectangular bales, don’t lose much moisture after baling. This is why it’s important to bale at the proper moisture, instead of baling at higher moisture and counting on some natural drying in storage.

If you must bale at higher moisture, here are some options:

A study of small rectangular bales stored in a barn at the U.S. Dairy Forage Research Center in Madison, Wis. showed that dry matter loss increased with storage moisture. Quality loss was also greater in the wetter bales.

If you store dry hay outside, find ways to prevent direct contact between the ground and the bales’ bottom layer. Bales resting on the ground will absorb enough moisture to grow mold.

Research studies and farmer experience show that placing hay bales on layers of coarse gravel, old tires or wood pallets is an effective way to prevent soil moisture from wetting the hay. Studies in other states indicate storage losses are about 5 percent less for hay stored on gravel, tires or pallets compared to hay stored directly on the ground.

Hay for the study was third-cutting alfalfa baled at about 18 percent moisture in September 1996. Researchers baled half the hay as large, round bales, measuring 5 feet in diameter by 6 feet long. The other half was baled as large rectangular bales that were 3 feet by 4 feet by 8 feet.

How bales were stored

Rectangular bales were stored in piles of 11 bales, all oriented the same direction, and resting on their four-foot-wide sides. Researchers stacked nine rectangular bales three wide and three high, and placed two bales on the top over the cracks between bales in the lower layers.

Bales were stored until mid-June 1997 (about eight months) and then reweighed, resampled and sold. 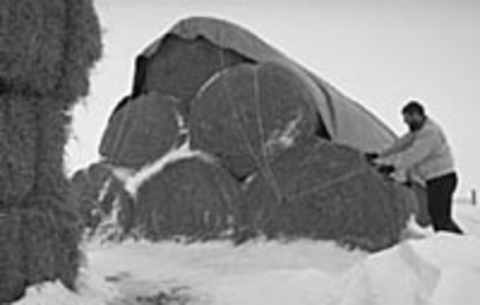 In the Morris study, researchers found the bottom bales stored uncovered on sod were rewet. This was true for both round and rectangular bales.

Moisture content went from 18 to about 32 percent, high enough to cause significant spoilage by mid-June. Spoilage would’ve been worse if they left bales in place through the summer.

The percentage of the total volume of bottom bales that appeared to be spoiled was about the same (22 to 23 percent) for both round and rectangular bales. By comparison, 1 to 8 percent of bottom bales spoiled if they were stored on gravel or in the barn.

If you’ll process the hay in a hammer mill or other processor that could be damaged by foreign objects, make sure stones don’t adhere to the bales’ bottom layer. Reduce problems with stones by using larger-sized gravel or crushed rock for the base, or by using pallets or tires instead of gravel.

When bales were stored uncovered on sod in Morris, the upper layers of round bales didn’t show any increase in moisture. Rectangular bales’ upper layers were rewet slightly to an average of about 22 percent moisture.

Even though the average moisture absorption in the upper layers was relatively small, the watershed locations (points where water ran off an upper bale onto a lower one) showed greater moisture increase and very obvious mold development, particularly in the large rectangular bales.

Dry matter losses caused by the combination of soil moisture and precipitation can be fairly large.

In the Morris study, average dry matter losses in the uncovered piles on sod were 11.2 percent versus 2.3 percent in the barn. It appears that for eight to nine months of storage, keeping bales off wet ground and under cover can offer a 6 to 11 percent advantage.

Besides losing dry matter, uncovered hay also loses quality, as determined by nutritional analysis and appearance. The loss in dry matter reduces weight available for sale and the loss in quality can have a large impact on animal performance and hay value.

In just eight months, the differences in hay weight, quality and price resulted in hay stored in the shed being worth about $3,350 more per 100 tons harvested than hay stored outside on sod. These numbers show it’s worth considering an investment in tarps and gravel, or even hay storage sheds.

Round bales vs. rectangular bales

There is no clear advantage for one bale type over the other.

Despite the tendency for uncovered large rectangular bales to absorb more moisture than large round bales, our Morris study indicated no significant difference in average dry matter loss for the two bale types over an eight-month storage period.

Hay waste can occur during both storage and feeding. Research shows outdoor hay storage losses for round bales can range from 5 to 35 percent depending on precipitation, storage site and the bale’s original condition.

For example, the outer 4-inch layer of a 6-foot diameter, round bale contains about 25 percent of the total bale volume and is most likely to be damaged by weather if stored improperly or unprotected. 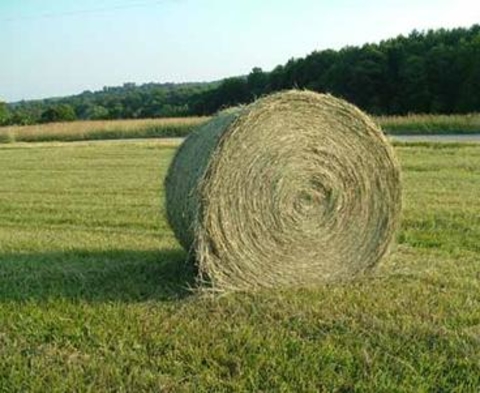 A number of techniques can minimize outdoor storage losses of round bales: