What you need to know

The soil test report can be complicated and confusing. This article covers the basics

When a lab analyses soil samples for nitrate-nitrogen (NO3--N), they will report the results in two ways. The concentration is reported in ppm. Then, depending on the depth of sampling, the concentration is converted into pounds of NO3--N per acre for each increment of depth that was sampled. For example, if the samples are in depths of 0 to 8 and 8 to 24 inches, the amount of NO3--N at each depth is reported in lb. per acre. The total for the 0 to 24 in. depth is calculated as the total at 0 to 8 and 8 to 24 in. The sample calculations also apply to other depths sampled.

The units chosen to report the analytical results do not have any effect on fertilizer guidelines. It is important, however, to be aware of the difference between ppm and lb. per acre when reading the units associated with the numbers on the soil test report. 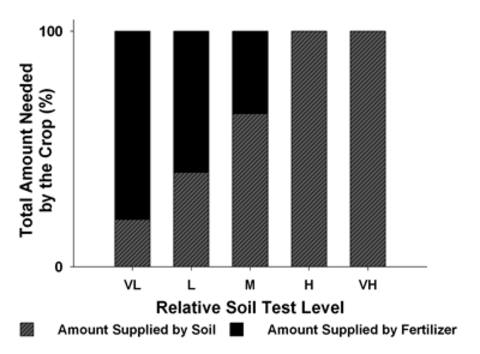 The numbers listed on most soil test reports are usually followed by one of the following letters:  VL, L, M, H, or VH. These letters are abbreviations for very low, low, medium, high, and very high, respectively. These letters designate the relative level of the nutrient measured and provide a good indication of the probability of measuring an economic increase in yield if fertilizer supplying the nutrient in question is applied. For example, if the relative level is very low, there is a high probability that crop yields will increase if fertilizer supplying the nutrient in question is applied. By contrast, no increase in yield from the application of the nutrient would be expected if the relative level in the soil is in the very high range. Figure 1 illustrates the relative proportion of nutrient needed from either soil or fertilizer at the various soil test levels.

The number associated with any nutrient on a soil test report is an index value associated with one of the five relative levels. It is not the amount of a nutrient that is available for crop use. It is not the total amount of a nutrient present in the soil. The number listed is an index value only and when combined with an expected yield can be used to develop a fertilizer guideline.

The soil test report also shows the pH of the soil sample and, if acid, provides a guideline for the amount of necessary liming material. In analysis, the lab will mix the sample with water, stir, then take a pH reading to get the soil pH value. If it is less than 6.0, the lab will mix the soil with a buffer solution and take another reading, known as the buffer pH, which determines the rate of lime to apply.