Kernza is more than just a grain. It is defined as the trademarked name for the perennial grain harvested from an improved variety of intermediate wheatgrass co-developed by the Land Institute and the University of Minnesota. But it represents “a web of people with a storied vision to make agriculture, farmers and the world better.”

Those are the words of Connie Carlson, who joined University of Minnesota Extension’s Regional Sustainable Development Partnerships (RSDP) in 2016. Her role focuses on getting new sustainable crops developed by the University’s researchers in the Department of Agronomy and Plant Genetics from fields into supply chains and onto our dinner plates.

Carlson’s work takes her out into rural and urban communities, visiting farmers, businesses, processors and entrepreneurs interested in working with Kernza and the 16 other crops in the University’s Forever Green portfolio. Working with these stakeholders has led to more products in the market for consumers.

Kernza has been a popular feature at the Minnesota State Fair, can be found on tap at breweries across the state and is heavily featured in James Beard Award-winning Beth Dooley’s cookbook, The Perennial Kitchen.

“I’ve always loved bread and the different kinds of flour you can use to make bread,” says Dooley. “Americans in particular have a romantic affinity to wheat.” (Kernza can be considered a cousin to wheat.)

Michele Huggins, owner of DoughP Creations, a bakery in Granite Falls, embraces the organic grains she gets from a local farmer. Huggins is actively involved in food systems work in her community and serves as a board member of the RSDP Southwest Region. “I’m used to using ancient and heritage grains and am grateful for the people who introduced me to Kernza,” she says. “I keep an open mind.”

Carlson gave Huggins some of the first samples of Kernza she tried, and she now gets it from a local farmer. “Her connections to local farmers and her community, along with her open, exploratory attitude make her a great partner,” says Carlson of Huggins’ pioneering involvement.

During a Kernza Field Day last summer in Madison, Minn., Huggins shared a sourdough that was 75% Kernza, more than is usually used in bread baking. The experiment worked, but there is much to be learned about Kernza in the kitchen.

Farmers play a critical role when they collaborate with the University, including providing key production and economics information on how new crops like Kernza function in farm-scale operations and rotations.

Carlson’s father, Minnesota farmer Carmen Fernholz, was the first to introduce her to Kernza, even before she had joined RSDP. Fernholz has worked with University researchers on organic research for decades and got Kernza seed from Don Wyse, co-founder of the Forever Green Initiative.

Kernza is now at an exciting opportunity point for growth. “The crop wasn’t ready for midscale cleaners and millers even five years ago,” says Carlson. “We were delivering sacks of grain and flour in our cars to our partners.” The demand for Kernza continues to grow, which means more farmers will need to grow Kernza to supply the market.

In the past year, Kernza has moved forward on a larger scale, with increased acres and supply now available. Whole Foods named Kernza among the “Grains That Give Back,” predicting sustainably produced grains to be a top food trend of 2022. Phrases like “soil health” and “regenerative ag” have made their way into the public lexicon.

“Consumers now have great options for bringing Kernza into their kitchens,” says Carlson. “It is just the beginning of what Kernza’s champions — the farmers, businesses and communities — hope the marketplace will support.”

Cereal, bread, cookies and beer are just some of the ways Kernza shows up at the table. Photos: Mette Nielsen 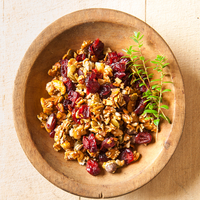 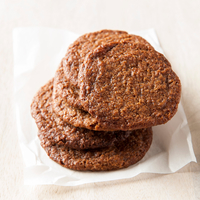 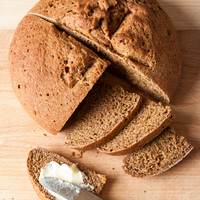 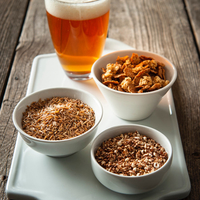 Kernza Crackers, from The Forever Green Cookbook: Recipes and stories from the University of Minnesota’s fields and kitchens, by Beth Dooley

Makes 24 to 32 two-inch crackers.
This basic recipe is open to all sorts of variations. You can add chopped fresh herbs or spices, or create sweet versions by topping with a sprinkling of cinnamon sugar. Serve with sharp cheese or jam.

Preheat the oven to 400 degrees F. In a food processor fitted with a steel blade, process the flour and salt. Pulse in the butter until blended, 20 seconds to 1 minute. Add the water and pulse until you have a crumbly dough that holds together. If the dough is too dry, add a little more water a tablespoon at a time. If it’s too wet, work in a little more flour. Gather the dough into a ball and turn out onto a lightly floured surface. Using a lightly floured rolling pin, roll the dough into a rectangle that’s about ¼ inch thick (or thinner). Using a sharp knife, score the dough into 3-inch squares and set on a lightly floured baking sheet. Bake the crackers until browned, about 10 minutes. Cool on a rack. Store in an airtight container.