Quaking and bigtooth aspen (popple) are principally grown for pulpwood that’s used to manufacture paper and particleboard. They are also used for sawtimber and veneer. Paper (white) birch is in less demand than aspen, but can be used for pulpwood, lumber, fuelwood, dowels and novelty items.

Both aspen and birch commonly grow in pure stands, but they are also found together or mixed with other hardwood and conifer species. On this web page, we focus on aspen, which is currently in greater commercial demand than birch.

Aspen will grow on a great variety of soils, but the fastest-growing, best-quality trees are often found on moist soils that are rich in lime and have high silt-plus-clay content.

Trees on dry, sandy soils grow slowly because of low moisture and nutrient levels. They are also more prone to health problems than trees on better sites. Heavy clay soils don’t promote the best growth because of poor soil aeration.

If you work with a forester, they may use a site index to evaluate the productivity of different sites on your property. A site index is used when aspen stands are at least 20 years old and haven’t been damaged by fire or overtopped by other species.

Poor-quality sites may be better suited for other species, as aspen will grow slowly and be at risk for health problems. However, you can grow some aspen for non-timber purposes such as wildlife (particularly ruffed grouse) or aesthetics. 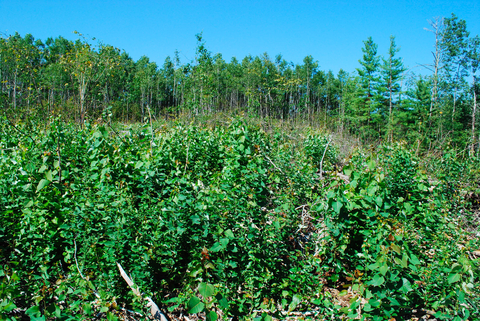 Aspen stands are commonly regenerated from root suckers. These are sprouts that rise from a stump or tree root system that occurs on aspen stumps after harvest.

Because aspen is very intolerant of shade, root suckers regenerate best when the stand is completely clear-cut. Don’t leave more than 20 mature trees per acre after harvesting the stand.

If logging does not destroy undesirable trees and shrubs, remove them by:

Clear-cut when the soil is relatively dry or frozen to avoid damaging the parent roots. This is especially important in stands growing on clay soils with a high water table.

Root suckers grow fastest when trees are harvested during the dormant season and they have the maximum amount of food reserves stored in their roots. Root suckering may not be satisfactory if you harvest trees in the spring or early summer shortly after the leaves and flowers have been produced.

If you harvest a stand during the growing season, root suckers will begin to grow immediately after trees are felled. Don’t drive heavy equipment across young sprouts or they’ll be killed. To avoid damaging new sprouts, begin the logging activity at the rear of the stand first and progress toward the area where logs will be processed and loaded onto trucks.

It may be difficult to regenerate old, decadent stands with low vigor and stands with fewer than 50 mature aspen trees per acre. In these stands, you can encourage maximum suckering by harvesting during the dormant season and when the ground is frozen or relatively dry.

If an old stand does not have enough wood you can sell, you should still fell the trees or shear them using a sharp blade on a bulldozer when the soil’s frozen. This will stimulate suckering and help create a better-stocked, new stand.

If root sucker density appears low after the clear-cut, have a forester judge whether the stand is adequately stocked. If not, wait at least 10 years, then clear-cut the stand again. After this second clear-cut, sucker density should improve to a satisfactory level.

Aspen won’t compete well in mixtures with other hardwood species such as maple, basswood, ash and oak. Over time, the aspen will die from disease and get replaced by more shade-tolerant species.

You can manage mixed hardwood stands either for aspen or other hardwoods, but you can’t effectively manage both. If you clear-cut a mixed stand, it’ll favor aspen regeneration. Removing aspen during thinnings will favor regeneration of other hardwood species.

In the northern lake states (Minnesota, Wisconsin and Michigan), it’s common to find mature aspen with an understory of immature white spruce and balsam fir — two shade-tolerant conifers. You can manage these three species together.

If you carefully harvest the aspen and leave the conifers undamaged, openings in the conifer canopy will be large enough to allow good aspen sucker development in scattered patches. In 40 to 50 years, the conifers and aspen will mature. Clear-cutting will then regenerate a stand of mainly aspen with a few scattered spruce and fir. 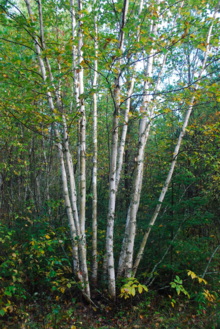 Natural seeding from narrow, progressive clear-cut strips and small patch clear-cuts is the most common regeneration method for birch. When you clear-cut, it’s essential to knock down brush and expose bare mineral soil.

If a clear-cut through a birch stand has to be more than 300 feet wide, leave enough seed trees scattered throughout the site. This way, you’ll adequately disperse seeds while helping seed trees survive and protecting new seedlings. Remove seed trees within two years after acceptable regeneration.

On hot, dry sites, a two-cut shelterwood system may be more successful than clear-cutting for birch. The first cut should thin the canopy and provide more sunlight to the forest floor.

A year after the first cut, scarify the soil on the site:

Scarifying is especially helpful following a good seed fall. After the stand is sufficiently stocked with seedlings, clear-cut it. 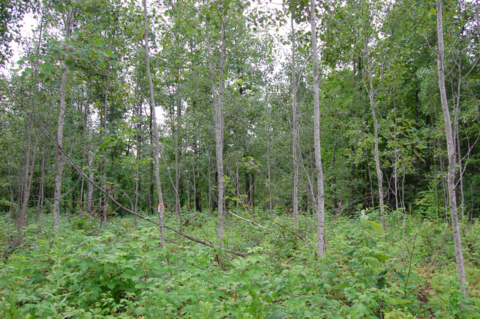 Once an aspen stand has regenerated, trees grow rapidly. A densely stocked stand naturally thins, so you don’t need artificial thinning to produce pulpwood. Plus, it may increase losses from Hypoxylon canker and rot (PDF).

However, only thin to grow these products when disease incidence is low and the anticipated height of the trees at 50 years old is 70 feet or taller. It may be appropriate to do one thinning at about age 30 that leaves approximately 240 trees per acre. Take great care to avoid wounding residual aspen trees, because decay and discoloration can enter trees through those wounds.

Both can dramatically reduce how much healthy aspen you can sell. As stand age increases, volume losses due to insects and disease increase.