Cool-season grasses in the Midwest 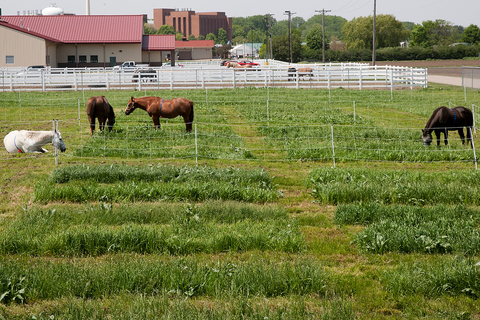 As selective grazers, horses may limit the yield and persistence of some pasture grasses. Their lips and tongues allow them to graze plants to a shorter height than other livestock species. As a result, forage yield and consistent growth are key when selecting grasses for productive pastures.

Perennial ryegrass is a cool-season grass known for its high seedling vigor, yield and nutritive value. Perennial ryegrass thrives in regions of the U.S. with milder winters, but lacks the winter hardiness needed to persist in the Upper Midwest.

How the research was completed?

The following grasses were established in St. Paul and Grand Rapids, Minn. pastures in the late summer:

Grazing began the following spring with horses in St. Paul and beef cow-calf pairs in Grand Rapids. The animals grazed the grasses in a monthly rotation during the grazing season for two years.

Before grazing, we took yield and quality samples of the grasses. After grazing, we recorded the percent of grasses removed to determine preference. In the spring after two years of grazing, we also measured stand persistence of the seeded grasses.

During the winter following the second year of grazing, much of Minnesota had over a week of very cold temperatures, where the overnight lows ranged from -15 to -44°F. These temperatures likely caused poor persistence in the perennial ryegrasses in Grand Rapids even though the fields had snow cover.

Perennial ryegrasses were among the highest for the following

Perennial ryegrasses were moderate in nonstructural carbohydrates at 12 to 16 percent and among the lowest for neutral detergent fiber at less than 54 percent.

Livestock tended to prefer grasses with higher crude protein and energy content over grasses with a higher neutral detergent fiber. More preferred grasses tend to result in better uniform grazing and maximize forage use by livestock.

The research was funded by the Minnesota Department of Agriculture.

How the research was completed

We grazed four adult horses on the following species in pure stands:

The horses grazed the research area for three consecutive days each month from May to October in 2010 and May to September in 2011.

In this study, the highest yields for most grasses occurred during summer. Of the total forage yield, 40 percent occurred in the summer for 2010 and 83 percent for 2011.

In pasture systems, you can maintain immature plants by frequently grazing horses and routinely mowing. This practice allows for similar plant growth rates throughout the season.

Overall, creeping foxtail was the lowest quality cool-season grass. Levels of non-structural carbohydrate (NSC) were similar among the grasses in spring and fall.

Horses are selective grazers, but we know little about what drives horse preference in a pasture system. In this study we found that in 2010:

More persistent species such as orchardgrass can continue to regrow during stem lengthening.

In general, we recommend starting grazing when tall, cool-season grass pastures are at six to eight inches in height. This recommendation will likely result in reed canarygrass, smooth bromegrass and timothy being at the stem lengthening stage at the start of each rotational grazing period.

As a result, these plants may be particularly prone to poor persistence. Avoid grazing horses during the stem lengthening stage or avoid using these grasses in pastures.