How to identify squash bugs

At first, the young nymphs have a light green abdomen and black heads and legs. As the nymphs grow larger, they first turn light gray and then brownish-gray, with black legs and antennae.

Squash bugs can live through the winter as adults in sheltered places, such as under plant debris, around buildings, or under rocks. When adults come out in the spring, they fly to growing cucurbit plants to feed and mate.

Female squash bugs lay small clusters of eggs (about 20) on the undersides of the leaves, especially between the veins where they form a V. Eggs may also be seen on stems. The females usually start appearing in gardens in early June and continue to lay eggs through mid-summer.

Eggs hatch in about 10 days, and nymphs mature in about four to six weeks. Both adults and nymphs hide under leaves when disturbed.

One generation develops each year, although it is possible that in some summers there is a partial second generation.

The life stages overlap and all of them can be seen at any given time during the growing season. In the fall, especially after the vines have died, the adults and nymphs group together on squash fruits.

The adults fly or crawl to sheltered places for the winter. The nymphs die when temperatures drop to freezing. 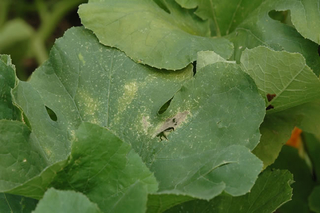 Squash bugs primarily attack squash and pumpkins, although they can also attack other plants in the cucurbit family, such as cucumbers.

How to protect your plants from squash bugs

Pick bugs off the plant early

Insecticides are normally not required to manage squash bugs. However, if cucurbits are found wilting early in the season due to squash bug feeding, then an insecticide application is probably needed to manage them.

Be sure that the vegetable you wish to treat is listed on the label of the pesticide you intend to use. Also be sure to observe the number of days between the last pesticide application and when you can harvest your crop (pre-harvest interval, PHI).