Risks of working in grain bins 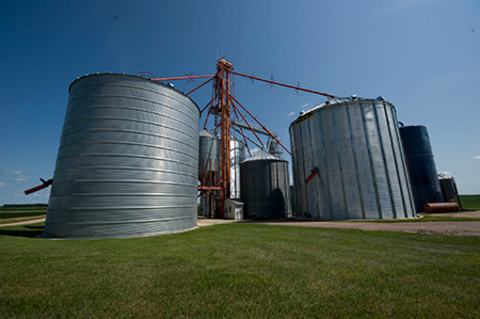 On average, nearly two dozen people are killed each year in the U.S. in grain entrapment incidents. Flowing grain is dangerous, and behaves much like quicksand. In four seconds, a full-grown adult can sink knee-deep from the suction of flowing grain. In just 20 seconds, they can be completely buried.

The pressure of the grain usually hinders self-escape, and can even make assisted escape near impossible. A person buried to the waist in grain requires a force equivalent to their own body weight plus 600 pounds to free them. The force required to remove a person buried under grain can exceed 2,000 pounds.

Around 80% of reported engulfments involve a person inside a bin when grain-unloading equipment is running. Engulfments in flowing grain can also occur in outdoor storage piles, grain wagons, rail cars and semi-trailers that unload from the bottom.

Spoiled grain clumps together and can develop a crust on the top surface. This crust appears solid, but it is unstable and may hide open voids below that develop as grain is removed.

Bridged grain can collapse under a person’s weight, resulting in the victim being buried by falling and shifting grain. If unloading equipment is running at the time this occurs, the victim can be rapidly pulled down toward the bottom of the bin.

Spoiled grain can form a clumped mass that adheres to the vertical wall of a bin. Entering a bin to dislodge a vertical wall of grain that is higher than the worker is dangerous because the grain wall can suddenly break loose and fall like an avalanche, burying or injuring the victim.

Maneuvering the vacuum tube can be awkward, increasing the operator’s risk of slipping or losing balance as he or she tries to reposition the hose in flowing grain. If the operator falls or struggles for position, body movements can trigger an avalanche of grain if the slope of grain is steep.

The most common reason people enter bins is to address problems associated with spoiled grain.

To reduce the chance of grain spoilage:

Work from outside the bin

Create a safe environment on your farm

Take proper safety precautions if you need to enter the bin