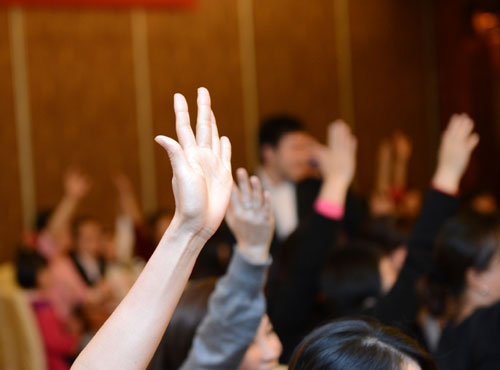 Minnesota's voter turnout is impressive — almost 19 percent higher than the rest of the nation's over the past decade.

But, is voting all it takes to sustain a thriving democracy?

A study conducted by the Bush Foundation considered deeper questions about Minnesota's civic life. The foundation learned that only half of those surveyed felt their community was strong when it comes to working on problems together. Almost 13 percent didn't think people in their community work on problems together at all. Moreover, almost 22 percent disagreed or strongly disagreed that they themselves can "make a difference in improving the quality of life in my local community."

Extension's leadership and civic engagement educators believe Minnesota can do better. That's why they've examined civic engagement for the past decade, considering scholarly work as well as practical techniques that help local leaders involve a wider swath of the public.

Now, this team is sharing what they're learning by bringing government staff and community partners into long-term cohorts to learn ways to design civic engagement strategies and apply them to local problems. Some issues addressed in civic engagement cohorts or similar venues include water quality, poverty, and priorities for local government in light of budget cuts.

Communities are where democracy happens daily, and where the barriers to working together to create solutions can frustrate leaders and citizens alike — testing our democratic idealism.

"A major barrier to civic engagement is that it takes time," says Lisa Hinz, one of Extension's leadership and civic engagement educators. "I say this as an educator but also as a citizen who cares. It's hard to know where to contribute as a citizen in day-to-day life — it's busy and issues can be complex. That's why citizens 'hire out the work.' We rely on elected leaders and government workers to take care of public problems."

But elected officials and government employees don't always have sufficient information to solve public problems effectively. Some issues need involvement that only community residents can provide. And deeper engagement in developing solutions from the community ultimately helps those solutions stick.

To help government engage the public, Extension's team created a model for, and educational materials about, civic engagement and its outcomes (*see link below for more information). One desired outcome of using this model includes "resourceFULL decisions." Barb Radke, co-developer of this model, says "ResourceFULL decisions happen when information from multiple perspectives is considered. Once decision makers and the public are exposed to information from many points of view, decisions are better informed, and they are more likely to gain public buy-in and trust, even among those who didn't get the decision they want," she says.

Tapping many points of view is particularly important when it comes to what some scholars call "wicked problems" — complex public problems that no one group or government jurisdiction can solve. In wicked problems — like preserving water quality or alleviating the effects of poverty — issues present themselves, but underlying issues cause people with different perspectives to come to different conclusions about solutions.

Regarding water quality, for example, the presenting issue is the entire community's need for clean water, but an underlying issue is that water serves many purposes — economic, recreation, health and well-being. That's why information drawn from multiple perspectives must be heard to discover solutions.

A continuum of engagement

Engaging residents to provide these perspectives can be difficult when they have tried to contribute in the past only to become disillusioned or frustrated by the results. Radke notes that a first step in creating a process that doesn't frustrate participants is to communicate honestly about the purpose of a meeting. "Sometimes, public meetings are convened just to share information about decisions that have already been made," Radke says. "There's nothing wrong with that; in fact, there are times when decision-makers are limited in how much influence community members can have." (For example, local governments may simply be implementing laws imposed by state or federal government.) "But transparency is key," Radke adds. "When leaders promise engagement but don't listen, they break the public's trust."

The International Association of Public Participation has developed a continuum of engagement, noting that strategies to engage the public should match the commitment local leaders have communicated (**see link below). Fact sheets, websites and open houses can help officials fulfill a promise to keep the public informed. Surveys can collect concerns and feedback as officials weigh alternatives.

At the other end of the continuum, civic engagement goes well beyond providing information. It can involve forming partnerships with the public or even place decisions in their hands. To fulfill this promise, careful processes need to be designed.

Creating partnerships with the public

This stage is about understanding the circumstances in which a community is working on a problem. Do concerned citizens know each other well? Are they ready to work together? Could other conflicts get in the way? "Many local considerations need attention in preparing for community conversations," says Lisa Hinz. "And these factor into the design of those conversations."

Great attention to the logistical aspects of the meeting makes a difference — everything from where a meeting is held to how the room is arranged and what questions are asked. Years of experience in planning public meetings has caused John Kinsley, water planner for Brown County, MN, to abandon traditional meeting spaces. "The setting of a meeting is as motivating to participants as the meeting itself," he says. "I convene meetings in places where different land use happens — rural and urban — a variety of ecosystems. That gives participants visual information about land-use priorities and problems that are impossible to convey in conversations. I'm pretty much through with holding meetings in the courthouse."

Other important planning considers what might go wrong. In civic engagement cohorts, educators balance providing information to leaders with planning for potential problems. In these conversations, leaders ask each other critical questions they must consider in order to improve chances for a public meeting's success. Questions might include: Are you assuming too much about what the public already knows about the issue? What are you going to do if you ask a question and hear crickets? Is there a way to make the process enjoyable for participants? "The experience and feedback from others make a big difference," says Radke.

This part of the civic engagement process explores the issue at hand and brings all kinds of information to the table, including technical knowledge and lived experiences. Inquiry takes time, but those who make an adequate investment in this part of the process have seen new solutions emerge from involvement that only the public can offer.

"For one thing," says Hinz, "people know what they are willing to do voluntarily to solve a problem — what actions they are willing to take." For example, some local watershed organizations and conservation districts work with volunteers in neighborhoods to put rain gardens on their property to absorb runoff from roofs, driveways and other construction and improve water quality. Voluntary changes at the household level make a difference, and those actions can influence others, like neighbors and friends, to join the effort.

Both government and the public benefit when the inquiry process uncovers layers of local knowledge. For example, when the League of Minnesota Cities (LMC) conducted conversations with the public in 2011 about priorities for city services in light of budget reductions, they discovered that their process (assisted by Extension) changed the conversation AND created a positive public response. LMC's final report described the benefits. "The way information is presented really matters. Providing solid, unbiased background information in a way that is accessible and avoids triggering ideology is key to having productive conversations. People were able to move beyond rhetoric and ideology to talk about what different policy choices [about city service priorities] would really mean for them, and even for people they don't know, Residents that came to the conversations left the events wanting more — more information, more conversation, more input about future policy choices."

Further dialogue deepens understanding of the issue and generates new options for addressing the problem. At this stage, groups consider the implications of potential decisions from many points of view. In St. James, MN, for example, dialogue about how to spend some available grant funds generated an option to alleviate the effects of poverty that hadn't been considered — a bus shelter for children in neighborhoods where parents needed to leave home early to go to work. Latino parents who'd been invited came up with the idea, noting that their children had long waits on cold, wind-blown streets. Although this need had never occurred to those outside the Latino neighborhoods, the town worked with the Latino community to build the shelters. "Our ESL families stood before a crowd of people and shared their concerns. Never has that happened on an equal playing ground," said Sue Harris, project leader.

Deliberation to combine — to synthesize — everything learned or discovered through the process leads groups to choose a solution and create plans. While absolute consensus is not always possible, discussion can at least create general support for a plan, or prevent opposing sides from blocking a plan that is put in place.