Walmart communities find there is room for more 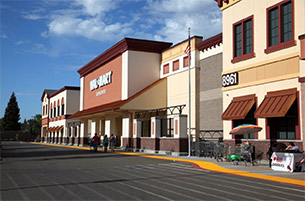 When a Walmart Supercenter opened in Winona, Minnesota in 2003, there was definitely a churning among local businesses. "Businesses get concerned," says Della Schmidt, president of the Winona Chamber of Commerce. "Some retail operations that were already struggling chose to close their businesses. But others were attracted to Winona or stayed in town because Walmart made us more of a regional center."

Eleven years later, what has been the net effect?

Bruce Schwartau, Extension Community Economics educator who specializes in Minnesota's retail sector, wanted to do a better job of explaining to communities what might happen after Walmart comes to town. "It is clear that Walmart has greatly changed the Minnesota retail climate. In the past couple of decades, we've seen some cities actively resisting expansion of Walmart Supercenters into their markets. Now that the disruption has occurred, we should be able to accurately describe the outcome."

This year, Schwartau investigated which businesses opened or grew in towns after the arrival of a Walmart, and investigated retail sales at the micro level to discover what kinds of products and services are now offered by other retailers in Walmart towns. His study, Room for more: A study of Minnesota retail and service businesses that open or expand after the opening of Walmart Supercenters was published by Extension's Center for Community Vitality in October of 2014. The study was funded by the EDA Center at the University of Minnesota Crookston.

Schwartau led a team of Extension educators who interviewed leaders of chambers of commerce, economic development organizations, Main Street initiatives, and city government in 13 Minnesota cities. (See map, right.) From these leaders, they collected information about store openings and expansions since Walmart came to town. The cities were selected to give the study geographic diversity and to achieve the study's goal of examining a representative number of Greater Minnesota cities where a Walmart Supercenter opened.

Community leaders helped Extension educators identify current businesses that either opened or expanded after the arrival of a Walmart Supercenter. Expansions included significant remodeling, enlargement, or relocation. Schwartau then recorded business names and type at the NAICS 4-digit level, which pulls out specifics about type of product and service. "My goal was to understand the products and services these stores offered, because that gets at business planning," says Schwartau. For example, examining stores at a three-digit level shows that a store sold clothing and accessories. That's interesting to economists. But at a 4-digit level, you learn the store sold shoes. That's helpful to local economic developers who need to choose retailers they might attract or support because they are more likely to succeed.

Information from the Minnesota Department of Revenue also came in handy. With information about taxable sales, Schwartau was able to tell the whole story of the relative health of each community's retail sector through the years.

The study found that a wide variety of business types coexist with Walmart. The 13 cities reported that more than 115 business types opened or expanded since the supercenter opened. Taking a closer look at these business types, Schwartau found some affirmations and some surprises.

"We anticipated surviving businesses would offer different products and services, but the numbers were huge. This is something that we've been telling communities for years - you don't want to sell the same things Walmart does, because you probably can't compete," says Schwartau. "Of the new and grown businesses, food services and drinking places dominated. Then you go to personal services (hair care, tanning salons, nails, etc.). And even when you go to the number three growth category -- 'Miscellaneous store retailers' -- you dig deeper and you see that's mostly about used clothing stores. These are all products that Walmart doesn't touch."

But one exception surprised Schwartau. "Thirty-one of the stores that offer health care products opened or expanded. Walmart carries many of those same products. So it looks as though other pharmacies and health care options are competing in some other way - convenience, service, or perhaps product lines."*

So the good news is that it really is possible to thrive as a business owner in a Walmart town.

The bad news, however, is how much Walmart affected grocery stores. A study in Iowa (Artz and Stone, 2012) showed this and Extension's study confirmed it. If Walmart competition wasn't hard enough to deal with, Schwartau notes that convenience stores also grab market share from grocery stores. "This just points to a need for complete rethinking of business plans for rural grocery stores," says Schwartau, who is considering a future study of grocery stores that thrive in rural areas.

Another surprise was how well Walmart communities survived the Great Recession and the overall retail downturn from 2004 to 2011. The report notes that, "Cities that had a supercenter before 2004 maintained a relatively steady retail market. Because these cities had steady markets during a retail downturn, it is likely that smaller cities around them lost sales. But having this larger trade area may also have contributed to openings or expansions for many other businesses in the community."

During the recession, Walmart towns experienced a decrease in their revenue that was less than the average town in Greater Minnesota. Ironically, a deeper look showed that general merchandise stores (of which, Walmart is one) actually suffered more than the stores around them during the recession. He hypothesizes that having one big box breeds more, and the accumulation of other big boxes that sell, for example, building supplies, increases retail share.

"Walmart has a loyal customer base," notes Della Schmidt, who has 22 years of experience with chambers of commerce and has watched Walmart come to town in two communities. "Customers come to Winona for their Walmart experience and can take advantage of other stores while they're here. This definitely makes us more of a regional center."

Is Walmart good for communities?

Study leaders are quick to point out what this study IS NOT. It is not an endorsement of Walmart as an economic driver in rural areas. Moreover, the study doesn't assume that Walmart itself is responsible for business growth. "Obviously, there is a reason Walmart chooses a town to begin with - population, centrality, and more," says Schwartau. "Some of these towns may have been on their way up before Walmart came to town."

Della Schmidt has had some good experiences with the retail giant. "I've found Walmart tends to be a pretty good citizen. They have a policy to maintain a Chamber membership in every town they are in. Few corporations have that policy and many have just the opposite. Each Walmart store also has a review committee for donations of products, and sometimes they send staff out as volunteers. They also have some community match and grant activities."

Other towns have resisted the big box trend, and still others haven't drawn much interest from big-box retail. "Our work is about helping communities pursue informed economic development options," notes Matt Kane, Program Leader for Extension's Community Economics team. "Walmart Supercenters do indeed open and exist in Greater Minnesota. Knowing what to expect when Walmart comes to town informs local leaders, economic development organizations and the business community about likely developments and options for retail and services in the shadow of a Walmart."

What about neighboring towns?

Before studying the effects of Walmart on their home communities, Bruce Schwartau and fellow educator Neil Linscheid studied the sales impact of Walmart on neighboring communities in Minnesota.

They learned that neighboring communities in Walmart counties suffered retail sale declines of 30 to 50 percent. But surprisingly, there was not a strong negative effect on sales in contiguous counties. "There was an immediate pull to Walmart communities and away from surrounding towns in the county," says Schwartau." But that seems to recover and level off after five years at a new, slightly lower sales 'normal'.

The news about the counties around the Walmart county surprised us. There didn't seem to be a large negative effect. This finding was unexpected after reviewing research conducted in Iowa and Kansas. It could be that Minnesota consumers have a number of close retail options, and so don't tend to drive longer distances to visit Walmart."

* Note: An earlier version of this article described health care and personal stores as "number four on the list." This actually referred to NAICS code data rather than the business types in the chart provided, thus creating some confusion for readers. The article was edited for clarity.