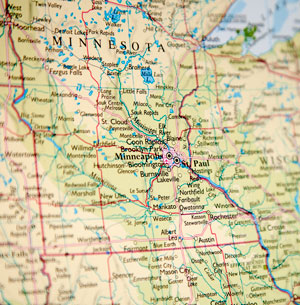 While agriculture and mining are still important, Greater Minnesota is now a richer blend of economic interests and opportunities. That's the biggest thing Extension Economic Analyst Brigid Tuck and her team of Extension educators saw when they set out to describe the economic composition of Greater Minnesota - its economic drivers, strengths and concerns.

Using the geographic boundaries of the Regional Development Commissions, Tuck and her team applied various measures to understand economic strengths two ways - both by industry outputs and employment. To help local economic development leaders think about the future, she also analyzed two key industries in each region and explored their interactions with other local business. This provides insight into business-to-business transactions that are already happening in an economy, and also points out where opportunities may exist. (For example, could nursing and residential care facilities depend more on local wholesale trade for purchases?)

Vital Connections editor Joyce Hoelting asked Tuck to take some time to reflect on the study and its findings. (Note to readers: You can find the 2019 update to this study, along with an interactive map, at z.umn.edu/economiccomposition).

Why did you decide to study Greater Minnesota's economy in so much detail?

You studied both industry outputs and employment. Why are these different measures?

They are different measures because the ratio between goods and services produced and the number of jobs created differs a great deal by industry. Agriculture is the perfect example. Technology has created great efficiencies in agriculture, which has decreased the number of jobs that are created in relation to the goods that are produced. Inversely, "high-touch" industries such as nursing create far less output with high employment rates.

How diverse is Greater Minnesota's economy?

Well, no one could argue that this is our grandparents' Greater Minnesota. While there is still a strong agricultural industry in Greater Minnesota, there is also a thriving manufacturing industry and there are robust professional and business services. And other regions bring other economic strengths to our state.

Which industry would you say is number one?

Well, manufacturing and professional and business services are top industries in each of the 12 regions we studied. Manufacturing is the number one source of output in seven of the 12 Greater Minnesota regions. And while manufacturing was hard hit during the recession, Greater Minnesota fared pretty well. It retained 14,000 jobs that could have been lost if it had performed similarly to the rest of the nation.

But professional and business services are really gaining strength. These are the businesses that specialize in performing professional, scientific, and technical activities for others - like accounting or engineering. This industry actually increased its number of jobs by 27,000 from 2003 to 2013. That's a 17 percent increase, compared to a 10 percent increase in the Twin Cities, albeit from a greater number of jobs to begin with. A lot of this increase was driven by temporary jobs, but there is viable hope that those temporary jobs will lead to permanent jobs in the future - if they haven't already.

Ag is one of the three major industries in half of the 12 regions that we studied. To find ag, look west. The entire western tier of the state has a strong agricultural industry. And agriculture-related jobs grew by 33 percent in the period from 2003 to 2013 because ag performed well during the recession. Our state was lucky to have a thriving agricultural industry during tough times.

So what industries are in Greater Minnesota beyond "the big three"?

We definitely shouldn't overlook the contributions of industries beyond the big three. Take health care, for instance. It's playing an increasingly critical role in our economy. There was an increase of around 41,000 jobs in health care during the period I studied. That makes it the fastest-growing industry in Greater Minnesota.

There is also a lot of diversity in terms of regional output. We have mining in Northeast Minnesota. Health care is big in the Southeast. In Central and North Central Minnesota, trade (both retail and wholesale) are big. In the East Central and Headwaters areas - where Minnesota's tribal reservations are - government is in the top three.

When it comes to employment, the top three industries constitute in the range of about 43 to about 70 percent of jobs in each region. That diversity makes regions more resilient when industries boom and bust. And in some areas, it's impossible to name a "top three," because four or five industries share pieces of the pie.

So, let's get more specific. Within these strong industries, what types of businesses perform especially well?

In manufacturing, machinery and fabricated metal products are performing well - and these sectors performed well even during the recession. Food manufacturing is still a major generator of jobs and is the number one source of manufacturing jobs in six regions. In the professional and business services industry, the sector of note is businesses that manage other companies or enterprises.

But, there again, Greater Minnesota has great diversity, so different regions of the state have different sectors that are strong.

Job losses in retail trade were really tough. In most areas of Greater Minnesota, job losses were even higher than what would have been expected, given national trends. Of even greater concern, wages were stagnant or decreased in relation to cost-of-living.

What do you hope comes from a heightened focus on Greater Minnesota?

I hope the state comes to the understanding that both rural and urban Minnesota need each other. In 2011, we took a look at what would happen to urban Minnesota if Greater Minnesota dropped off the map. One of our findings was that a $1 billion decrease in manufacturing output in rural Minnesota would result in 1,043 jobs lost in the Twin Cities area, as well as a loss of nearly $208 million in economic activity.

The strength of the agricultural and health care sectors in Greater Minnesota certainly buoyed the state during the Great Recession. So paying attention to the needs of Greater Minnesota makes sense. Every industry, and every part of the state, is going to have booms and busts. That's why our diversity is our strength.

What about the Twin Cities Area?

Interested in learning about the 16-county economic region of the Twin Cities, read a report from the Center for Urban and Regional Affairs on Assessing Minneapolis–St. Paul’s Regional Economic Competitiveness: An Analysis of Industry Clusters.

Funding: EDA Center at the University of Minnesota Crookston