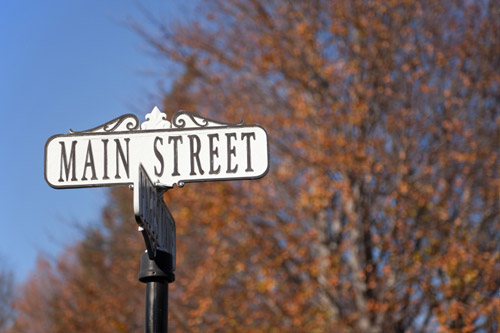 Everybody seems to love lists. But are they useful? The authors of a recent study by the University of Minnesota Center for Urban and Regional Affairs (CURA) believe theirs is.

The hierarchy incorporates several kinds of data and seeks to measure and rank the economic vitality of Greater Minnesota communities. The list—and study behind it—are also intended to help public and private policymakers at the state and local level set priorities and decide where to invest resources for the benefit of Greater Minnesota towns.

The study looks at goods and services available to consumers outside the metro area. "Most products can be purchased close to home, but rural Minnesota residents will need to take trips to larger communities to get some of the things they need," Schwartau says. "We wanted to examine all that and compile the data in a way that would be helpful to anyone interested in the economic health of non-metro communities."

In this case, "anyone" might include state highway planners who could use data like this to set priorities for state road projects. And local communities could use this data to develop business retention and expansion strategies.

Schwartau issues a caution before diving into the numbers, though. "Communities shouldn't fixate on the list, or get discouraged or smug about their ranking. The idea is to provide information that local communities can tap as they decide how to sustain or improve their economies."

The first CURA study of Greater Minnesota cities in the 1960s relied on a complex system of counting the number and types of retail and wholesale businesses. CURA updated that study in 1989 and again in 1999—still relying on business counts, but expanding beyond the wholesale and retail trade to include construction, manufacturing, services, and other industrial categories.

The 1989 study also introduced the current naming convention for trade centers: Level 1, primary regional, is the highest, while Level 7, hamlet, is the lowest. Data from Dun & Bradstreet were used in both the 1989 and 1999 studies to count businesses. Population counts were added to sharpen the classification system. Businesses were located by zip code. This analysis was time consuming and costly, and the details were complex and sometimes confusing to readers.

That's why, for the recent study, Schwartau and Craig moved to a simpler approach based on sales-tax data. First they tested the comparability of sales-tax results with those of the earlier studies as a method for determining the trade-center level. Then they applied the most recent sales-tax data (from the Minnesota Department of Revenue) to determine what changes had taken place in the trade-center hierarchy.

The authors chose sales-tax data as a measure of economic vitality despite the exemption of some items from the Minnesota sales tax, such as clothing and groceries. Those exemptions were just one reason Schwartau and Craig did such a careful analysis of the relationships between earlier trade center classes and taxable sales—both observational and statistical.

"The results were robust, and we found that taxable retail and services were good measures of trade-center level," Craig says. In addition, the authors believe their system is easy to understand and adjust for many uses.

Mankato moves up; others move down

The new system demonstrated a few changes since the 1999 study, with the most notable being the addition of Mankato as a Level 1 trade center — joining Rochester, Duluth, and St. Cloud in that category. Mankato experienced a 45 percent growth in sales over approximately 10 years — from $623 million in 1998 to $904 million in 2009. This makes Mankato the major shopping destination for all of south-central Minnesota.

Some of the authors' findings describe the effect of demographics and geography on evolving trade patterns. They are:

Other findings offer new information or are contrary to some stereotypes. These are:

The study also reveals some intriguing details, such as the effect of big box stores on small-town economies. The common perception is that big-box stores destroy a small town's retail economy, but Schwartau believes the opposite might be true.

"A big box store will change the way local stores do things — they may need to change their product mix, for example," he says. "But for a town's economy as a whole, a big box store doesn't have to be a death knell."

To the contrary, a big-box store can increase a town's "pull factor" — its ability to attract consumers based on its population and statewide average expenditures. For example, Fairmont's pull factor has increased since a Wal-Mart opened there in 2007.

On the other hand, Fairmont loses some local sales because it doesn't have a building materials supplier, and people leave town to buy building materials at the Home Depot in Mankato. Once they get there, they're more likely to shop for other things as well.

Because of their findings, Schwartau and Craig are expanding their analysis to include more Greater Minnesota communities with populations between 2,000 and 5,000, at levels 4 and 5. They expect to release that study later this year. Before moving on, however, they offered some key advice.

"We believe that individual cities can use our data and analyses to take charge of their own futures," Schwartau says. "Just because a city is positioned at Level 4 where the long-term trend is downward, it is not doomed to oblivion. Cities need to take the lead themselves, but help is available from a number of sources."

Craig offers a similar message to Greater Minnesota cities: "You control your own destiny, so get busy. If you want your town to go someplace, there are tools to do that.

The study authors also recommend the community economics programs available through Extension, including:

* Many cities are missing from levels 3 to 5 because of a lack of data. Many more cities are at these levels.

Bruce Schwartau and Will Craig