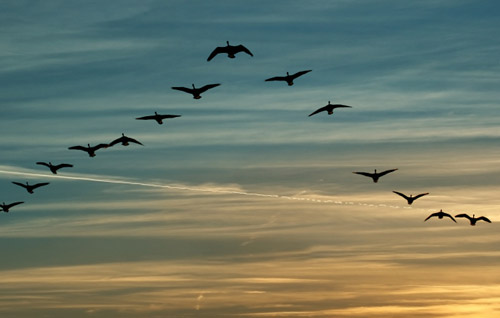 "I've always thought being a good follower is as important as being a good leader," says Holly Anderson. "They're both part of a team, and teamwork is how you get things done in a community."

Anderson and her husband, Bill, are active in the Crookston community, where they lead Special Olympics activities and serve on various boards and committees. They are 2012 graduates of the Red River Valley Emerging Leadership Program (ELP), coordinated by Extension educator Jody Horntvedt.

Horntvedt, and her colleagues in the Center for Community Vitality, wholeheartedly agree with Anderson's observation. Through research and experience in the field, they have learned that followers are just as important as leaders in creating successful communities.

"Leadership and followership are two sides of the same coin," says Denise Trudeau-Poskas, Extension specialist in Community Leadership Development with the center. "Communities need both leaders and followers if they're going to meet the incredible challenges they face today."

"Leaders can't do it all," Horntvedt adds. "They need to work with others — with followers — to help them accomplish goals. They might even need to step aside and let followers take over their leadership positions so they can refresh and recharge in order to lead most effectively."

Given all this, it's puzzling that followers often get a bad rap in popular culture. If they're not being labeled "sheep" or "yes men," they're being ignored.

That's a shame, Trudeau says, especially since the idea that all followers blindly follow orders without question (behavior associated with sheep) is a "huge myth." What's more, although it may sound unflattering, everyone needs to conform at times and simply follow instructions. Otherwise, nothing would work.

Experts call this technical following. "We need technical followers at the airport, or no one would line up to board the plane," Trudeau says. "But in most cases we need true followers — people who are courageous, empowered and active in their organizations and communities."

Despite this, both academic and popular literature, as well as the leadership programs they inspire, have traditionally emphasized leadership over followership. So why would that be, given that there are no leaders without followers?

Some of the negative perception of followers has roots in reality. Followers can indeed be passive ("sheep"), or conformist ("yes men"), or alienated ("cynics") — these are types of followers identified by Robert Kelley in his groundbreaking 1988 article in the Harvard Business Review, "In Praise of Followers." Kelley believes these three types of followers are less effective, and sometimes counter-productive, in getting things done well.

But Kelley also describes effective followers and their characteristics:

In her work with ELP participants and other constituents, Horntvedt addresses the need for followers to develop Kelley's four characteristics and the need for leaders to support the efforts of their followers.

For example, leaders should encourage independent thinking and speaking out - otherwise they will indeed be surrounded by "yes men" (and women). Leaders also should keep followers informed and delegate responsibilities to them, so they gain skills and experience if they want to take a leadership position some day.

Everyone doesn't have to aspire to a leadership position or want an official title, experts say. "Everyone should understand, however, that followers also have important roles and responsibilities that often look like leadership," Horntvedt says.

In her work in communities, Horntvedt reminds people of a leader's obligation to fulfill the four needs of followers identified by Tom Rath in his book, StrengthsFinder 2.0: Trust, Compassion, Stability, and Hope. This means effective leaders build trust, show compassion, provide stability, and create hope.

Cindy Keller of Fergus Falls, a 2012 ELP graduate with her husband Leon, emphasizes the importance of building trust by showing respect.

In her experience, she says, "one critical difference between effective versus ineffective groups is a foundation of respect. Groups accomplish this by recognizing and valuing the unique strengths of each individual." This is the kind of trust-building behavior leaders must model to followers for groups to be successful.

Horntvedt further emphasizes the fluid nature of the relationship between leaders and followers. People are not always one or the other, she notes. Their titles may stay the same, but sometimes they switch roles - depending on the situation.

"We all have to recognize when to lead and when to follow," Horntvedt says. "It's the metaphor of dance. Sometimes you lead, and sometimes you follow. It's the interplay between the two."

So what's the price of leaders forgetting about followers? Or followers relinquishing their responsibilities? For one thing, it's a waste of human potential, Trudeau says. Individuals lose out, as does the entire community.

Failures of leadership and followership can have other serious consequences. Projects or initiatives launched without the input or feedback of the people they will affect may never get going. Or they may stall. Or even if they're accomplished, they may not be sustained.

"You might not get everybody's buy-in upfront, but you need their perspective during the decision-making process, and you'll need their support long-term," Trudeau says. "Communities that don't engage followers get stagnant. Volunteers burn out, and projects fail."

If communities need more convincing about the importance of supporting and listening to followers, they would do well to look to the world. Followers have always been important, but they're becoming more so in the 21st century.

Author and Harvard University lecturer Barbara Kellerman talked about global trends in a 2012 commencement speech to graduates of the prestigious business school at the University of St. Gallen in the Swiss city of that name. Her remarks nicely sum up the new realities for organizations and communities everywhere:

"Followers . . . are more important now than ever before . . . Ordinary people are louder and noisier, more strident, more critical, more, if you will, democratic in their expectations. Traditional patriarchal family structures have been turned on their heads. Totalitarian and even authoritarian governments have been reduced to an increasingly dwindling number.

"Workplace structures, previously hierarchies, have been flattened. And social media give everyone a platform from which they can, if they want, have their say. Life, in other words, has changed — changed from being something of a spectator sport to a game in which everyone wants, and increasingly expects, a piece of the action."

Trudeau believes the global trends reinforce the need for a disciplined approach to followership development. "In a culture where followers are growing more empowered, conversations about effective followership should be happening every day, because — for followers, as well as leaders — change comes with action and responsibility. Engaged followers are essential if communities and organizations are to act with purpose" she says.