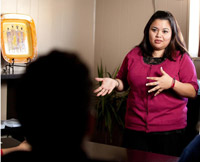 Politicians and corporations are now realizing they may not be able to succeed unless they understand what's in the hearts and on the minds of the burgeoning Latino population in America.

But this isn't news to many communities in Minnesota with growing Latino populations. As we reported in a past issue of Vital Connections, rural leaders are intentionally reaching out to new immigrants. Learning about community leadership together has moved Latino residents to become more involved as community members and leaders — working together for the future of their towns and regions.

The researchers conducted interviews in four Minnesota towns. In each of these towns, the Latino population had at least doubled — even tripled or quadrupled — in the past 20 years. Interviewees represented three sectors important to community vitality — public, private and non-profit. Those interviewed were identified as formal or informal leaders or people in the know. About half were Latino and half were White.

What makes Latinos different when it comes to community life and leadership? Do they have different views?

Yes and no. Like those residents who have been here for generations, Latinos care deeply about their communities — especially how the community will raise the next generation. But our research also came to understand that Latino residents look at leadership differently than Anglo leaders. The term "leader" wasn't used often when we interviewed Latino residents. Latinos are most energized by just being able to work together to do things that make a difference. Latinos don't even really see themselves as "volunteers." They just respond to the opportunity to help out.

Because Latinos have a close-knit community, they especially need and value working with others from the Latino community. From those relationships, they get peer support and rewards from working together to make a difference.

So role models are important to Latino leaders?

They are hugely important. A phrase we kept hearing from current Latino leaders was "I've had a great mentor." Mentors who guide and support new Latino leaders are going to leave a great legacy across Minnesota. And we heard that mentors are coming both from within the Latino and Anglo communities.

Of course, Anglo leaders said that mentors were important to them, too. So this is a need that Anglo and Latino emerging leaders share.

If that's how Latinos begin to see themselves as leaders, what helps others see them as leaders?

Interesting question. Latino leaders talked about becoming "that bridge between the two communities." Latino leaders were recognized as leaders by others typically after they spent time in the community working as paid translators or connectors between the Latino and Anglo community. Language skills obviously are important to this, but it's also about developing key relationships in both communities, and understanding what is important to both.

What is your advice to individuals who want to help Latinos become a stronger part of a community or region?

First, recognize that there are cultural differences. Taking time to build a relationship is key to understanding and appreciating those differences.

Also, remember that there are a variety of entry points to leadership. You might want to start with just asking Latino residents to come and help out with an event or a project. Latinos might prefer to lead informally rather than taking on a pre-structured role or a formal, long-term leadership commitment.

For those who are thinking about developing leadership through a formal program, you really have to work closely with residents to consider options and design the program. Delivering something that was previously designed for other groups may not fly. When we designed the Integrative Leadership Program in Southwest Minnesota, for example, we discovered an opportunity to use the program to build relationships between Anglo and Latino leaders by bringing them into the same program. It also helped to focus on key community issues that both groups cared about such as education, health care and personal safety.

Also, remember that to be credible, information should come from sources the community understands and trusts. This involves familiar language, people, institutions and media. We all respond more positively when we are asked to help by people we trust and understand, but this is even more important for newly immigrated communities.

My final word of advice would be to remember how very important it is to keep reaching out. The future of our communities requires all hands on deck. When Latinos don't participate, some may assume that they don't care. Overcoming that assumption is key to unlocking a new generation of community leadership.