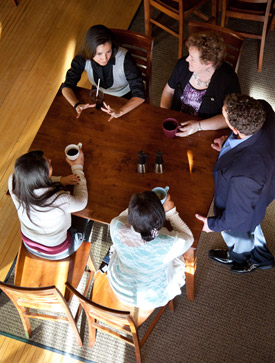 In communities across Greater Minnesota, graduates of Extension's leadership education programs are stepping up to make a difference in the places where they live and work. As they step up, these emerging leaders are also making a choice about how they will lead in their communities.

"Communities will always have a need for more leadership," says former leadership and civic engagement educator Lori Rothstein, "and being intentional about how you choose to lead is important." Extension's leadership cohorts give participants an opportunity to reflect on personal strengths and realize where—and how—they can best lead.

While some leaders may choose to scale back their leadership commitments to have a bigger impact in fewer areas, others may decide to take on additional leadership roles or focus on becoming a better follower. All types of leadership are important, and they can all bring valuable energy and vitality to Greater Minnesota communities.

Here's how three recent leadership program graduates chose to lead in their communities.

For Anastasia Mickelson of Frazee, Minnesota, a 2014 graduate of Extension's Emerging Leadership Program, choosing how to lead in her community meant stepping outside her comfort zone to become a director on the 2016 Becker County Fairboard. The stay-at-home mom had only previously served on her children's local swim board and was hesitant at first. But Mickelson decided to stretch herself, as well as her blossoming leadership skills.

The first project she organized was a fair beautification project. "Our fairgrounds needed some care," Mickelson says, "so I got the local 4-H groups involved, and they're planting flower beds, making benches, and painting."

Her leadership role gave her the confidence to challenge existing decision-making processes. If she sees an opportunity for her board to seek more input from others, she'll encourage them to consider these different points of view. "I try to find the balance between being respectful while still encouraging new ideas and ways of doing things," she says. "Taking on this leadership role and learning how to better facilitate decision-making processes has given me confidence I didn't know I had."

When less is more

After giving birth to twin boys last fall, Claire Meyers of Morgan, Minnesota decided to scale back on the number of leadership roles she took on, focusing instead on making a bigger impact. Rather than serving on multiple boards at once, she now focuses on one she's particularly passionate about.

A graduate of Extension's leadership program in Brown County where she works, Meyers wanted to create a similar program in the county where she lives. So now, she leads the initiative to create a leadership education cohort in Redwood County. "This opportunity aligns with my goals and my passion to develop leaders and empower others," she says. "I feel like this is my chance to take all the leadership skills I've learned and put them to the test."

For Meyers, taking a step back allowed her to pursue a leadership role that will directly impact her community by inspiring more people to lead. "For a long time, I was just really flattered to be asked to lead something," she says. "Now I look at what I have to give. I think I've definitely matured as a leader in that way."

Aside from a positional leadership role, people can also lead by deciding to become a better follower. A good follower asks focused, empowering questions that help leaders and groups make more informed decisions, explains Rothstein. "Good followership means not just sitting back and letting things happen, but asking good questions and fine-tuning the direction the leader or group is going," explains Rothstein. "It helps groups learn how someone else may approach a challenge or opportunity."

Margaret Palan, a 2015 graduate of Extension's U-Lead Advisory Academy (ULAA), chose to become a better follower within her position at Western Community Action in Marshall, Minnesota. As part of the community action team, she is very intentional about making sure everyone has an opportunity to speak during a decision-making process. "I try to involve everyone and make them feel like what they say matters," she says. "I love being a cheerleader and champion for others."

Aside from facilitating effective decision-making processes, Palan also focuses on strengthening her questioning skills. "Before starting a project," she says, "I try to do an overall assessment and ask questions that clarify what is expected of me and what the scope of the work is."

The call for more leaders

According to an analysis by Extension research fellow Ben Winchester, 1 in 16 people must serve as a leader in rural Minnesota counties. A nearly 8 percent increase in the state population between 2000 and 2010, and a 19.3% increase in the number of nonprofits, drives this need. "There was a time I thought we had too many leadership programs," Winchester says, "but now I think we don't have nearly enough."

As more community members choose to lead, rural Minnesota will benefit from more leadership energy—and that makes a difference.

Being intentional about focusing on the right type of leadership role is key. "You know when it's the right fit," Mickelson says, "because it excites you and lights you up."