Pork production is a key component of Minnesota’s agriculture industry with $2.7 billion in annual hog sales in 2019, but this economic engine is being severely challenged. Significant COVID-19 infection rates forced closures and reduced operations in USDA-approved meat packing plants.

University of Minnesota Extension researchers Brigid Tuck, Joleen Hadrich and Megan Roberts say in a recent study, The role of hog farmers in Minnesota’s rural economy (pdf), that reduced packer capacity meant there was no market for 45 percent of hogs during one sampled week last spring. Many producers were forced to look at other options, even the option of euthanizing animals on the farm.

“The decision to put down animals created significant mental and physical stress. I could see it in producers’ eyes and hear it in their voices,” says David Preisler, chief executive officer of the Minnesota Pork Producers Association and Minnesota Pork Board.

Some farmers were able to find alternative markets for their pigs, but the number of animals ready for market was significantly higher than what packing plants could handle because of COVID-19.

Todd Selvik is a pork producer from the Waseca area and farms with his father, uncle and a cousin. The families, their employees and their veterinarian agonized for weeks last May over the decision to euthanize hundreds of market-ready pigs.

“We didn’t get much sleep,” he says. “It’s hard for people outside of farming to understand the personal nature of putting down animals that you’ve raised and cared for since they were young and they are not being used for their intended purpose.”

Selvik and his wife, Meghan, have three kids who were distance learning while their school was closed and Meghan says the kids could feel the tension at home. “It was hard knowing pigs were being euthanized that could have gone to feed families,” she says.

Preisler says the packing plant struggles came on top of a recent period of lower prices being paid to farmers for their pigs. “When the plants closed, some farmers just called it quits,” he says. The Extension study says an average hog farm in the state generates $1.5 million in economic activity. The interruption in hog processing resulted in reduced spending by farmers on local good and services, which hurts the local economy.

Ideas from scientists and educators helped

Extension’s swine team suggested research-based ideas, including adjustments to diet and environment that slow the growth of pigs, buying more time before the animals needed to be processed.

“We are concerned about it happening again,” says Selvik, adding that some changes were made in the family’s hog business that will allow it to adapt better should packers be forced to reduce or halt operations in the future.

Although the study did not look at reduced spending by meat plant workers, Extension family resiliency educators were there for the families of workers who were unemployed. Jose Lamas, Latino financial literacy educator, and Conchita Paez-Sievert and Leticia Rodriguez, SNAP-Ed educators, are all based in Worthington and helped those families through the time of suddenly reduced income on top of illness. 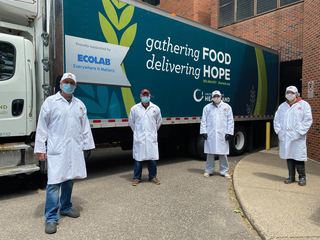 The Minnesota Pork Board and the University of Minnesota teamed up to provide ground pork for families in need. Nearly 12,300 pounds of ground pork have been donated to Second Harvest Heartland.

“We have had trained, essential volunteers help, using all of the safety procedures for operating during a pandemic,” says Ryan Cox, Extension meat specialist and associate professor in the Department of Animal Science.

“We are very grateful to Minnesota’s pork-producing families, the Minnesota Pork Board and to our volunteers who came through with as much good as possible from a devastating situation.”

Ups and downs in poultry and dairy economy

The same trio of Extension researchers who studied pork in Minnesota’s economy are looking at other livestock contributions.  Megan Roberts, Joleen Hadrich and Brigid Tuck prepared reports on the role of dairy farmers and poultry farmers (pdfs) in Minnesota’s rural economy.

Minnesota leads the nation in turkey production and contributes to Minnesota’s economy to the tune of $2.3 million per turkey farm. Each of 600 turkey farms supports six jobs on average. Kandiyohi, Stearns and Morrison counties lead the state in turkey production. Farmers produce about 40 million turkeys, 63.9 broiler chickens; laying hens produce 3.2 billion eggs. There are 4,175 poultry and egg farms in Minnesota.

Since retail turkey demand increases closer to Thanksgiving, growers escaped some volatility, but with many event and festival cancellations there were still losses.

For dairy, they noted a 40 percent drop in prices in the first quarter of 2020 through late April. They found the average contribution of a Minnesota dairy farm to the state’s economic activity is approximately $1.6 million. Minnesota has 2,456 dairy farms, with 200 head of cattle on average. Stearns, Morrison and Winona counties lead in Minnesota’s dairy production.

Regions with strong concentrations of livestock farms rely upon them through the support of local businesses, including feed mills, veterinarians and other suppliers.