Insects infesting stored foods such as flour, cereal and other dried goods, is one of the most common household insect problems. The many different kinds of insects that infest dried foods are often called "pantry pests."

Most dried food products can be infested by insects

Other items that may be infested include birdseed, dry pet food, ornamental corn, dried flowers and plants, garden seeds, potpourri and rodent baits.

Pantry pests are most likely to infest products that have been opened but they also can get into unopened paper, thin cardboard, and plastic, foil or cellophane-wrapped packages. They may chew their way into packages or crawl in through folds and seams.

Insects inside an infested package multiply and can spread to other stored foods not only in the same area but in other rooms in a home.

All insect stages (egg, larva, pupa, and adult) may be present at the same time in infested products.

Where do they come from?

Food products that are left in storage for a long time are prone to infestation. But foods of any age can become infested.

Washing areas with detergents, ammonia, or bleach will not prevent insect infestation. There is no evidence that placing bay leaves or sticks of spearmint gum in a cupboard will prevent or get rid of stored food insect pests.

Signs you may have a problem:

Not all small beetles or moths found indoors are pantry pests. If there is not a direct association with food, be sure the insects are identified correctly by an expert to determine whether they are a stored product food insect.

When you know a stored product problem is present, be sure to examine all susceptible food as there could be more than one infested source. When inspecting, look at the top surface of products with a flashlight or pour the package contents onto a cookie sheet.

When you find food that is infested, throw it away.

Washing shelves with detergent, bleach, ammonia, or disinfectants will not keep pantry pests from returning and could be dangerous if the chemicals come in contact with food.

To prevent re-infestation, store foods in sealable glass, metal, or heavy plastic containers or in the freezer or refrigerator until you are sure the infestation is gone.

If insects are infesting ornaments or decorations made with plant products or seeds, place the items in a freezer for at least four days.

How to identify common pantry pests 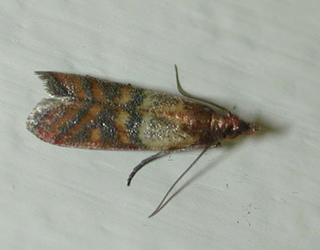 Plodia interpunctella are the most common moths infesting food in homes. These moths have a wingspan of 1/2 to 5/8 inch. When at rest, they fold their wings behind themselves, over their bodies. The base of the front wing is pale gray or tan and the rest is reddish-brown with a coppery luster. The wing markings are distinctive, but may be less clear if the scales have been rubbed from the wings.

Indianmeal moths may be found inside infested products or flying around homes. The larvae are whitish worms with shades of yellow, pink, green or brown and grow to 1/2 inch long. Only the larvae feed in stored products, which can be any dry stored food or whole grain. Foods infested with these insects will have silk webbing present on the surface of the product.

Larvae often leave the food when mature and may move long distances before spinning a cocoon. It is common to find caterpillars and cocoons on ceilings and walls. Adult moths may be seen up to several weeks after the food source has been removed. 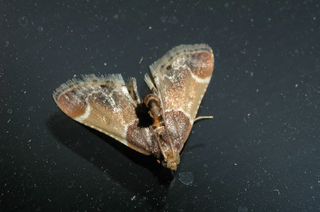 Pyralis farinalis have a wingspan of about 3/4-1 inch. Their forewings have a dark reddish-brown band across the top and bottom of the wings with an olive or yellowish-green band, outlined by wavy white lines in the center. Their abdomen is curved up at a 90-degree angle when at rest.

Larvae have a black head and whitish body with some orange at the end of the body.

Meal moths feed on a variety of flour and grain products and seeds. These moths are not common in homes. 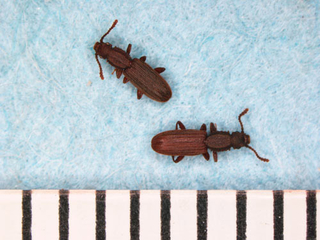 Oryzaephilus surinamensis are about 1/10 inch long, slender, flattened, and brownish-red to almost black. They are identified by the saw-like teeth on each side of the thorax.

Larvae are cream-colored, slender, and about 1/8 inch long.

They are found in many different food items, including dried fruit, cereals, nuts, dried meat, macaroni and seeds. 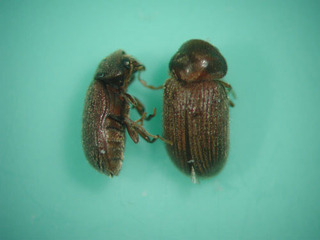 Lasioderma serricorne are about 1/8 inch long, oval, and brown. The head is bent down giving it a humped appearance. These beetles fly and can be found around windows.

Larvae are 1/8 inch long when mature, and yellowish-white with a light brown head. They have a curved body covered with fine hair.

Drugstore beetles feed on dried plant products such as spices, macaroni and other grain based foods, dried flowers, tobacco products and paper products, including books. 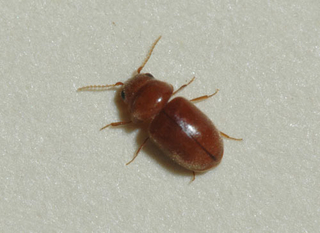 Stegobium panicum are similar to drugstore beetles. They are also 1/8 inch long, oval and brown with a head bent downward. They fly and are often found around windows.

Like the drugstore beetles, they feed on a large variety of dried plant products and have a curved body covered with fine hair. 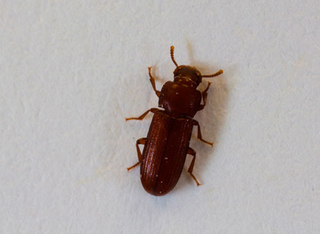 Tribolium confusum and T. castaneum are 3/16 inch long, reddish-brown, and elongate oval. Larvae are cylindrical, whitish, or cream-colored and up to 1/4 inch long and have two small pointed spines on the tail end. 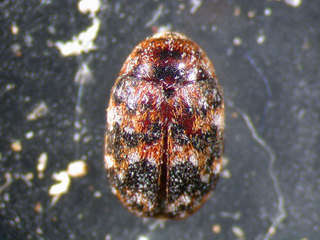 Trogoderma spp. are elongate oval and 1/8 to 3/16 inch long. They may be solid black or mottled with yellowish-brown markings.

Larvae are long and narrow, yellowish to dark brown, hairy and grow to about 1/4 inch. 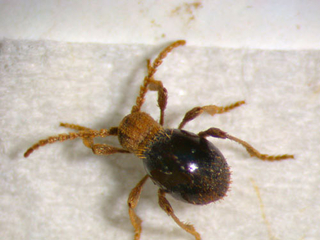 Family Ptinidae are reddish-brown, 3/16 inch beetles with long legs and a spider-like appearance. The larvae are C-shaped and whitish; they remain in infested material and aren't normally seen. 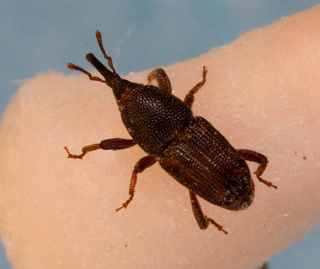 Sitophilus spp. are slender insects with a snout projecting forward from the head. They are dark brown, sometimes with four orange-ish spots on the wing covers, and less than 3/16 inch long.

Larvae are white, legless and wrinkled and only found inside whole kernels or seeds.

They eat only whole grains or seeds, leaving small round exit holes in infested kernels. They rarely are found in nuts, dried fruits, macaroni, and caked or crusted milled products such as flour. 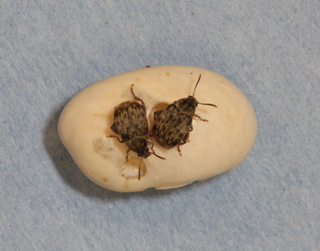 Acanthoscelides obtectus are a type of seed beetle. They are a mottled light and dark brown, broadly oval and about 1/8 inch long. They have short wing covers which expose part of the abdomen. Unlike other weevils, bean weevils do not have a conspicuous snout.

The larvae are small, whitish, legless and C-shaped.

They feed inside dried beans and peas.