Quick facts about phosphorus in Minnesota

Phosphorus (P) is essential for crop production. It stimulates early plant growth, giving it a healthy and vigorous start.

In Minnesota, most agricultural soils contain between 100 and about 4,000 pounds of total P per acre. Efficiently using this phosphorus is becoming more important due to economic and environmental concerns.

Phosphorus is an essential element that’s classified as a macronutrient because plants require relatively large amounts of P. Phosphorus is one of the three nutrients generally added to soil as fertilizer.

One of its main roles in living organisms is to transfer energy. Organic compounds that contain P transfer energy from one reaction to drive another reaction within cells. Adequate P availability for plants stimulates early plant growth and hastens maturity.

The P cycle is similar to several other mineral nutrient cycles because it exists in soils, minerals, living organisms and water.

Phosphorus serves a unique purpose, wherever it is in the cycle. Rain and weathering of rocks cause phosphate ions to release, which are then distributed in soils and water. Plants use the P to grow before getting eaten by animals and used for maintenance.

After the animal dies, the P returns to the soil. Bacteria in the soils may use the phosphorus to grow. The phosphorus can end up in waterways, from where it gets incorporated into sediments. 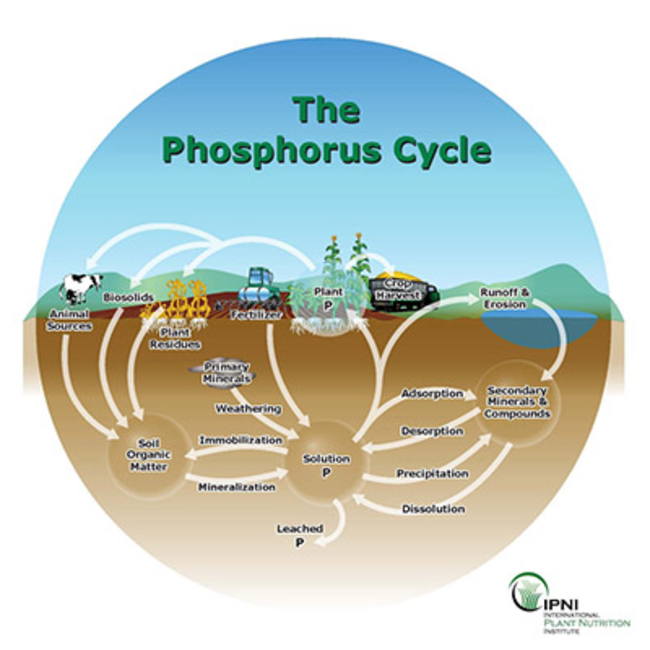 Forms of phosphorus in soils

Soils’ phosphorus (P) chemistry is very complex, and the P exists in many different forms.

However, in practical terms, think of P in soils as existing in three pools: The solution P, active P and fixed P pools.

The solution P pool is very small and usually contains less than a pound of P per acre. It’s mostly inorganic P. Plants take up P primarily in the orthophosphate form.

Solution P is important because it’s the pool from which plants take up P and is the only pool that has any measurable mobility.

The active pool is P in the solid phase that’s more readily released to the soil solution, which is the water surrounding soil particles.

As plants take up phosphate, the concentration of phosphate in the solution decreases and some phosphate from the active P pool is released. This is the main source of P available for crops.

The active P pool will contain:

Phosphate in this pool may remain in soils for years without becoming available to plants and may have very little impact on the soil’s fertility.

Phosphorus exists in soils in both organic and inorganic forms. Organic forms are found in humus and other organic material.

A process called mineralization – which occurs when microorganisms break down soil organic matter – releases the phosphorus in organic materials for plant uptake.

Although the microorganisms don’t directly break down organic phosphorus, they release phosphatase enzymes that are responsible for breaking organic P into the phosphate form, which is then used by plants for growth.

Soil temperature and soil moisture highly influence microorganism activity and the enzymes released. The process is most rapid when soils are warm and well-drained.

The phosphate in fertilizers and manure is initially quite soluble and available.

Most phosphate fertilizers are manufactured by treating rock phosphate with acid to make it more soluble. Manure contains soluble, organic and inorganic phosphate compounds that are highly available.

When fertilizer or manure phosphate contacts soil, various reactions begin occurring that make the phosphate less soluble and less available. The rates and products of these reactions depend on soil conditions such as:

To determine the need for supplemental P, soil tests are often used to estimate how much phosphate will be available for a crop. The two most common types of soil tests in Minnesota are:

Both the Bray-1 and Olsen soil tests are an availability index, which aim to estimate the amount of P from both the solution and active pools that the plant can use.

Calibration studies have correlated crop response to fertilizer additions in soils with various soil test levels of P. Using the calibration data, you can make recommendations about how much phosphate fertilizer will most likely give optimal yields.

Inorganic phosphorus occurs in a variety of combinations with iron, aluminum and calcium.

When P reacts with these elements, the products formed are not very soluble and the P in the insoluble product is considered fixed, or tied up. The solubility of the various inorganic P compounds directly impacts the availability of P for crop growth. The P solubility is highly related to soil pH (Figure 1).

Phosphorus that’s tied up isn’t measured by routine soil test procedures. Some P that’s tied up can be returned back to plant-available forms depending on the solubility of the phosphate compound formed in the soil.

As illustrated in Figure 1, when soil pH is between 4.8 and 5.5, the form of P is more reactive with aluminum in the soil. This form of P is tied up as aluminum phosphates that aren’t available to the plants.

Liming the soil can help increase P availability from iron- and aluminum-bound forms.

In general, P that’s tied up as calcium phosphates is a concern when the soil pH exceeds 7.3. Soils, if not limed, will become more acid over time. As pH decreases, the availability of P will change.

Calcium-bound forms of P vary in their solubility; here they are from most to least soluble:

Acidification to release calcium-bound P forms is not feasible in Minnesota. The most effective way to deal with the tie up of P in calcium-bound forms is to change the way P fertilizers are managed, such as through banding.

Soils throughout most of western Minnesota usually have natively low levels of available P because of the materials of the soils it’s formed in. Appropriately managing phosphate fertilizers is a major concern for these soils.

On the other hand, soils in southeastern, central and east-central Minnesota usually have a natively high level of available phosphorus. For these regions, phosphate usually is not needed in large quantities in any fertilizer program.

Mismanaging soil P can threaten water quality. While phosphorus in the soil solution is found in relatively low concentrations, soil particles can have a significant amount of active P that can cause environmental problems if runoff occurs.

These conditions can be very detrimental to aquatic life and limit the recreational use of lakes, such as for game fishing and other water activities.

Phosphorus is a somewhat unique pollutant in that it’s an essential element, has low solubility, and is not toxic itself, but may have detrimental effects on water quality at quite low concentrations.

Phosphorus typically is the limiting nutrient for algal growth in freshwater ecosystems. Adding P to fresh water increases algal growth. When algae die and begin to decompose, it creates anoxic conditions as O2 is depleted from the water in a process called eutrophication.

Because of eutrophication, there’s considerable concern about losing P from soils that gets transported to nearby streams and lakes. Several chemical properties of soil P have important implications for the potential loss of P to surface water.

In instances when sediment is a source of P to the water, eutrophication can potentially impair the water system. Responsible P management in agricultural and industrial systems can reduce potential negative impacts on the environment.