Boxelder bugs (Boisea trivittatus) are a nuisance because they enter homes and other buildings, often in large numbers. You might not notice them during summer, but they can become an issue when they try to move into homes during fall to find a warm place to hide for winter. 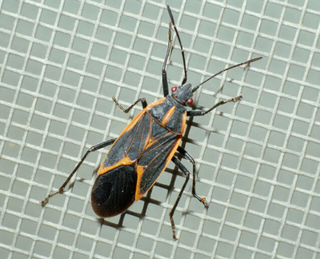 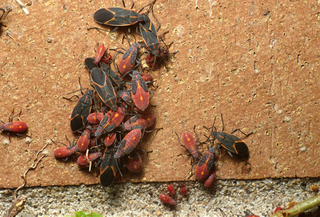 Boxelder bugs are "true bugs" and belong to the same family as stink bugs, cicadas and other insects with piercing and sucking mouthparts. They release a bad odor when crushed.

You can see bugs at all stages of development at any given time during the summer.

Boxelder bugs are not a serious problem every year. They are most abundant during hot, dry summers when followed by warm springs.

In Minnesota, boxelder bugs emerge during spring as the weather starts to warm up.

Adults feed on plants and seeds on the ground during spring and early summer. They begin mating a couple of weeks after they start feeding.

Starting in mid‑July, they move to female seed-bearing boxelder trees where they lay eggs on trunks, branches and leaves. They are rarely found on male boxelder trees.

Boxelder bugs may also feed on maple or ash trees. There is no noticeable feeding injury to these trees.

During years of high populations, you may find nymphs on the ground or in gardens feeding throughout the summer.

Boxelder bugs start to leave the trees where they were feeding to find protected areas for the winter. Adult boxelder bugs can fly several blocks, and may travel as far as two miles.

Although nymphs may be present in the fall, only fully grown adults survive the winter.

As they wake up, the insects follow the warmth into the home's living areas from where they’ve been hiding in walls or attics. Once there, they move towards windows and other sunny areas. However, warmth may not reach all of the insects and they do not all become active at the same time.

By spring, all the surviving boxelder bugs that overwintered inside buildings become active. They try to move outdoors but many remain trapped inside. They do not reproduce in homes. All the boxelder bugs seen inside during winter and spring entered buildings the previous fall.

Keeping boxelder bugs out of your home

The best way to manage boxelder bugs is to keep them from entering your home from the start.

The best way to manage boxelder bugs is prevention—keep them from entering your home from the start.

This is done by sealing possible entry points around the home so they are unable to enter plus using an insecticide at the right time.

Make repairs to openings they can get into before the end of August.

Once boxelder bugs are found inside the best option is to remove them with a vacuum or a broom and dust pan. It is not practical to try to treat wall voids and other hiding places to prevent them from emerging.

Since they don't live for very long, insecticides are not recommended once they have emerged into the inside of a home.

Boxelder trees, as well as maple and ash, are common in yards and public spaces and are potential sources of boxelder bugs. The benefits of having these trees in a landscape outweigh the problem of occasional infestations.

Spraying with insecticides or removing boxelder trees in your yard is not a good way to manage boxelder bugs. Adult boxelder bugs can fly up to a couple miles from their source of food so they don’t need to be near the trees in order to infest your house.

If large numbers of boxelder bugs are present or you have a history of boxelder bug invasions, you can supplement non-chemical control methods with an insecticide treatment around the outside of your home.

The best time to spray is late summer and early fall when boxelder bugs are first clustering around the outside of buildings.

When choosing a product to use look under “Directions For Use” for information that says the product can be used on the exterior or outside of buildings. This information is often in small print.

You can find the common name for an insecticide by looking for “Active Ingredients” on the label. Common names of active ingredients available to the public include:

An experienced pest control service has the necessary experience to successfully treat your home and may be the best option for the worst infestations.

During spring, you may see boxelder bugs on the outside of homes. These insects are coming out from where they spent the winter and are moving away from buildings.

It is unnecessary to spray these insects as they are not entering homes. Treating them does not have any impact on the number of boxelder bugs found the following fall.