By understanding how corn grows and develops, producers can more confidently assess crop damage, estimate if it will recover and apply herbicides and other crop inputs at the best time.

A corn plant’s growth stage is either part of the vegetative (V) or reproductive (R) periods.

The vegetative stage occurs between early May and early to mid-July. About 1,300 heat units (growing degree days) accumulate during this time period.

A growing degree day is a measure of heat accumulation calculated by subtracting 50 from the daily average temperature. It uses a base of 50 because very little, if any, corn growth occurs when the temperature is below 50 degrees Fahrenheit.

Temperature is one environmental parameter that drives plant growth. You can use heat units to predict important corn development events such as tasseling and maturity.

The photograph shows a young corn plant at the four-leaf stage (V4) that has been split. The growing point is a group of rapidly dividing cells that produce each new leaf from its base.

A new leaf forms approximately every four days until this group of cells begins to produce reproductive structures (ear and tassel). Usually 18 leaves form on each corn plant.

The growing point remains below the soil surface until after the five leaf collar (V5) stage. This protects the plant early in its development from frost and other damage.

When some portion of the uppermost leaves gets damaged or removed, leaves below the ear can, and do, fill the grain.

Grain yield per plant may reduce because of the damage to some leaves above the ear, but lower leaves can provide some sustenance to the filling grain. So minimal leaf loss will not greatly affect yield per plant.

The importance of leaves

Each corn leaf has three parts: The blade, collar and sheath.

The sheath is the leaf’s basal portion that wraps around the stalk, while the blade extends upward and outward from the stalk. The leaf collar is the transition structure between the sheath and the blade.

The leaf blade is the most important part of the leaf for intercepting sunlight. The blade points upward and gracefully arches over with its tip pointing downward when the blade is fully exposed.

Leaves intercept the sun’s physical energy and convert it into chemical energy that can be used by animals or in industrial processing. On young corn plants, leaves provide energy to the growing plant to develop new leaves, roots and reproductive structures.

At the five leaf collar (V5) stage, the growing point is located at the soil surface, yet it is protected by the new leaves which are in a tight whorl surrounding it.

Unlike the soybean plant, which can regrow from any of many axillary buds, the corn plant has only one primary growing point that leaves can emerge from.

If hail, freezing air temperatures or something else damages this tissue, there’s a poor chance of the plant remaining alive. If the plant lives, it will not significantly contribute to grain yield.

Breaking away from the stalk

These leaves ultimately die as they break away from the stalk. Five to six leaves normally slough from the stalk as the stalk enlarges in diameter. This sloughing of leaves occurs between the eight-leaf stage and the tasseling stage. At tasseling and throughout the grain filling period, plants have 12 to 13 leaves, half above the ear and half below.

After leaf number one with the rounded tip has sloughed from the plant, the plant's next lowest leaf will have a pointed tip. To determine the crop growth stage when the lower leaves are lost, one needs to split the stalk to determine the morphological leaf number of the lowest attached leaf. To do this, dig the plant and longitudinally split the stalk to view the nodes and internodes.

The darker bands across the stalk are nodes and the lighter stalk tissue between each band are internodes. All leaf sheaths are attached to nodes. Because the three lowest internodes do not elongate and are therefore not visible, the lower stalk area looks like one big node.

Continue counting upward to the highest leaf that’s arched over. That will be the number of leaves the plant has developed, and is the leaf stage number to identify the growth stage.

How to determine vegetative growth stage

The “collar visible” method of staging counts leaves, from the bottom up, with visible collars. As leaves grow and fully extend from the whorl, the collar becomes visible.

A V3 plant has three leaves with the collars showing and two or more leaves partially exposed above the third leaf.

The other staging method counts all leaves with tips of the leaves pointing downward.

When the tip points downward (arched over), at least half of that leaf’s leaf area will be exposed from the whorl. Starting with the lowermost leaf with the rounded tip, count upward to the uppermost leaf that has its tip pointing downward.

A V5 plant with this staging method has five leaves with the tip pointing downward, but the collars of the two uppermost leaves are not yet visible.

How this method is used

Some post-emergence herbicide labels describe growth stages for application timing. Growers should know which staging method was used so they can properly apply herbicide. Because of this, we use the hail method from this point forward to describe corn growth stages.

Reproductive (R) growth stages begin with fertilization of the floret (pollination) and end when the grain reaches its maximum dry weight. This later stage is called physiological maturity (PM). Grain moisture content is about 32 percent at PM.

We describe reproductive stages based on degrees of kernel development.

The R1 stage begins when silks become visible outside the husks. Pollination occurs soon after, when the falling pollen grains land on the silks. The R2 stage is the blister stage and begins 10 to 14 days after silking (C-8). R3, the milk stage, begins about 21 days after pollination.

In the R4 stage, kernels enter the dough stage, which begins 24 to 28 days after silking.

The kernel's milky inner fluid changes to a doughy consistency as starch accumulation continues in the endosperm. The shelled cob is now light red or pink.

By dough stage, four embryonic leaves have formed and the kernels have reached about 50 percent of their mature dry weight. Kernel moisture content is approximately 70 percent by R4.

In the R5 stage, 35 to 42 days after silking, all or nearly all of the kernels are denting near their crowns (all kernels have an indentation on the top of the kernel).

Just before the dent stage, the fifth (and last) embryonic leaf and lateral seminal roots form. Kernel moisture content at the beginning of the dent stage is approximately 55 percent.

A distinct horizontal line appears near the dent end of the kernel and slowly progresses to the tip end of the kernel over the next three weeks or so. Called the milk line, it marks the boundary between the maturing kernels’ liquid (milky) and solid (starchy) areas. 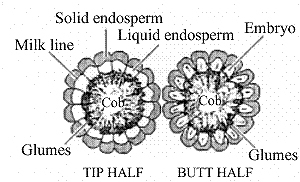 R6 is the mature stage and occurs 55 to 65 days after silking.

At this point, kernel dry weight usually reaches its maximum and kernels are said to be physiologically mature and safe from frost. Physiological maturity occurs shortly after the kernel milk line disappears and just before the kernel black layer forms at the tip of the kernels.

The time range for the reproductive stages varies because of differences in temperature, soil water availability, available soil nutrients and hybrid maturity.