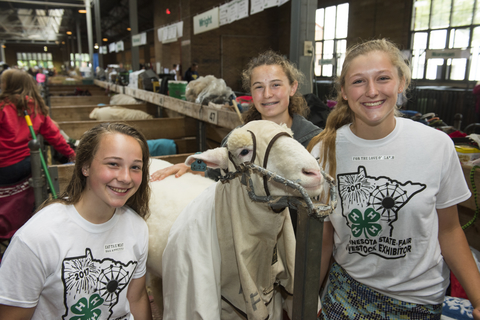 Extension's donors all have stories to tell about why they believe in Extension and how it has affected their lives.

Some give to further a program they are passionate about. Others give to honor a loved one who benefited from Extension opportunities. Still others value the work we do in their communities to promote healthy environments, gardens and local foods.

Dennis and Nancy Moeller, for instance, have planned an estate gift that will support 4-H youth development programs near Minnesota Native nations.

Here are a few more recent donor stories that explain why they chose to give to Extension.

David Werner has plenty of memories from the Minnesota State Fair. There was the first year he showed livestock as a 4-H’er. His pig, a Duroc gilt, got sick and David was so worried that he spent most of the fair sitting in his pig’s pen. Then there was the time, years later, as an adult chaperone, he was looking forward to sleeping in one Sunday morning after a grueling schedule of early morning and late nights with the livestock encampment. He was awakened by a young 4-H’er who was concerned that David would miss breakfast. He still laughs about that one.

David’s wife, Linda, has plenty of 4-H stories of her own. Like David, she got her start with 4-H as a kid in Pipestone County, and has participated in the state fair as a 4-H exhibitor and judge. So when the couple was considering ways to give back, University of Minnesota Extension 4-H was at the top of their list. “It’s just been a big part of our lives, a part of shaping who we are and who we’ve become,” says David, who later worked as an Extension educator, district director, and finally as chief financial officer.

After discussing different ways of giving back to 4-H, the Werners settled on the state fair. David says that he and Linda see the fair as a culmination of a year’s work and a place for 4-H’ers to demonstrate what they’ve learned. They hope that their giving will enhance the state fair experience, helping a new generation of 4-H’ers create their own state fair memories.

This year, funds from the David and Linda Werner Endowment for 4-H State Fair Experiences will be used for the first time. The endowment provides scholarships to help 4-H’ers who couldn’t otherwise afford to attend and showcase their work. It takes hard work and dedication to qualify to go to the fair as a 4-H’er, and the Werners want to make sure that youth don’t lose that opportunity because of financial hardship. The endowment will also provide help for financial emergencies that arise at the fair for youth, families, volunteers or staff. Sometimes, the unexpected happens, and it’s more difficult to deal with away from home.

The Werners’ goal is to help make sure every 4-H’er has a fabulous state fair experience.

"Treat all people the same, no matter where they live.”

He may already have over 75 years of involvement in 4-H youth development, but Jim Kemp is thinking about the future. “I want to continue to expose teenagers to leadership opportunities, whether they live outside Hutchinson or in downtown Minneapolis,” says Kemp, a retiree who has spent his life in public service.

“We want to empower young people to think about ways that they can solve the world’s problems,” says Jacquie Lonning, Extension 4-H citizenship and leadership program director. “But in order to do that they need to learn to work together, understanding diverse perspectives.”

Madison Muir is a University of Minnesota student from Hallock, Minn., who served as a 4-H State Ambassador. “It was exciting to go from developing those skills in my first year to using the skills to lead a team in my second year,” she says. “I also had a chance to meet with Jim Kemp and share my ideas with him about opportunities he could support to make the program even better.”

Interest in reaching beyond himself

Growing up on a dairy farm in Colorado, Kemp’s earliest projects included dairy, turkeys, sheep and pigs, but he also found passions for forestry, foods and health. With the guidance of a county educator, he started a dog training club for kids in a nearby suburb in order to reach out beyond the farms.

“All young people need to present themselves, speak, find information, assemble and organize,” Kemp says. After he developed leadership skills as a Colorado 4-H’er, he went to work for 4-H in Colorado, then Pennsylvania, Indiana and eventually Minnesota.

It was in Philadelphia where his interest in reaching out beyond the farms gained strength. “We would go to the row houses, where the bricks had tumbled down,” he says. “We hauled away the bricks and built gardens. We used any space we could. One was a triangle of soil between the row houses and the railroad tracks. Kids would give tours of their garden and the train would go by.”

It didn’t take long after he arrived in Minnesota before he was gathering kids from across Minneapolis and starting urban gardens in Theodore Wirth Park, helped by donations of seeds by local companies. It was just one of his many initiatives that reached young people through Extension 4-H. In 2009, after countless lives touched, Kemp was inducted into the National 4-H Hall of Fame.

Kemp’s commitment to 4-H will continue beyond his lifetime through the James C. Kemp 4-H Ambassador Endowment fund. In addition to his current gifts to his fund, he established four charitable gift annuities with the University of Minnesota Foundation, which pay him a fixed, guaranteed income for life. The remaining charitable gift annuity proceeds will benefit his endowment fund at the end of his lifetime.

Jean W. Bauer’s legacy of research and outreach with rural Minnesota families lives on thanks to funds contributed by Jean’s husband, Marvin Bauer, in her honor.

Jean was a faculty member and an Extension specialist in the Department of Family Social Science at the University of Minnesota College of Education and Human Development. The newest fund will create an endowment for research and teaching in family economics and policy by faculty with an Extension appointment in Jean’s former department.

Another fund, the Jean W. Bauer Fund in Family Financial Management, was created after Jean’s passing in 2012. It provides for Extension program initiatives in family financial literacy.

The new fund will ensure that Jean’s work helping families in Minnesota continues and grows through new research and education. Marv is confident that is what Jean would want. “She was dedicated to helping people, particularly in family resource management and economics, and taking research to the families of Minnesota,” he says.

As an Extension specialist, Jean led outreach and education programs in family resource management, including the development of Dollar Works, a nationally recognized Extension curriculum. Marv chose to include Extension work in the new college position because Extension was Jean’s passion and played a significant role in her career.

Everything was right at the University of Minnesota and Extension for Jean to develop and use her talents, Marv says. Her faculty position and her Extension appointment were two pieces of a whole that allowed her to research more effectively and use that research to serve the families of Minnesota.

Want to make a difference in people's lives? Give now to one of Extension's philanthropic funds, or contact one of our development officers.

Extension's development team is available to answer questions, identify volunteer opportunities, or guide you toward a giving opportunity that meets your philanthropic goals.