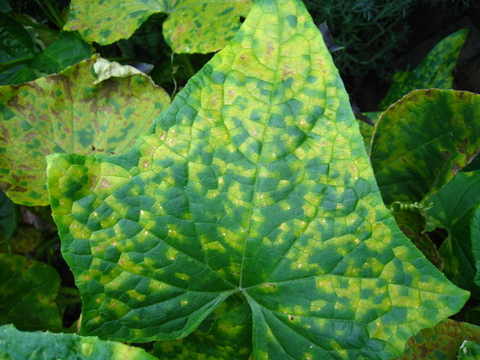 Downy Mildew, caused by Pseudoperonospora cubensis, is an oomycete that is not a true fungus. It thrives in wet or very humid conditions as a water mold.

Downy mildew can infect all cucurbits including cucumber, melon, pumpkin and squash.

Although it can be a problem in field, hoop house and greenhouse conditions, there have not been any reports of it in Minnesota. 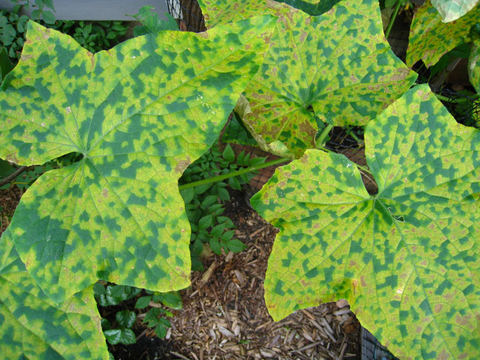 Downy mildew does not create viable oospores (thick-walled resting structures) that would allow it to survive Minnesota's harsh winter. It cannot survive on plant debris and only grows on living plant tissue. For downy mildew to occur in Minnesota, air currents must blow the spores.

In eastern states with similar conditions, downy mildew does not arrive until the end of the growing season, often in August. However, downy mildew has arrived in the Midwest earlier in the season. This early infection is possibly due to a change in the pathogen's biology or due to greenhouse production of cucurbits that allows the pathogen to overwinter on living plants.

Downy mildew can start an infection in a wide range of temperatures (41-86° F) but is most severe from 59-68° F. The pathogen needs moisture on the leaf surface in order to germinate and start a new infection.

Under humid conditions, downy mildew rapidly reproduces and spreads, resulting in severe crop damage. The pathogen can move on air currents, splashing water and on the tools and hands of workers.

There are several strains of downy mildew that attack different crops. It is possible to see a healthy pumpkin field alongside a severely diseased cucumber field for this reason.

Preventing and managing the disease

Commercial growers should read and follow all application instructions in the Midwest Vegetable Production Guide.