Rani Bhattacharyya is an Extension educator and Xinyi Qian is the UMN Tourism Center director. 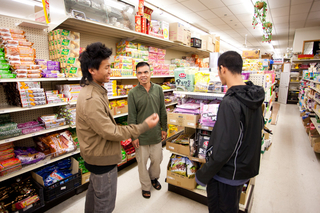 In current conversations about immigration to and settlement of Minnesota, many stories have centered on how American Indian communities and African American slaves bore the brunt of the cost of economic development in the state. They were dehumanized, and in the case of tribal communities, separated from their native land.

What many residents here may not know is that at the same time North America was being colonized, many countries in Asia were subjected to the same harmful effects of colonization by European countries and their trade companies. Descendants of communities that endured this trauma are still overcoming it. We are reclaiming our basic human rights to self-determination.

Our stories are unique in that we carry within us value systems that are still rooted in traditional eastern worldviews. They center on the preservation of family, culture, and community vitality. Despite the colonization we have experienced, we have grafted onto these roots the values of education and intergenerational wealth building. Doing so allows us to deepen our connections to the Asian diaspora in Minnesota and with the larger Asian community worldwide.

Early Asian immigrants understood and accepted the value that education could provide. Education could change not only their own economic standing, but also the family members they left behind, and the families they wanted to establish in Minnesota.

More recently since the turn of the century, the Asian American and Pacific Islander community has grown in Minnesota. This is due to the addition of refugees from countries in Asia experiencing ongoing internal strife and oppression. According to the most recent data, Asians accounted for 28% of total population growth in Minnesota since 2010, second only to those who indicated Mixed Race status, which accounted for 30% (CAAL, 2019).

Within this Asian demographic, there is also a diversity of ethnic groups that cross designated Asian country borders. Two of these include the large Hmong and Karen populations that have immigrated to Minnesota as refugees. This refugee status presents unique challenges in stabilizing their families and communities — they fled not by choice but out of necessity.

How can you engage more meaningfully with your Asian neighbors and colleagues this month? Please keep in mind that we are not one homogeneous set of individuals representing a “model minority.” As immigrants or descendants of immigrants, we can only be supported and helped by the larger community of Minnesota when we are seen. Seen as people that carry rich histories and experiences that, besides our life here, also inform our individual sense of purpose, self-worth, and community value that are not all that different from your own.